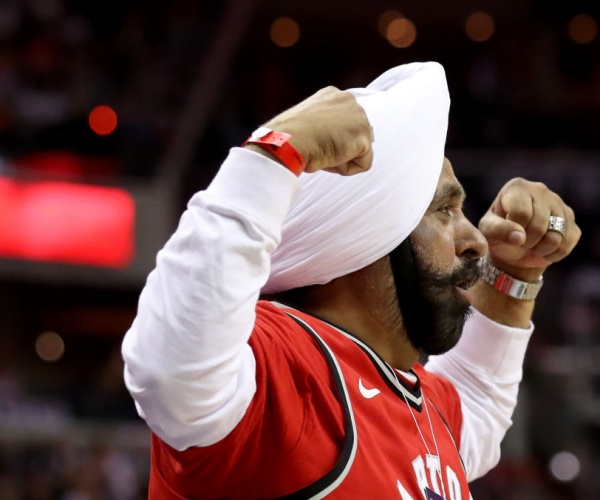 The infusion of politics and social grievances into sports has removed the entertainment element from watching games — especially in professional sports. But something happened earlier this month that may offer some hope.

Kobe Bryant, Tim Duncan, Kevin Garnett and Tamika Catchings were among those inducted into the Naismith Memorial Basketball Hall of Fame on Saturday, May 15.

But one name left everyone scratching their head — Nav Bhatia. The head-scratching only intensified after taking a look at him. A pudgy, funny-looking 69-year-old man sporting a full beard, a turban and a huge smile.

Toronto Raptors ”superfan” Bhatia became the first fan to be honored in the Naismith Basketball Hall of Fame. His story inspires, because although he lives in Canada, he embodies everything that used to be America.

Joe Pompliano, who writes Huddle Up, a daily newsletter reporting the business end of sports, tweeted a lengthy thread describing the ”Nav Bhatia story,” which was picked up by Twitchy editor Samantha Janney.

In 1984, Bhatia escaped his native India’s political and social unrest to immigrate to Canada with an engineering degree in hand. But prospective employers found the beard, accent and turban off-putting.

As Pompliano describes it, ”After spending months applying to hundreds of jobs with no luck, Nav Bhatia finally accepted a job as a car salesman. It was in the rough part of town, and he was severely overqualified, but his mission was simple: ‘To prove hard work trumps hate.”’

Despite the descent from engineer to jalopy peddler, Bhatia made the best of it.

”Through a unique combination of hard work, a friendly personality, and some catchy radio ads, Nav Bhatia became the best car salesman in Canada,” Pompliano wrote. ”He sold 127 cars in his first 90 days on the job. That’s a record that still stands today.”

It’s beginning to sound like a Horatio Alger story, right? Raising himself up from humble beginnings with luck and pluck. But it gets better — a lot better.

”After proving his worth as a car salesman, Nav Bhatia was recruited to become the general manager of a larger dealership across town,” the story continues. ”The business was close to bankruptcy, and the current owner felt Bhatia might help turn it around. But there was just one problem …”

If you’re guessing resentment from the current staff, you’d be right.

”When Nav Bhatia arrived at his new gig, all but one of the current employees quit. They refused to work for him. Rather than sulk in his sorrow, Nav Bhatia did what he always did — he got to work.”

He rolled up his sleeves, hired new staff, and turned the once-failing business into one of the largest and most successful dealerships in Canada. Then he bought both that dealership as well as the one that gave him his first chance.

Within 10 years of arriving in Canada, Bhatia was a millionaire, which ”gave him the financial flexibility to pursue his other passion — basketball.”

He purchased season tickets to Raptors games. Although the team stunk, he’d be the first to arrive, the loudest to cheer, and the last to leave. He never missed a game.

Bhatia’s loyalty didn’t escape notice of Isiah Thomas, the Raptors’ general manager. Thomas eventually called him to center court at a game halftime and gave him a new official title: Superfan. Bhatia was proud and elated.

It paid off again in 2018 when the Raptors won its first NBA title. The team presented him with a championship ring — the first time a fan had received one in NBA history.

He adds, ”In the end, this is what sports are all about. They have a unique ability to bring different people, personalities, cultures, races, and religions together, uniting everyone’s passion toward one common goal — winning.”

Well, sports used to do that. America’s descent in this regard began when former NFL quarterback Colin Kaepernick took a knee during the national anthem. It soon spread to every franchise in the league and poisoned other sports — especially basketball.

Players became pampered millionaires whining fake grievances. They forgot what it is to be an American.

They could learn again from an Indian-Canadian, who started with nothing in a strange country, accepted life’s slings and arrows, fought on without complaint to achieve success, and then gave back. That’s what America used to be.

On March 17, we were all Irish. On May 5 we were all Mexican. How about on July 4 we become Americans again? And this time, stay that way.

Michael Dorstewitz is a retired lawyer and has been a frequent contributor to BizPac Review and Liberty Unyielding. He is also a former U.S. Merchant Marine officer and an enthusiastic Second Amendment supporter, who can often be found honing his skills at the range. Read Dorstewitz’s Reports — More Here.