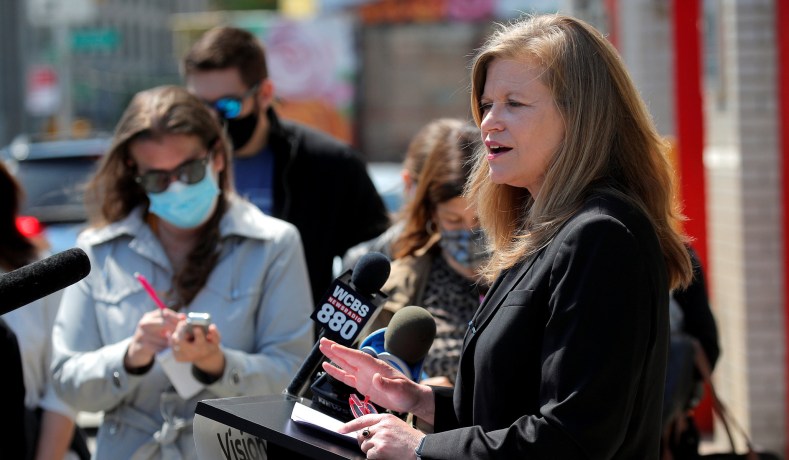 New York City’s new ranked-choice voting system (RCV) is looking like it may deliver the mayoralty to Kathryn Garcia, even though the morning after the Democratic primary she was in third place, behind both former liberal cop turned law-and-order candidate Eric Adams and MSNBC socialist Maya Wiley, who was endorsed by Alexandria Ocasio-Cortez. Garcia positioned herself as the managerial competence candidate, an argument that won over the New York Times, and cited her experience as a city administrator. So what part of the metropolis did she run? Er, the Sanitation Department. Under Bill de Blasio. If you want to know whom to thank for the pristine quality of our streets and sidewalk, which gleamed especially brightly in the last few years, look no further.

Adams had such a large lead after the in-person ballots were counted — with 84 percent of ballots counted, he was up 9.4 percent over Wiley and 12 percent over Garcia — that I and many other observers assumed that he was a shoo-in to be the Democratic nominee in a city in which Democrats have won the last two mayoral races by more than 30 percent and in which the Republican nominee in November will be a talk-radio host, Curtis Sliwa, with a lot of name recognition but no government experience. The Republican party has essentially given up in New York City, which created an open lane for a celebrity candidate.

Today it looks like Garcia is in an excellent position to overtake Adams and become the presumptive next mayor of New York City. After RCV was taken into account today, all but two candidates were eliminated in a complex process that went on for ten rounds, until the extremist Wiley (who campaigned on defunding the police) was finally eliminated, leaving only Adams, with 51.1 percent of the vote, and Garcia, with 48.9.

Now for Act III of this epic: absentee ballots. These have to be postmarked by June 22 but are being given until July 6 to arrive. There could be as many as 124,000 of them to be counted, yet Adams enjoys only a 16,000 vote edge. If I were him, I’d be sweating, and not only because it was 95 degrees today.

Who are the absentees? I’m guessing most of them are people who could afford to leave the city and get their ballots mailed to them. In other words, wealthy Hamptonites and Palm Beach socialites and the rest of the cocktail class from Manhattan, the only borough that voted for Garcia on Election Day. As a group these people tend to be doubly hated by the left-behinds, both for being rich enough to be able to afford weekend homes and for creating a scary, vacant playground for criminals with their absence from the city. Midtown is to this day largely deserted, although traffic is up considerably from the absolute nadir in the worst days of the pandemic last April.

Adams, who would be the second black mayor of New York (Garcia would be the first woman), was the clear choice of the city’s black voters and its working class, but in a massive twist, he might well be defeated by the candidate of the white gentry that reads the New York Times and uses “summer” as a verb. There is going to be a lot of anger and bewilderment if Garcia surges ahead of Adams to win, and I think she probably will.

What then? Adams has already indicated that he is perfectly willing to fan the flames of race resentment, as he did when Garcia and Andrew Yang campaigned together, so get ready for some nastiness. Adams has also hinted Trumpishly that the system itself is biased against him, but he may actually have a point. My lawyer colleague Dan McLaughlin supposes there is cause to allege a violation of the Voting Rights Act, so I fully expect this race to end up being litigated.

In other words, even for New York City this election is looking pretty spicy, with race, sex, and class all in the mix, not to mention a bafflingly complex voting system. I wouldn’t be surprised if this turns out to be the last as well as the first time that RCV is used in this town.