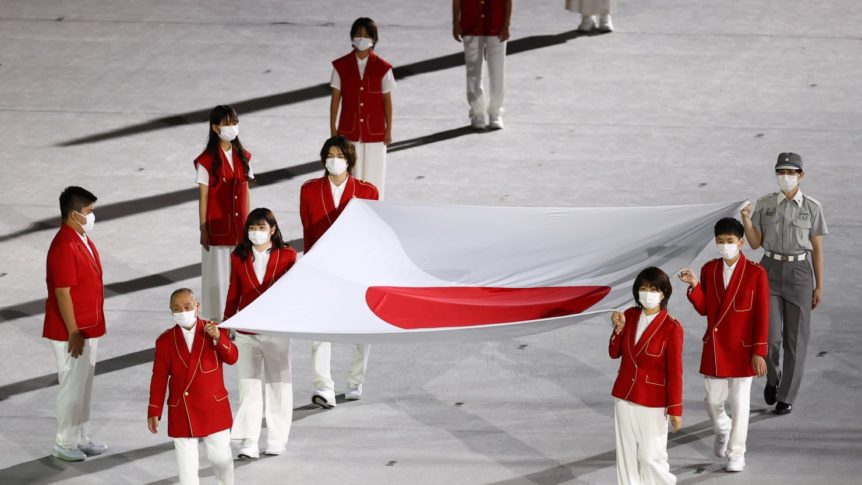 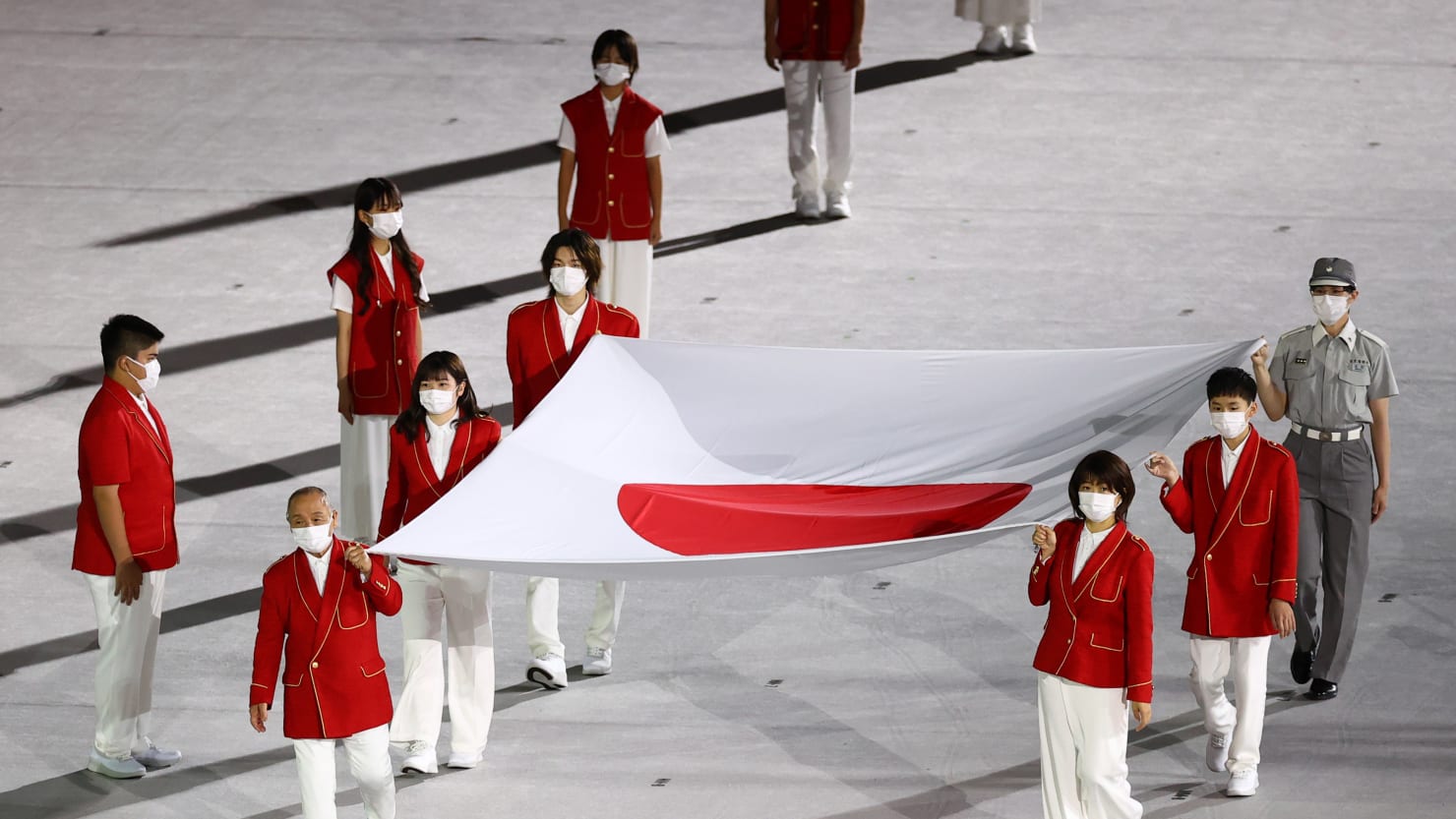 TOKYO—The Tokyo 2020 Olympics and Paralympics, which are supposed to celebrate the world’s diversity and harmony, have been plagued with scandals—and COVID-19. They’ve come to symbolize xenophobia, discrimination, and cruelty—and Friday night, we can add homophobia and historical revisionism to the mix.

It’s no surprise that Japan’s pacifist Emperor Naruhito and his wife, Masako, the empress, wanted to skip the Opening Ceremonies. The emperor stealthily voiced his concerns that the Games would be bad for Japan a month ago and his worst fears are coming true.

At tonight’s opener, the organizers used the music of Koichi Sugiyama, a notoriously homophobic and ultranationalist Japanese composer—despite warnings that it might go over very badly.

Sugiyama is a composer best known for his music created for The Dragon Quest game series, but he’s also well-known for his extremist views. He has worked with LGBTQ-bashers like the Liberal Democratic politician Mio Sugita. He’s denied the Nanjing Massacre by Japanese troops in the late 1930s. He has stated that the Korean women who were working as sexual slaves to the Japanese empire were actually happy-go-lucky prostitutes. He’s a misogynist who does not believe in the equality of the sexes, and a homophobe who doesn’t believe children should be taught about homosexuality or that LGBTQ people should receive government support as “they don’t produce children.”

He’s also hosted a show on an arch-conservative television network in which he and Sugita shared laughs about the plights of racial and ethnic minorities. Sugita has also ridiculed journalist Shiori Ito, who was allegedly raped by a biographer of former Prime Minister Shinzo Abe. Sugiyama keeps strange company.

Many would argue that you can separate the artist from their art, but in Games that are supposed to celebrate diversity, what sane person would use the music of someone who vocally opposes it? Certainly, his remarks about Japan’s well-documented war crimes are not sowing harmony.

At 8:38 p.m., the opening bars of a familiar-yet-dreaded song sounded through television sets around the world as the first Olympic athletes entered the new National Stadium to the theme of Dragon Quest.

Nikkan Sports, a daily newspaper, immediately identified the tune when covering the stadium’s preparation for the opening of the Games. With the Japan Olympic Committee and related organizing committees still licking the wounds of two scandalous dismissals of creators involved with the ceremony, a Nikkan reporter asked an Olympic personnel about the music.

“We sometimes use dummy songs to camouflage entrance practices,” the staff replied.

That was a lie.

Whoever is in charge of personnel vetting for the Tokyo 2020 Olympics has failed spectacularly these past few days.

These Opening Ceremonies were a disaster before they even started. In the last week alone, things took a turn for the horrific.

On Monday, the composer for the Olympic Opening Ceremony, Keigo Oyamada, resigned when magazine interviews resurfaced of him gleefully recounting his sexual assault, assault, and attempted murder of fellow students with disabilities during his youth.

Two days later, the disgraced musicians director for the Opening Ceremonies, Kentaro Kobayashi, resigned after old footage of his comedy performance revealed him referring to the Holocaust as a “let’s massacre Jewish people game.”

Rabbi Abraham Cooper, a Simon Wiesenthal Committee associate dean and global social action director, pointed out that the Nazis also murdered the disabled in concentration camps, and joking about their killings was highly inappropriate, especially for these Games. The Paralympics are supposed to celebrate people with disabilities, not revile them. Not only that, the Nazis also murdered homosexuals. Is the secret theme of the Tokyo 2020 Olympics an ode to the Nazi Germany 1936 Berlin Olympics? Someone please ask the International Olympic Committee.

The Tokyo 2020 organizing committees had known opposition leaders and civilians were beginning to catch wind of Sugiyama’s ultra right-wing views. On Thursday, Twitter posts and news reports foretold the public’s anxiety that this song would add insult to this week’s shame. Perhaps it was too late to change the entrance anthem? Maybe the Japan Olympic Committee thought it wouldn’t be fair to the athletes that practiced marching in an orderly manner to the nostalgic beat.

It’s a shame the same consideration wasn’t extended to the memory of the 100,000 to 300,000 civilians and surrendered soldiers of Nanjing, China, who were killed by the Japanese Imperial Army during the Second Sino-Japanese War, nor the 20,000 women and girls of the city who were raped, mutilated, and killed in the process. What of the thousands of civlian women and girls that were forced into sexual slavery as “comfort women” during Japan’s occupation of East and Southeast Asia?

The Comfort Women Action for Redress and Education responded to the use of Sugiyama’s music on Twitter. “The Olympics claims to stand for ‘friendship, respect and excellence.’ Sugiyama’s denial and dismissiveness of young women and children who were victims of rape during devastating world war violates those principles. Many other Japanese artists can better represent humanity.”

The Tokyo 2020 Olympics were supposed to be a showcase of all that’s good about Japan. But through carelessness, greed, and incompetence, it keeps showing that Japan is run by an ossified elite who lack an understanding of basic human rights, tolerance, and common sense. Prime Minister Abe, who helped facilitate the winning bid for the Olympics (as did several millions in bribes), once tried to push Japanese soft power–cultural assets–as “cool Japan.” These Olympics seem hell-bent on proving that “cool japan” is stone-cold dead, and all we are left with is “cruel Japan.”

Who knows what will go wrong next?

The organizers have given us an Opening Ceremony with the theme of “Moving Forward,” and “United by Emotion,” but it has been orchestrated by an anti-LGBTQ history revisionist, directed by a comedian and thespian who found hilarity in the slaughter of six million Jews, and had a composer that relished in the humiliation and torture of disabled classmates. So much for the Olympic tenets of inclusivity and world peace.