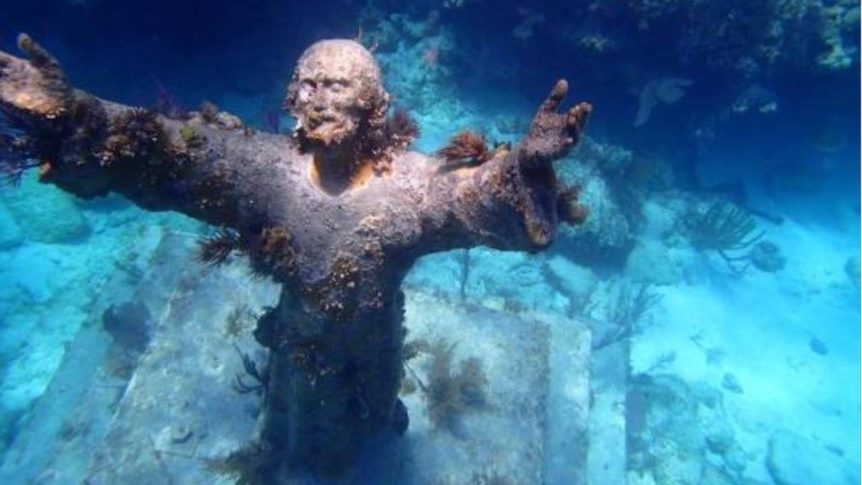 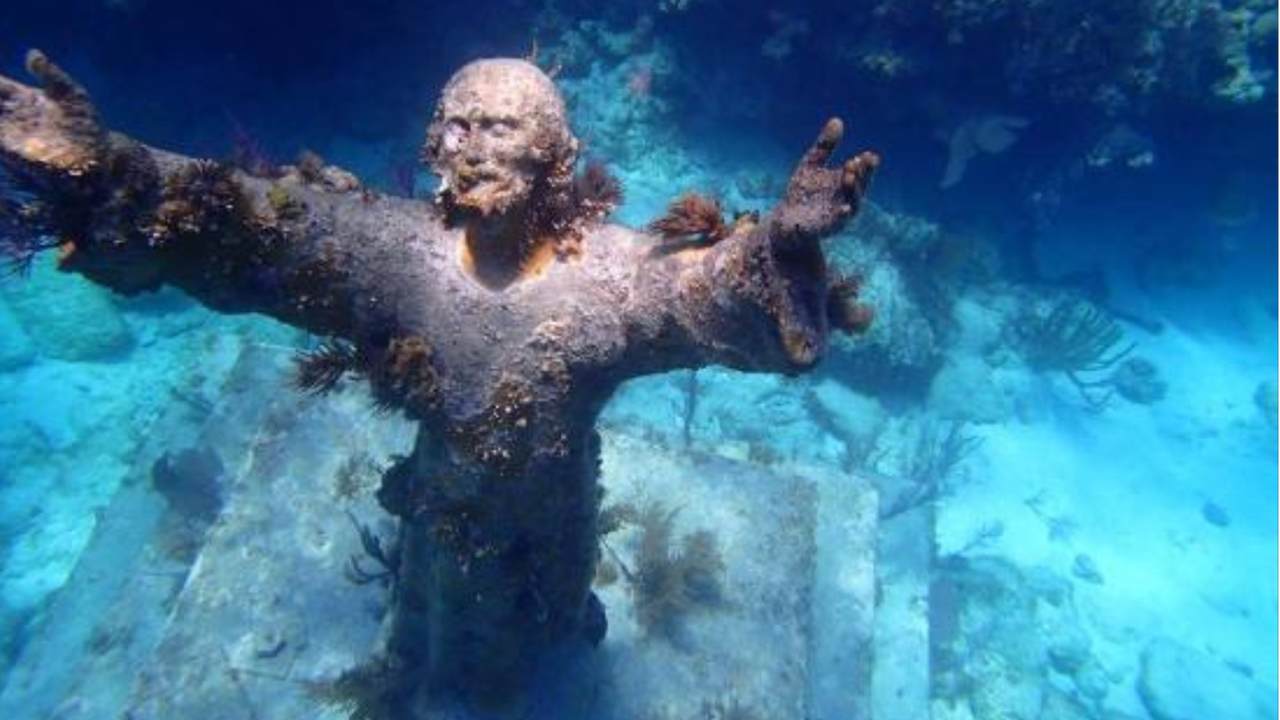 Thanks for joining us as we conclude our two-part study about what the Bible says about water. Last week we covered the Old Testament and now the New. If you missed last week’s study, please read it first since the New Testament’s verses are grounded in the Old.

However, before diving in, a message from our sponsor John Pennekamp Coral Reef State Park in Key Largo, Florida. (Just kidding about the sponsor, but the message is on topic.)

At the “park,” six miles offshore and submerged in 25 feet of water, is a 4,000 pound, 8.5-foot tall, bronze statue of Jesus. With His face tilting toward the surface, and arms outstretched, Jesus appears to be embracing the boatloads of snorkelers who look down upon Him. This famous, top-rated dive site is named either Christ of the Abyss or Christ of the Deep, and even those with no faith in Jesus find the statue inspiring.

I reference the beloved statue because the open arms symbolize the triangular relationship between us, Jesus, and water. It is through water that you come to Him. Let’s begin with Christ’s first New Testament adult appearance during which He receives the water of Baptism, marking the beginning of His Messianic ministry:

“Then Jesus came from Galilee to the Jordan to be baptized by John. But John tried to deter him, saying, ‘I need to be baptized by you, and do you come to me?’ Jesus replied, ‘Let it be so now; it is proper for us to do this to fulfill all righteousness.’ Then John consented. As soon as Jesus was baptized, he went up out of the water. At that moment heaven was opened, and he saw the Spirit of God descending like a dove and alighting on him. And a voice from heaven said, ‘This is my Son, whom I love; with him I am well pleased’” (Matthew 3:13-17).

To what was Jesus referring when he said, “it is proper for us to do this to fulfill all righteousness?”

For a quick, concise answer, I will quote from a lengthy piece headlined, “What is Baptism? Its Meaning & Importance in Christianity” — found on Townhall’s sister site Christianity.com, that reads: “The Lord chose to affiliate Himself with sinful man. When we follow His example in the waters of baptism, we’re publicly confessing our faith in the Savior and identifying ourselves with Him.”

Those words are reflected in the Gospel of John when Jesus was teaching Nicodemus who was “a member of the Jewish ruling council.” Jesus said, “Very truly I tell you, no one can enter the kingdom of God unless they are born of water and the Spirit” (John 3:1-8).

At Christ’s baptism, He took on our sin-debt, for which He would later die on the cross. Consequently, after believers in Jesus Christ receive the water of Baptism, those who do the will of the Father are given eternal life.

The Apostle Peter writes it was baptismal water that saved Noah and his family:

“In [the ark] only a few people, eight in all, were saved through water, and this water symbolizes baptism that now saves you also—not the removal of dirt from the body but the pledge of a clear conscience toward God. It saves you by the resurrection of Jesus Christ, who has gone into heaven and is at God’s right hand—with angels, authorities and powers in submission to him” (1 Peter 3:20-22).

John’s Gospel records more of Jesus’s teaching about the meaning of water and believing in Him as illustrated in the well-known exchange about the woman at the well. After Jesus asks a Samaritan woman for a drink she questions His request:

“Jesus answered her, ‘If you knew the gift of God and who it is that asks you for a drink, you would have asked him and he would have given you living water’” (John 4:10).

Three chapter later, Jesus repeated that truth while teaching in the Temple courts:

“On the last and greatest day of the festival, [Feast of the Tabernacles] Jesus stood and said in a loud voice, ‘Let anyone who is thirsty come to me and drink. Whoever believes in me, as Scripture has said, rivers of living water will flow from within them ’” (John 7:37-38).

You might remember from last week the phrase “living water.” As referenced in the Old Testament it means God and also the spirit of God that is to come, as prophesied in Zechariah 14.

Water, created by God on the first day is what sustains life. Therefore, when believers come to Christ, they are bathed in and receive living water that sustains them. Then, guided by the Holy Spirit and through obedience, believers are saved from sin and promised eternal life.

For further study, there are numerous New and Old Testament passages that mention water and you can start here.

We conclude with a sing-along of the hymn “Water of Life” written by Stephen Dean. His magnificent and inspiring lyrics beautifully summarize today’s Bible study:

Refrain: Water of life, cleanse and refresh us; Raise us to life in Christ Jesus.

1. All you who thirst, come to the waters, And you will never be thirsty again. Refrain:

2. As rain from heaven, so is God’s word, it Waters the earth and brings forth life. Refrain:

3. Dying with Christ, so we shall rise with him. Death shall no longer have power over us. Refrain:

4. Turn to the Lord, cast off your wickedness, You will find peace in his infinite love. Refrain: