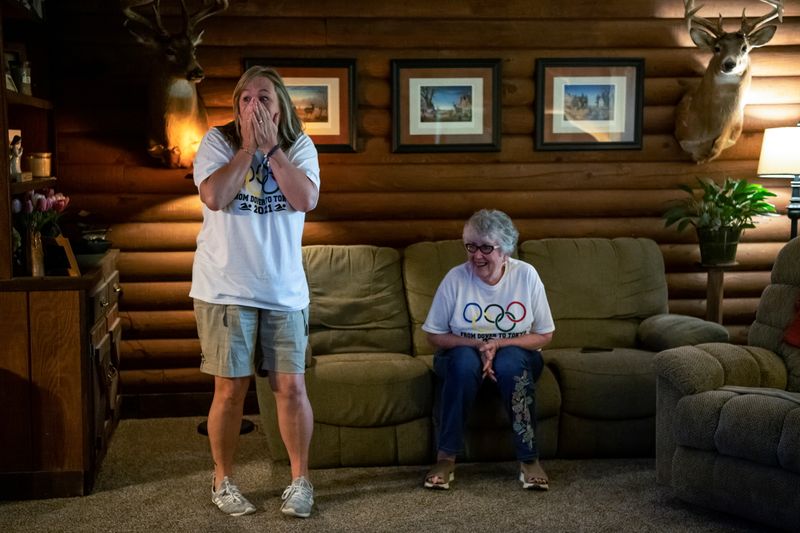 Edie Armstrong reacts when she hears that her son, U.S. swimmer Hunter Armstrong, will be moving on after just making it through the men’s 100m backstroke preliminary race during the 2021 Olympic Games, in Dover, Ohio, U.S., July 25, 2021. “That gave me a small heart attack,” Edie Armstrong said jokingly. “Don’t ever do that to me again Hunter.” Picture taken July 25, 2021. REUTERS/Gaelen Morse

DOVER, Ohio (Reuters) – The parents and grandparents of Olympic backstroke swimmer Hunter Armstrong could not travel to see the 20-year-old compete in Tokyo because of COVID restrictions. Like millions of others, they watched on TV.

It was 8 p.m. in Tokyo and 7 in the morning in small-town Dover, Ohio, and Armstrong was vying for one of sixteen spots in the 100 meter backstroke semifinals.

Hunter’s mom Edie, dad Ryan, and grandparents Karen and Tom gathered in the family room, where Olympic rings hang from the mantel. Karen, who always touches Hunter’s shoulder before a race, touched the TV.

Deer heads decorate the home. The dad is a hunter; Hunter is not. The family all wore t-shirts: “From Dover to Tokyo” on the front, and on the back: “Invictus Maneo,” which means “I remain undefeated.”

The pandemic kept the family apart this Olympics, but the year’s delay to the Games enabled Hunter to join the team, one of two backstroke specialists on Team USA.

Flags over the pool tell backstroke swimmers when a turn is coming up. Hunter was late seeing the flag and did not turn well, but still qualified for the semis, tying for 15th place.

“I knew he had it in him, but having the potential and getting it out are two different things,” said dad Ryan Armstrong, a sales executive for a plastics company.

Mom Edie was pacing nervously and left the room for a few minutes.

“Don’t ever do that to me again,” she said. “That gave me a small heart attack.”

With half a day until the next race, Hunter was getting a massage when he called his family via FaceTime. He told them about the missed flags.

“Well, I got my first Olympic swim under my belt,” he said, vowing to get back to work.

The U.S. swim coach, Gregg Troy, chimed in. “Get a good meal, get a good rest, get your ass in gear.”

Night-time in Japan was midday in Ohio. The family headed to the First Moravian Church for Sunday service, finding a sea of Armstrong t-shirts. The congregation joined another FaceTime call.

The community had helped Hunter reach the Olympics. The swimmer would hate to disappoint the town, said Brenda Wherley, who coached Hunter from age six to 18.

Later on Sunday, Wherley organized a watch party at Dover High School. About 130 people came to watch the backstroke semifinal.

Hunter missed getting into the final by one one-hundredth of a second. His Olympics was over.

The crowd was momentarily dejected, but soon broke into applause.

Wherley is looking ahead to the 2024 Paris Games, which she plans to attend in person. Twenty is young for a swimmer, his family pointed put.

“In three years, I think he’s going to look like what Ryan Murphy is now,” said Wherley, referring to the current U.S. swimming star.