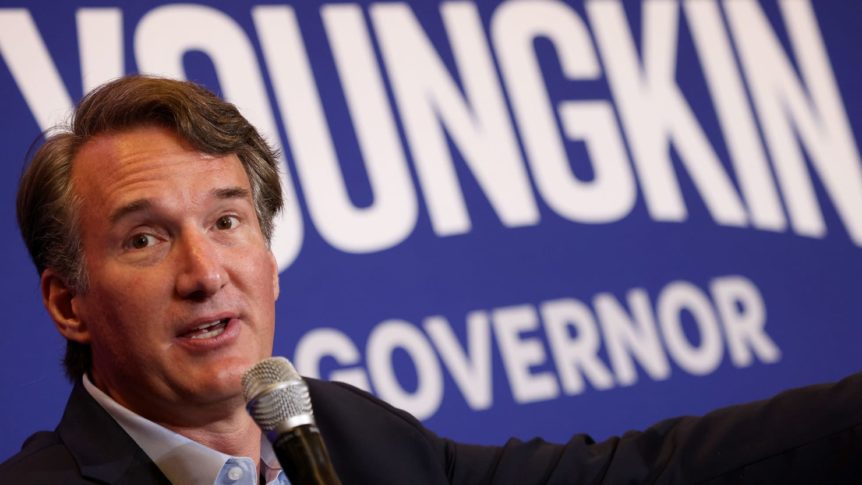 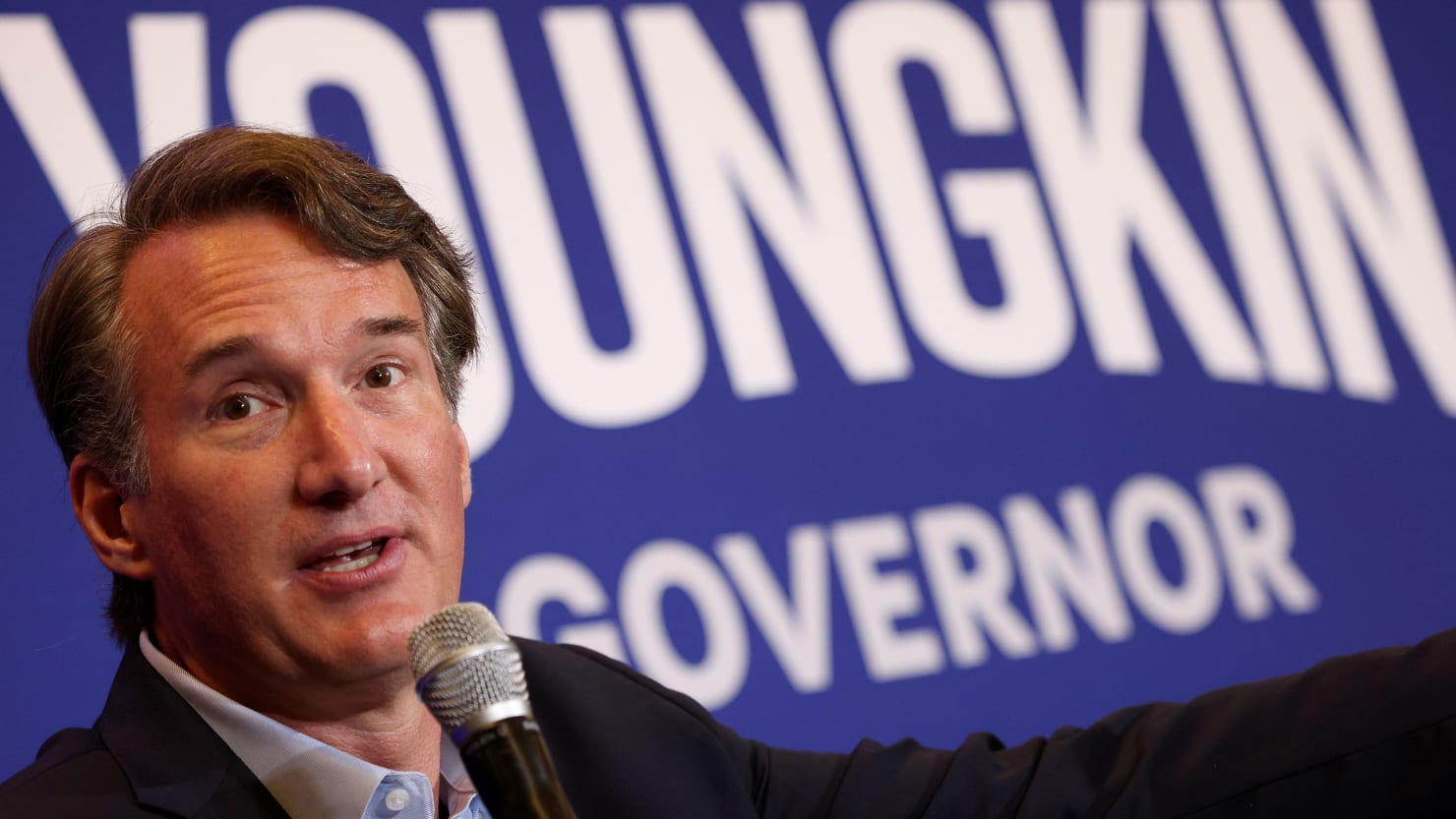 What happens in Virginia doesn’t stay in Virginia. The party whose candidate wins the November governor’s race gets a big boost heading into next year’s midterms, and that’s heightening the stakes between former Democratic Governor Terry McAuliffe, vying for a rare comeback, and Republican Glenn Youngkin, a wealthy newcomer to politics prepared to spend $75 million of his own money to win.

With President Biden in northern Virginia on Friday to campaign in the vote-rich suburbs with McAuliffe, Democrats aren’t leaving anything to chance. Campaign operatives say this is just the opening round. There will be more visits. Biden won Virginia by 10 points, and together with McAuliffe, a known figure who is popular in his own right, the two moderate-to-liberal leaders are a force multiplier that Democrats are counting on to keep the once reliably Republican state that limits governors to one consecutive term in the blue column.

With Biden such a visible presence, will ex-President Trump be tempted to show up for Youngkin and make the race mano-a-mano? “The Democrats would pay for Trump to come to Virginia. They’d love to see him in the state,” says Stephen Farnsworth, Director of the Center for Leadership and Media Studies at Mary Washington University. “For Youngkin, that wouldn’t be helpful. Every day Trump is part of the national conversation is a good day for McAuliffe and the Democrats.”

The challenge for Democrats in this off-year election—when turnout historically drops most sharply for young adults and African Americans— is to keep the Trump years on the agenda and voters motivated to show up. There is no better foil than Trump to keep these strongly Democratic voters energized and engaged.

McAuliffe governed the state ably from 2014 to 2018, winning plaudits from progressives for restoring the voting rights of 173,000 former felons and vetoing a barrage of GOP bills to restrict abortion rights. He never had a Democratic House of Delegates or Senate, and says his impetus to return as governor is to implement the liberal agenda that Republicans blocked. Democrats are sitting pretty in Virginia, controlling the state house and both chambers of the legislature since 2019. McAuliffe’s successor, Ralph Northam, a physician who resisted calls to resign after a medical school photo of him in blackface surfaced, saw his approval rise to almost 80 percent at the height of the pandemic. It’s now a healthy 61 percent.

Don’t worry, be happy could be the Democrats’ mantra. Still, McAuliffe at age 64 is attempting a comeback that’s only been done once before in 100 years, plus he’s trying for a second time to break the curse where Virginians routinely elect a governor from whichever party does not hold the White House. And, adds Farnsworth, “Anybody who looks at the last decade of politics is inclined to believe one shouldn’t leave anything to chance.”

The challenge for Youngkin is to come across as different enough from Trump to have some appeal in the suburbs, yet not so different that he loses the Trump base. The 54-year-old former co-CEO of The Carlyle Group, a private equity powerhouse holding over a quarter trillion dollars in assets, has no track record in politics or on issues but after winning the GOP primary in May, he said he was “honored” to have Trump’s endorsement and that “President Trump represents so much of why I’m running.”

Trump reciprocated with tweets touting Youngkin as a “great candidate” running against a “political hack,” praise that interrupted Youngkin’s pivot away from Trump.

“Youngkin has not had a good summer,” says Larry Sabato, founder and director of the Center for Politics at the University of Virginia, critiquing the candidate’s futile effort to distance himself from Trump, especially on the abortion issue. (Youngkin was caught on tape by a liberal activist posing as a pro-life supporter saying he couldn’t talk in the campaign about restricting abortion because he needed the votes of suburban Independents, but that he would go “on offense” after he won.)

“He brought it on himself saying he was so honored to get the endorsement, and that Trump’s policies and actions were why he got in the race. He reminds one of a little kid who goes behind the couch and thinks nobody can see him. You can’t say things and assume there’s no record of it or that people won’t remember.”

Youngkin is running a stealth campaign, relying on paid television advertising where he doesn’t even mention he’s a Republican, let alone invoke Trump. The most publicity he’s gotten in recent days is for ducking the traditional kickoff debate in late July hosted by the Virginia Bar Association. His reason: moderator Judy Woodruff gave $250 in 2010 to a Haitian relief fund co-founded by Presidents Clinton and George W. Bush.

“Talk about a thin reed,” Sabato told The Daily Beast. “People can see right through that. He’s afraid to debate. He doesn’t know much about governing. They’re keeping him in front of friendly crowds, and they can’t keep doing that.” Sabato’s Crystal Ball ranking has Virginia leaning, not likely Democrat. “After 2016, you can’t take anything for granted,” he said.

The biggest advantage that Youngkin has is his limitless bank account. He has already put $12 million of his own money into his campaign, and he has assured his backers that he’s prepared to up that figure to $75 million. To put that in perspective, Democrat Ralph Northam and Republican Ed Gillespie spent a combined $66 million in the gubernatorial election four years ago, so Youngkin aims to spend more than that alone from his own bank account, plus whatever he might raise above that. “Youngkin’s fundraiser is lunch with his accountant,” quips Sabato.

Youngkin ran on “election integrity,” a phrase that signaled fealty to Trump but doesn’t play well in Virginia, where expanded access to voting has delivered Democratic majorities and there’s no indication that voters are ready to turn back the clock. Youngkin has suggested eliminating Virginia’s income tax but hasn’t said how he would make up the lost revenue. His economic adviser is Stephen Moore, a mostly discredited voice on economic issues who failed to get enough Republican votes in the Senate after Trump nominated him to the Federal Reserve.

Democrats are feeling good about this race, but Jesse Ferguson, a Virginia-based Democratic consultant, cautions against taking victory for granted. He points out that there are large pockets of Republican voters in the state, and that Virginia will never be as blue as California or New York or even neighboring Maryland. Analysts could under-estimate Youngkin’s ability to sell himself as an idea whose time has come, a fresh face in Virginia politics with no obvious sharp edges. He appeals to the GOP’s social conservatives and traditional business establishment types. Plus, he is on TV “trying to remake himself—in a way that Democrats don’t have the resources to match—into a non-Trump-tainted ‘normal’ candidate for office, hoping no one looks under the hood,” says Ferguson.

“For people who are paying attention, he is losing the race every day. But for those who only watch TV ads, they’re getting swamped with content making him seem like he’s something he’s not.”