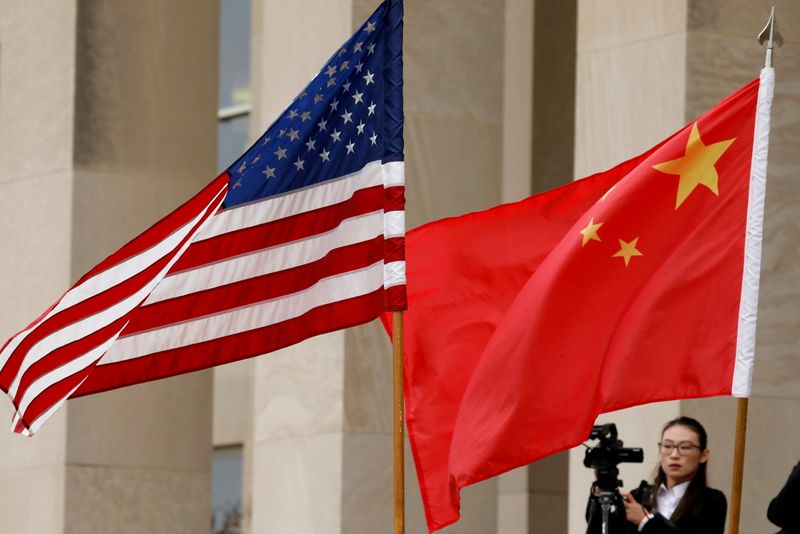 FILE PHOTO: U.S. and Chinese flags are seen before a meeting between senior defence officials from both countries at the Pentagon in Arlington, Virginia, U.S., November 9, 2018. REUTERS/Yuri Gripas/File Photo

By Michael Martina and David Brunnstrom

WASHINGTON (Reuters) – With no indication of a U.S.-China leaders’ summit in the works, nor any outcomes announced from high-level diplomatic talks on Monday, relations between Beijing and Washington appear to be at a standstill as both sides insist the other must make concessions for ties to improve.

U.S. officials had stressed that Deputy Secretary of State Wendy Sherman’s trip to the northern Chinese port city of Tianjin to meet Foreign Minister Wang Yi and other officials was a chance to ensure that stiffening competition between the two geopolitical rivals does not veer into conflict.

But the combative statements that emerged from the meeting – albeit coupled with suggestions from officials that closed-door sessions were marginally more cordial – mirrored the tone set in Alaska in March, when the first senior-level diplomatic talks under President Joe Biden were overshadowed by rare public vitriol from both sides.

While Tianjin did not expose the same degree of outward hostility that was on display in Alaska, the two sides appeared to stop short of actually negotiating anything, sticking instead to lists of established demands.

Sherman pressed China on actions Washington says run counter to the rules-based international order, including Beijing’s crackdown on democracy in Hong Kong, what the U.S. government has deemed is an ongoing genocide in Xinjiang, abuses in Tibet and the curtailing of press freedoms.

“I think it’d be wrong to characterize the United States as somehow seeking or soliciting China’s cooperation,” a senior U.S. administration official told reporters after the talks, referring to global concerns such as climate change, Iran, Afghanistan and North Korea.

“It is going to be up to the Chinese side to determine how ready they are as well to… take the next step,” a second U.S. administration official said of bridging disagreements.

But Wang insisted in a statement that the ball was in the United States’ court.

“When it comes to respecting international rules, it is the United States that must think again,” he said, demanding that Washington remove all unilateral sanctions and tariffs on China.

China’s Foreign Ministry has recently signaled there could be preconditions for the United States on which any kind of cooperation would be contingent, a stance some analysts say is a recipe for diplomatic ossification and that leaves dim prospects for improved ties.

Bonnie Glaser, an Asia expert at the German Marshall Fund of the United States, said it was important for the two sides to maintain some form of engagement. At the same time, there appeared to be no agreement in Tianjin for follow-up meetings or mechanisms for ongoing dialogue.

“That will probably leave U.S. allies and partners uneasy. They are hoping for greater stability and predictability in the U.S.-China relationship,” Glaser said.

Both sides are likely to be disappointed if they expect the other to give in first, she added.

There has been some expectation in foreign policy circles that Biden could meet Chinese leader Xi Jinping for the first time since becoming president on the sidelines of a G20 summit in Italy in October.

White House spokeswoman Jen Psaki said the prospect of a Biden-Xi meeting did not come up in Tianjin, though she added that she expects there will be some opportunity to engage at some point.

Indications are, meanwhile, that the Biden administration may scale up both enforcement actions impacting Beijing – such as cracking down on Iranian oil sales to China – and coordination with allies in the context of countering China, including another summit later this year that Biden is keen to host with the leaders of Japan, Australia, and India.

Biden’s White House also has given few signals that it intends to roll back tariffs on Chinese goods established under the Trump administration.

At the same time, cooperation on the COVID-19 pandemic seems almost entirely out of reach, with the United States calling Beijing’s rejection of a World Health Organization plan for further study of the virus’ origin “irresponsible” and “dangerous.”

There has been little sign either of a willingness by China to cooperate with Washington on the climate issue, a priority for Biden, despite energetic entreaties by U.S. climate envoy John Kerry.

“What was on display in Tianjin is that both sides are still very far apart on how they view the value and role of diplomatic engagement,” said Eric Sayers, a visiting fellow at the American Enterprise Institute.

Scott Kennedy, a China specialist at Washington’s Center for Strategic and International Studies,, said neither side saw much upside for now in being more cooperative.

“And there’s no low-hanging fruit for cooperation for either side and any gesture toward cooperation actually comes with significant costs, both domestic and strategic,” he said.

“I think we ought to have very low expectations about the two sides finding common ground and stabilizing the relationship in the near future.”