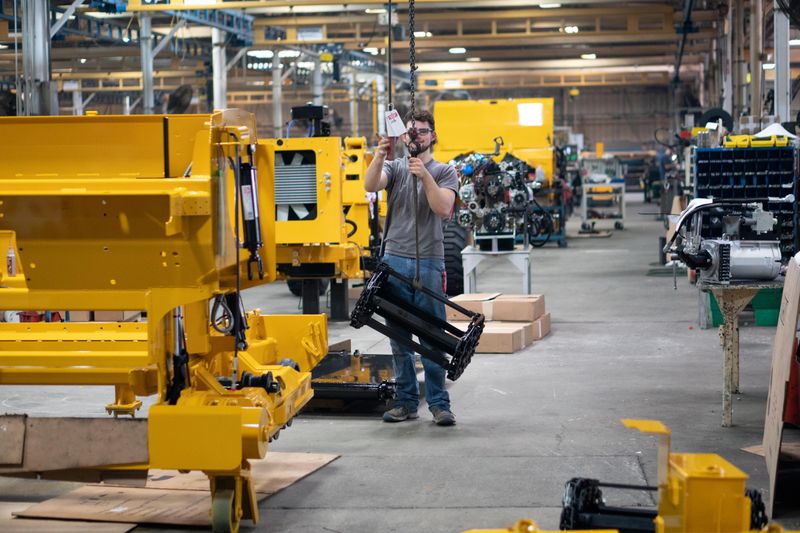 CHICAGO (Reuters) – Calder Brothers Corp is under pressure to raise wages after rivals lured away some of its workers. A few others were also considering jumping ship, but co-owner Glen Calder said the South Carolina-based construction machinery company managed to persuade them to stay by promising a better career.

With willing workers in short supply across the United States and companies frantically vying for them, Calder knows his firm cannot hold off pay increases. At the same time, however, soaring prices for the raw materials used in the asphalt paving machines his company builds have left it with no wiggle room.

American manufacturers of all sizes are grappling with the strongest inflationary pressure in three decades following a relentless rise in raw-materials prices in the past 13 months.

Harley-Davidson Inc said last week it would impose an average pricing surcharge of 2% from July 1 on select models sold in the United States to mitigate the cost pressure, which shaved off 5 percentage points from its profit in the latest quarter. Yet the motorcycle maker expects earnings to suffer in the second half of the year.

Higher commodity prices are eating into corporate budgets, making it tougher for manufacturers to compete in a tight labor market.

Calder Brothers, for example, is paying 50% more for some of its components. Overall, its material costs are up 15% this year. Sales of its machines have recovered but are still below pre-pandemic levels.

The company is now waiting for a 10% price increase to come into effect in the fall to provide some financial leeway to hand out pay raises of 2% to 4%. In the interim, it has bumped up its contribution to its retirement plan for employees.

Calder said his company is one of the best paymasters in Greenville County, where it is located. With the starting pay at $16.80 an hour, its wages are far above state or federal minimums. Yet it has lost 10% of its workforce since last fall.

The equipment maker faces the challenge of retaining workers at a time when it needs more hands to keep up with customer orders. It has been running job ads for four welders, two machinists and five assemblers since February, but has managed to fill just three positions thus far.

The tight labor market has also discouraged Calder Brothers from mandating vaccines for its employees. With just 35% of workers vaccinated on the shop floor and the highly contagious Delta variant of the coronavirus spreading quickly, its operations are at risk.

“In today’s labor market, I really don’t want to do anything to make anybody mad,” said Calder.

American manufacturers have long complained about labor shortages. But until this April, wage gains for production workers failed to keep pace with the overall trend in the economy.

This year, the U.S. labor supply has been further limited by a combination of enhanced jobless benefits, lingering concern about returning to work, childcare issues and pandemic-related retirements as well as career changes.

The number of job openings at manufacturers is at the highest level in two decades, according to data from the U.S. Labor Department. Adding to the challenge, more workers are quitting their jobs than at any time in at least two decades.

Meanwhile, a booming economy has sparked a competitive frenzy as manufacturers are now jostling for workers with companies like McDonald’s Corp and Amazon.com Inc, which are offering higher wages as well as signing bonuses.

As a result, employee wages are projected to rise over the next 12 months at the fastest pace in two decades, according to a survey by the National Association of Manufacturers.

“You either take people off the couch or you take them from other businesses,” said Calder. “It’s not easy.”

Other manufacturers are facing a similar predicament. Georgia-based Win-Tech Inc, which makes parts for Lockheed Martin Corp, last month lost out on a hire after it failed to match the counteroffer from the applicant’s employer.

Allison Krache Giddens, Win-Tech’s president, said the applicant’s employer doubled the salary in response to her company’s offer. With supply-chain logjam inflating her costs, Giddens said there is a limit to what her company can pay to attract workers as it needs to stay cost-competitive.

If the price pressure does not abate, she worries it will crimp her ability to hire workers and expand the business.

“What we will end up doing is not taking on as much work,” she said. “We’re going to take on work so that we can remain profitable and be a successful business.”

The struggle to find workers is not imposing constraints only on manufacturers’ ability to ramp up. It is also contributing to supply and logistics bottlenecks.

Win-Tech has a set of jobs that go out twice a month to California and then return to Georgia for final manufacturing. The whole trip now takes up to two weeks compared with five days earlier as the company’s trucking company cannot find drivers.

Similarly, Calder Brothers is not able to obtain wiring harnesses on time as its supplier is short of workers. To get around the problem, Calder said the supplier has moved the production from South Carolina to Tunisia.