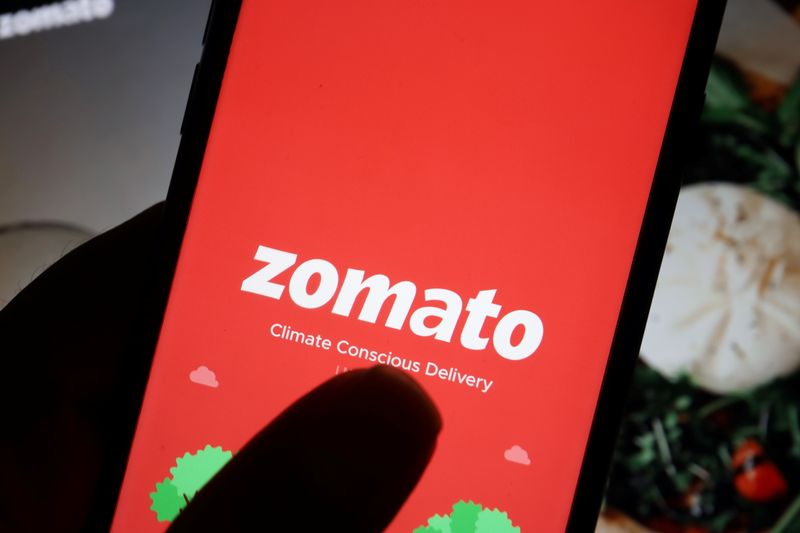 FILE PHOTO: The logo of Indian food delivery company Zomato is seen on its app on a mobile phone displayed in front of its company website in this illustration picture taken July 14, 2021. REUTERS/Florence Lo/Illustration

BENGALURU (Reuters) -Food delivery firm Zomato Ltd shares on Friday nearly doubled in a stellar first listing of a local unicorn in India, setting the pace for a slew of such debuts by internet-based startups that are thriving during the COVID-19 pandemic.

Berkshire Hathaway Inc-backed Paytm, hospitality company Oyo Hotels and ride-hailing firm Ola, both backed by SoftBank, are among the startups set to enter markets, riding on support from foreign funds and local investors.

Shares of Zomato, backed by China’s Ant Group, soared 82.8% after opening at 116 rupees in pre-open trade, a 53% premium to the offer price of 76 rupees for the 93.75 billion rupees IPO, valuing the company at about $12 billion.

“Growth is key here. Zomato might not be profitable but it is growing exponentially and is enviably positioned to keep that momentum,” said Danni Hewson, a financial analyst with AJ Bell, an investment platform in England.

“Being first in a sector that’s been so successful in other countries will whet the appetite even more.”

Zomato is the first startup to go public in India’s food delivery market, which research firm RedSeer estimated is worth $4.2 billion.

The home-grown food aggregator, launched in 2008, operates in about 525 cities in India and has partnered with close to 390,000 restaurants.

It offers home delivery of food, allows customers to book tables for dining-in and collates restaurant reviews, making it a competitor to SoftBank-backed Swiggy and Amazon.com’s food delivery service.