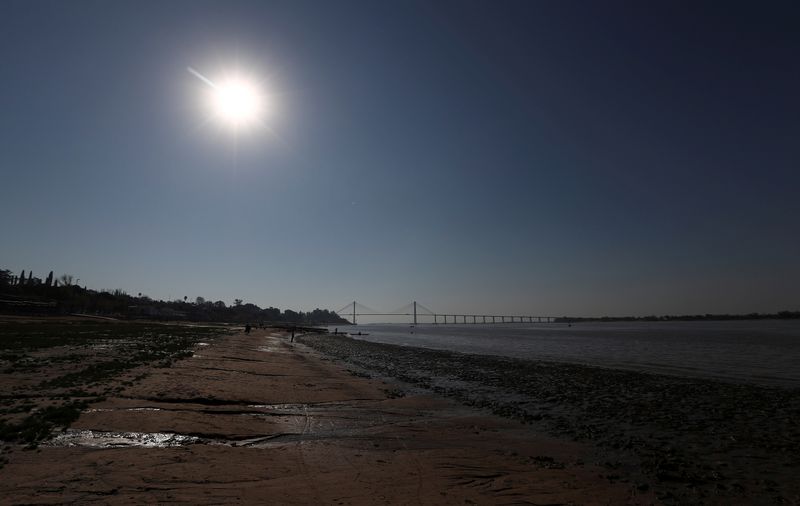 FILE PHOTO: A general view of the Puente Nuestra Senora del Rosario (Our Lady of Rosario) bridge, which links the Rosario city in the Santa Fe Province with Victoria city in the Entre Rios Province, over the Parana River, in Rosario, Argentina July 8, 2021. The lack of rain in Brazil, where the river originates, has brought water levels down in Argentina, forcing cargo ships to reduce the amount of grains that are loaded for export. REUTERS/Agustin Marcarian/File Photo

BUENOS AIRES (Reuters) – Argentina said on Saturday it would dedicate $10.4 million to help ease the pain caused by an ongoing drought that has seen the Parana River, a key transport route for the country’s precious grain crop, wither to its lowest level in 77 years.

Lack of rain in Brazil, where the Parana originates, has sharply reduced cargo traffic and sparked concerns amongst local communities who depend on the river for drinking water and energy. The dryness has also reduced the amount of cargo that can be carried by ships at the height of the Argentine corn and soy export season.

“Impact on the supply and quality of drinking water, navigation and port operations, the ecosystem, fish fauna and the generation of hydroelectric energy is expected,” Argentina’s government said in a statement.

The government said the fund would be dedicated to helping the provinces and communities that depend on the river.

About 80% of Argentina’s agricultural exports are shipped from Rosario ports and down the Parana, out to the Atlantic.

The shallowness of the Parana threatens to cost the country’s grains farmers and exporters almost $315 million over a six-month period through August, the Rosario grains exchange said last week.

Argentina is the world’s No. 3 corn exporter and top supplier of soymeal feed used to fatten hogs and poultry from Europe to Southeast Asia.