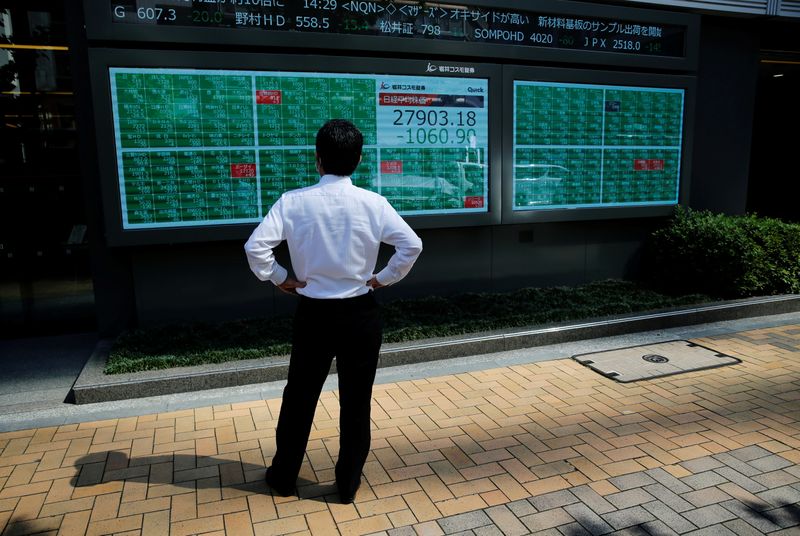 A man watches an electric board showing Nikkei index outside a brokerage at a business district in Tokyo, Japan, June 21, 2021. REUTERS/Kim Kyung-Hoon/Files

SHANGHAI (Reuters) – Asian shares rose and a gauge of global equities hovered near record highs on Wednesday after rising consumer confidence in economic recovery boosted the Nasdaq index to its highest-ever closing level.

Still, Steven Daghlian, market analyst at CommSec in Sydney, said that following the global run-up in equities, markets were “on edge” ahead of the release of U.S. non-farm payrolls data on Friday, the results of which could influence Federal Reserve policy.

“(It looks like) five straight months of gains in the U.S … still around record highs as well, and the end of the month and quarter as well. So that can also create just a little bit more volatility,” said Daghlian.

The market’s continued focus on Fed plans for tapering come as the world’s largest economy continues to rebound from pandemic lockdowns.

U.S. consumer confidence jumped to its highest level in nearly one and a half years in June as growing labour market optimism amid a reopening economy offset concerns about higher inflation. That came even as the Federal Housing Finance Agency house price index shot up a record 15.7% in April from a year ago, corroborating soaring house price inflation.

Overnight on Wall Street, the Dow Jones Industrial Average and S&P 500 gained or 0.03%, and the Nasdaq Composite added 0.19%, hitting its record high close.

At the same time, some investors remain worried about the economic impact of the highly infectious Delta variant of the virus that causes COVID-19.

Indonesia, Malaysia, Thailand and Australia are all battling outbreaks and tightening restrictions, and Spain and Portugal announced restrictions for unvaccinated British tourists.

Underlining the impact of even small flare-ups of new COVID-19 cases, new data showed activity in China’s services sector grew at a slower pace in June as curbs from a resurgence in cases in southern China restrained a rebound in consumption.

“Month-end rebalancing flows may also be at play, but with U.S. equities outperforming in June and in the quarter, the bias would be for USD selling rather than buying,” Rodrigo Catril, senior FX strategist at National Australia Bank, said in a note.