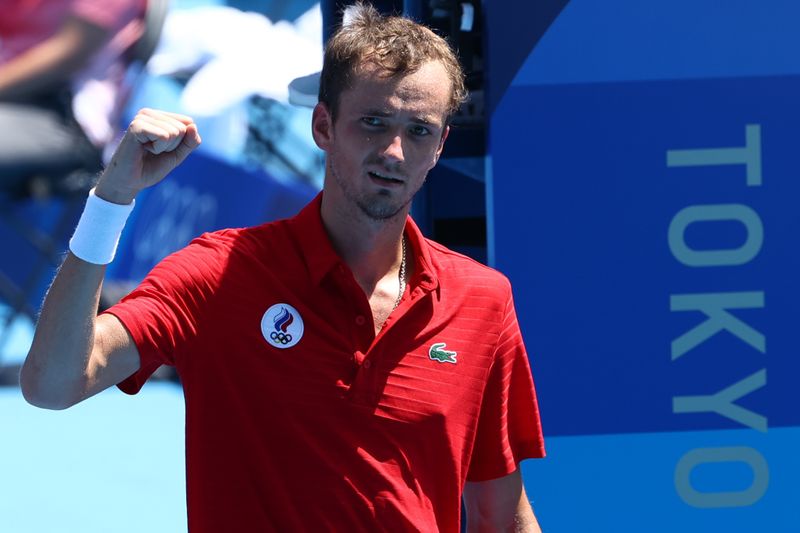 Second seed Daniil Medvedev battled oppressive heat and humidity that required him to take two medical timeouts on his way to beating Fabio Fognini of Italy to reach the quarterfinals of the 2020 Olympics on Wednesday in Tokyo.

The heat index hit 99 degrees as the Russian fought off Fognini 6-2, 3-6, 6-2. Before the third set, the 25-year-old Medvedev cooled off in the shower before returning to the court to finish off the match in two hours, 26 minutes. In the quarterfinals, Medvedev will meet the sixth seed, Pablo Carreno Busta of Spain, who defeated German Dominik Koepfer 7-6 (7), 6-3.

Stefanos Tsitsipas of Greece couldn’t shake a leg injury, and the third seed was upset by Ugo Humbert of France 2-6, 7-6 (4), 6-2. Humbert will meet Russian Karen Khachanov, who eliminated Diego Schwartzman of Argentina 6-1, 2-6, 6-1.

The conditions didn’t seem to affect top seed Novak Djokovic, who cruised past Alejandro Davidovich Fokina of Spain 6-3, 6-1 as the Serb continues in the fourth leg of his quest for the Golden Slam — an Olympic gold medal and all four Grand Slam tournaments of the year. If he wins gold and the U.S. Open in September, he will join Steffi Graf of Germany (1988) as the only player to reach those heights.

Standing in his way in the quarterfinals is Kei Nishikori of Japan, the former world No. 4, who fought off Ilya Ivashka of Belarus in the first set but blew past him in the second with a 7-6 (7), 6-0 win.

Top-seeded Casper Ruud of Norway was pushed the limit by a lucky loser from qualifying before advancing to the quarterfinals in Kitzbuhel, Austria.

Ruud outlasted Spain’s Mario Vilella Martinez 7-5, 5-7, 6-4 in a match that lasted almost 2 1/2 hours. Ruud faced just two break points in the match, and he lost both, while he converted three of his seven break opportunities.

The last match of the night was another all-U.S. affair, with fourth-seeded Reilly Opelka edging qualifier Bjorn Fratangelo 7-6 (3), 7-6 (4).