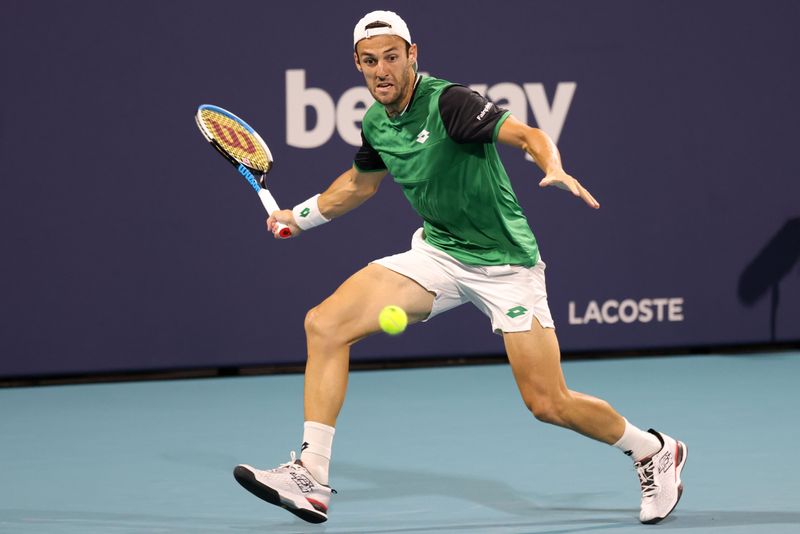 FILE PHOTO: Mar 24, 2021; Miami, Florida, USA; Stefano Travaglia of Italy hits a forehand against Frances Tiafoe of the United States (not pictured) in the first round of the Miami Open at Hard Rock Stadium. Mandatory Credit: Geoff Burke-USA TODAY Sports

Travaglia won 73 percent of his first-serve points and converted four of his seven break-point opportunities. Munar won just 58 percent on his first serve and went 2-for-7 on break-point chances.

The event’s top four seeds, No. 1 Albert Ramos-Vinolas of Spain, No. 2 Dusan Lajovic of Serbia, No. 3 Filip Krajinovic and No. 4 Richard Gasquet of France, received first-round byes.

Sixth-seed Benoit Paire of France was among the first-round winners in Gstaad, Switzerland, topping Slovakia’s Jozef Kovalik 6-3, 7-6 (2). Paire was a perfect 8-for-8 in saving break points.

Spain’s Feliciano Lopez, the No. 8 seed, held a 6-4, 4-6, 6-5 lead on Switzerland’s Marc-Andrea Huesler before Huesler retired.

Sixth-seeded Steve Johnson of the United States pulled away for a 7-6 (4), 6-2 win over Mexican wild-card entrant Gerardo Lopez Villasenor in the first round at Los Cabos, Mexico.

Johnson, who lost his serve just once, fired 15 aces to seven for Villasenor.