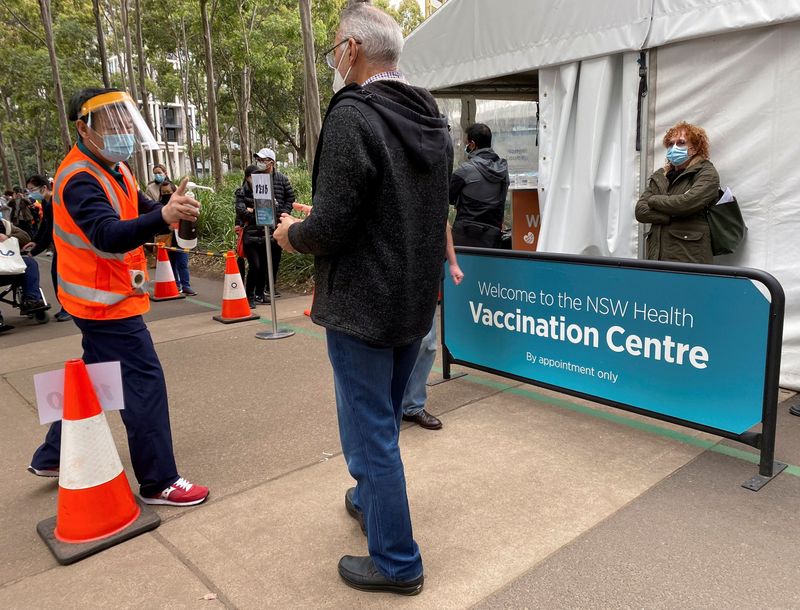 By Swati Pandey and Colin Packham

SYDNEY (Reuters) – Australia’s largest state of New South Wales on Friday urged the federal government to divert vaccine doses to Sydney, the epicentre of a flaring COVID-19 outbreak, raising objections from other states desperate for protection from the virus.

The Sydney outbreak has ballooned to nearly 1,800 cases since mid-June, and NSW Premier Gladys Berejiklian branded the situation a “national emergency”.”.

“We know that in some places around Australia there are very few cases or zero cases,” Berejiklian said in a televised news briefing on Friday.

“We need to get at least the first jab for as many people as we can in those affected communities as possible, and that’s why we are asking for a refocus of the national vaccination strategy.”

Only 15% of Australia’s adult population is fully vaccinated, partly due to health advice regarding rare cases of blood clots among some recipients of the AstraZeneca vaccine.

Berejiklian’s comments did not go down very well with other states who are unwilling to spare doses of the Pfizer vaccine.

“We need to be very careful when having a discussion about who we prioritise,” Victoria Premier Dan Andrews said.

Victoria, which is in a lockdown until next Tuesday, reported 14 cases on Friday, mostly in Melbourne.

South Australia is also in lockdown and its state Premier Steven Marshall said: “I’m not wanting to send any of our vaccination doses anywhere else.”

The issue was set to be discussed at a national cabinet meeting on Friday.

Prime Minister Scott Morrison has said he will go to the polls in the first half of next year, but his approval ratings fell to 51%, the lowest level in more than a year, according to a poll published this week.

“Whatever decision the government takes on vaccine allocations, it will be very difficult for Morrison to escape blame. The buck stops with him,” said Haydon Manning, a political science professor at Flinders University in South Australia.