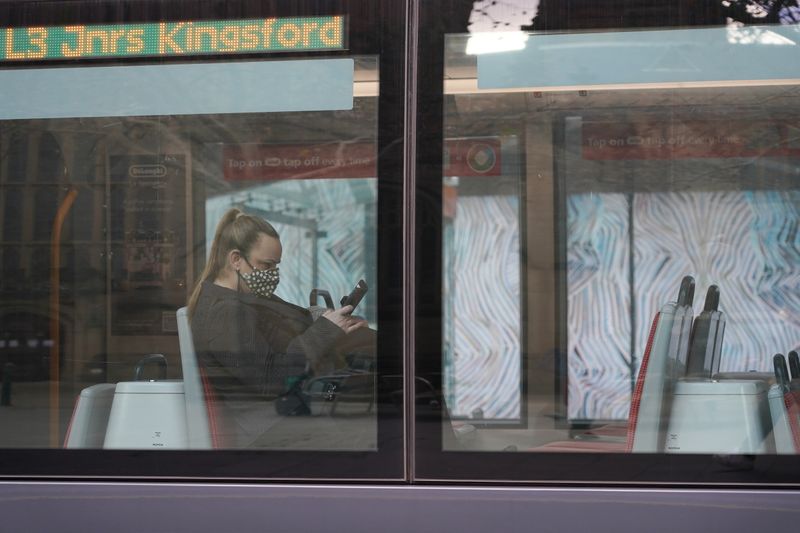 A public transport passenger wears a protective mask in the city centre on the first day of a two-week lockdown to curb the spread of a coronavirus disease (COVID-19) outbreak in Sydney, Australia, June 26, 2021. REUTERS/Loren Elliott

MELBOURNE (Reuters) – Sydney began a two-week lockdown on Sunday as a cluster of cases of the highly infectious coronavirus Delta variant rose to 110 in Australia’s largest city, while an outbreak in the northern city of Darwin prompted a hard two-day stay-at-home order.

“Given how contagious this strain of the virus is, we do anticipate that in the next few days, case numbers are likely to increase beyond what we have seen today,” News South Wales state Premier Gladys Berejiklian told a news briefing in Sydney.

Australia has been more successful in managing the pandemic than many other advanced economies through swift border closures, social distancing rules and high compliance, reporting just over 30,450 cases and 910 COVID-19 deaths.

But the country has confronted an increasing number of small outbreaks in recent months. These have been contained so far through speedy contact tracing, isolation of thousands of people at a time or snap hard lockdowns.

Thirty new infections reported by Sydney on Sunday took the number of Delta variant cases linked to a cluster in the Bondi neighbourhood to 110. Two other cases were under investigation.

The rapid increase in cases and exposure sites persuaded the state government to reluctantly impose a lockdown, under which people can only leave home for essential shopping, work, education, exercise and medical care.

Contact tracers were racing to get in touch with airline passengers after discovering that an attendant on several flights across the country had become infected in Sydney.

Northern Territory, home to some of Australia’s most famous ancient Aboriginal culture and a strong mining sector, which saw its first coronavirus case in months on Saturday, reported four locally acquired infections, unrelated to the Sydney outbreak.

The Delta variant infections started with a worker at a gold mine owned by Newmont Corp, now in lockdown.

As authorities have not been able to track down all close contacts of the miner, an immediate 48-hour hard lockdown on Darwin and some surroundings was imposed.

“I would rather regret us going too hard, too early than go too easy and risk it all,” Chief Minister Michael Gunner said at a news briefing.

Neighbouring Queensland reported on Sunday two locally acquired COVID-19 cases, with authorities saying both infections were of the Alpha variant, first detected in the United Kingdom in September of 2020.