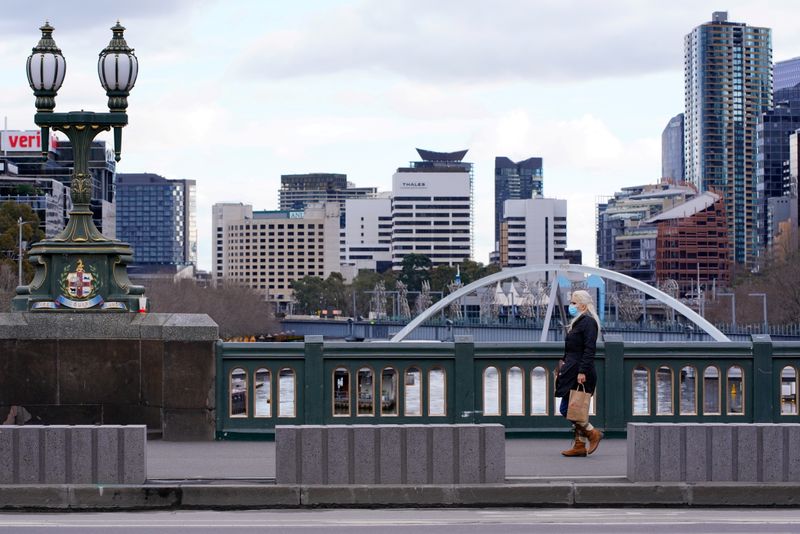 FILE PHOTO: A lone woman, wearing a protective face mask, walks across an unusually quiet city centre bridge on the first day of a lockdown as the state of Victoria looks to curb the spread of a coronavirus disease (COVID-19) outbreak in Melbourne, Australia, July 16, 2021. REUTERS/Sandra Sanders/File Photo

SYDNEY (Reuters) – Australia’s Victoria on Monday reported low numbers of new COVID-19 cases, raising hopes of an end to a lockdown in the state as planned, while neighbouring New South Wales looks set to extend its strict stay-home orders.

Australia is fighting to douse an outbreak of the highly infectious Delta virus variant since the first case was detected in Sydney more than a month ago in a limousine driver who transported overseas airline crews.

Since then, the virus has spread to other states forcing authorities to enforce lockdowns in Sydney, home to a fifth of Australia’s 25 million population, and all of Victoria and South Australia, where restrictions are due to end Tuesday night.

Sydney, the worst affected city and the state capital of New South Wales, is in a five-week lockdown until Friday but that looks set to be extended further as a growing number of cases are still being detected in the community before being diagnosed.

Officials are also worried about a major flare-up in infections in Sydney after thousands of people joined anti-lockdown protests over the weekend.

Australian media reported a crisis cabinet meeting of the New South Wales government will meet on Monday and that authorities could announce “a significant extension” of the lockdown given the high number of infectious people moving around in the community.

Officials were originally considering Sept. 3 as an end date to the lockdown but it could be enforced even until Sept 17, the Australian newspaper reported citing unidentified sources.

State Premier Gladys Berejiklian said the city’s residents would be given as much information as possible about the “important decisions” on the lockdown.

“I don’t know who came up with that date … obviously this week we will be communicating what life beyond July 31, and the next few weeks looks like,” Berejiklian told Seven News on Monday.

Eleven locally acquired cases of COVID-19 were detected in Victoria, the same number as the day before. All new cases are linked to the latest outbreak and all were in quarantine throughout their entire infectious period.

With about 32,900 cases and 918 deaths, Australia has kept its coronavirus numbers relatively low although a fast-moving Delta strain and low vaccination numbers among developed economies have worried residents.

Just over 16% of people aged over 16 years have been fully vaccinated so far.