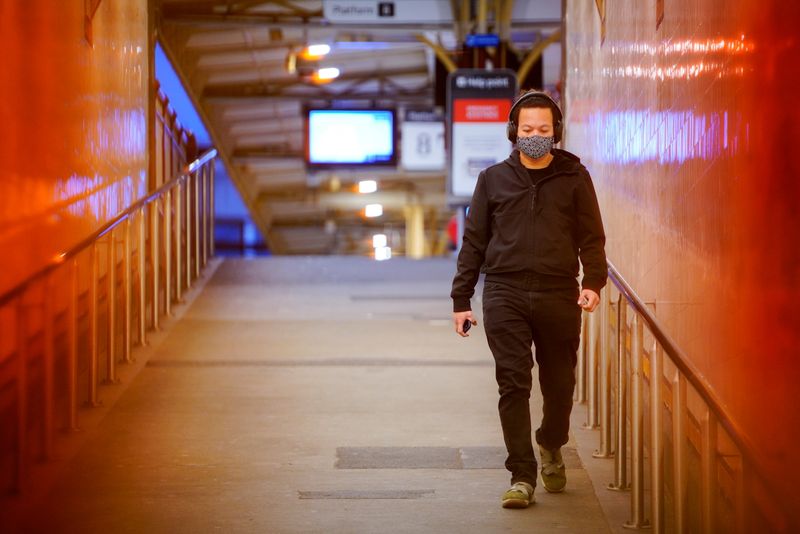 FILE PHOTO: A lone passenger wearing a protective face mask walks from a deserted train platform at Flinders Street during morning commute hours on the first day of a lockdown as the state of Victoria looks to curb the spread of a coronavirus disease (COVID-19) outbreak in Melbourne, Australia, July 16, 2021. REUTERS/Sandra Sanders/File Photo

SYDNEY (Reuters) – The Australian state of Victoria reported a slight dip in new COVID-19 infections on Sunday, raising hope a short lockdown would quash an outbreak of the highly transmissible Delta variant.

The state of 7 million people is midway through a five-day stay-at-home order after an outbreak began just over a week ago, joining the 5 million residents of Sydney city who are three weeks into a lockdown due to a fresh outbreak there.

Victoria’s health department said it had recorded 16 new cases overnight, down from 19 the previous day. All the new cases were linked to known chains of transmission, the department added without giving further detail.

Neighbouring New South Wales state, of which Sydney is the capital, meanwhile began its first day under tightened restrictions after authorities said three weeks of lockdown had failed to slow new cases.

The city said it was ordering all building sites to close and banning some 600,000 residents of its hard-hit western suburbs from leaving their immediate neighbourhood for work, in its toughest curbs on movement since the pandemic began.

Australia avoided the high infection and fatality numbers of many other countries in the initial stages of the pandemic due to an assertive response that included closing borders, stay-home orders and economic stimulus.

But a year and a half on, the federal government is under pressure due a sluggish vaccine rollout, blamed by some experts on changing regulatory advice for the AstraZeneca vaccine and limited supply of the Pfizer Inc drug.

Just over 10% of Australia’s 25 million people are fully vaccinated, according to government data, a fraction of the rates in the United States and Britain.