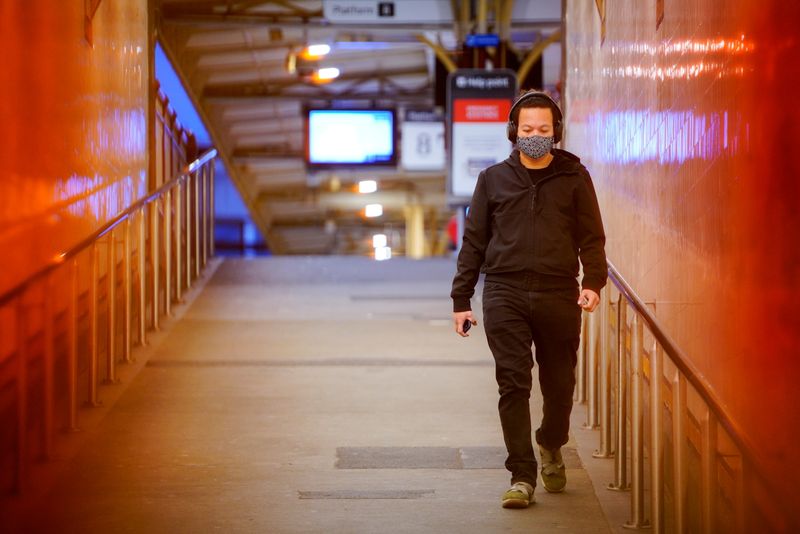 FILE PHOTO: A lone passenger wearing a protective face mask walks from a deserted train platform at Flinders Street during morning commute hours on the first day of a lockdown as the state of Victoria looks to curb the spread of a coronavirus disease (COVID-19) outbreak in Melbourne, Australia, July 16, 2021. REUTERS/Sandra Sanders/File Photo/File Photo

By Colin Packham and Renju Jose

CANBERRA/SYDNEY (Reuters) -Australia’s Victoria state said on Tuesday it will lift a strict lockdown after curtailing the spread of COVID-19, while neighbouring New South Wales faces an extension of restrictions after daily new cases spiked to a 16-month peak.

More than half of Australia’s near 26 million population has been in lockdown in recent weeks after an outbreak of the highly infectious Delta variant took hold in the New South Wales capital of Sydney and spread to three states.

New South Wales reported 172 COVID-19 cases in the past 24 hours, up from 145 a day earlier, with at least 60 spending time in the community while infectious.

New South Wales Premier Gladys Berejiklian said a decision whether to extend the five-week lockdown will be taken this week. But with less than 13% of the state’s population fully vaccinated, curbs are expected to remain.

“We know we’ve put in the hard yards for five weeks and we don’t want to waste all the good work that we’ve done by opening too early and then having the virus spread again,” Berejiklian told a media conference.

In contrast, Victoria state said most restrictions imposed on July 15 will be removed from Wednesday after recording just 10 infections of people already in quarantine.

“All in all, this is a good day,” Victoria state Premier Daniel Andrews told reporters in Melbourne.

Victoria’s 5 million residents will now be allowed to leave home freely and schools will reopen, though households will not be permitted to have visitors.

South Australia said it will also lift a lockdown on Wednesday after it recorded zero COVID-19 cases in the past 24 hours.

Lockdowns have raised the prospect of Australia recording its second recession in as many years, though Treasurer Josh Frydenberg said on Tuesday talk of this was premature.

Frydenberg said last week the country’s A$2 trillion ($1.5 trillion) economy is expected to shrink in the latest GDP figures, with lockdowns costing about A$300 million daily.

Swift contact tracing, tough social distancing rules and lockdowns have helped Australia to keep its COVID-19 numbers low, with just under 33,100 cases and 920 deaths since the pandemic first appeared in early 2020.

The outbreak in Sydney, however, has seen a wave of hospitalisations and 10 deaths in recent weeks.

New South Wales said 169 people are in hospital with the virus, of which 46 are in intensive care.

Amid heightened concerns about a spate of hospitalisations of younger people, Australia has urged people to take AstraZeneca’s COVID-19 vaccine after struggling to secure enough supplies of Pfizer’s inoculations.

Authorities had previously recommended only over 60s should take the AstraZeneca shot after rare but serious blood clotting cases.