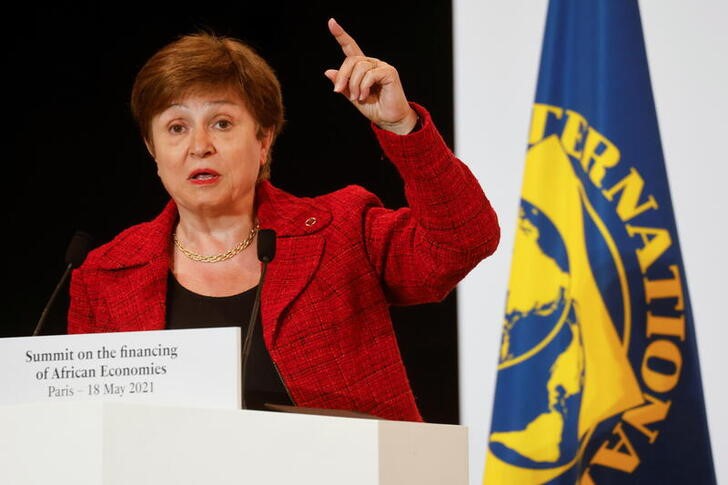 International Monetary Fund (IMF) Managing Director Kristalina Georgieva speaks during a joint news conference at the end of the Summit on the Financing of African Economies in Paris, France May 18, 2021. Ludovic Marin/Pool via REUTERS/Files

By Marc Jones and Andrea Shalal

LONDON/WASHINGTON (Reuters) – Plans for a new IMF “Resilience and Sustainability” fund that would expand its support to dozens more vulnerable countries gained key international backing on Thursday ahead of crucial meetings.

IMF chief Kristalina Georgieva this month proposed the new trust to allow rich countries to channel some of their new IMF reserves to poor and middle-income counterparts ravaged by COVID or climate change.

“This is something we certainly support” said Lars Jensen, a senior economist on the United Nations Development Programme (UNDP) and the author of a new report on how the IMF’s new funding should be directed.

The UNDP estimates the IMF’s Poverty Reduction and Growth Trust (PRGT), which is also expected to play a key role in a voluntary redistribution of new ‘Special Drawing Rights’ (SDRs) money, is only open to 55 of the world’s 82 most debt-vulnerable developing economies.

The COVID crisis is expected to leave 47 of the 82 vulnerable countries with gross debt already above levels deemed sustainable.

“As a possible development objective of an SDR channelling to vulnerable countries, it would be natural to target climate due to its global implications,” Jensen said, adding that the fund could even bulked up by leveraging it in borrowing markets.

G7 leaders have already signalled their backing https://www.reuters.com/world/us/g7-eyes-allocating-100-bln-imf-funds-covid-ravaged-nations-us-2021-06-11 to redistribute $100 billion of the new SDR money. Georgieva has said that China has expressed interest in participating and that she expected other major emerging economies to do the same.

The IMF’s executive board will meet on Friday on the next steps and finance officials from the Group of 20 major economies will discuss the SDR reallocation issue when they meet in Venice in July.

The U.S. Treasury is working closely with the IMF to explore options and design mechanisms for channelling SDRs to vulnerable countries, one U.S. Treasury official told Reuters on condition of anonymity because of the sensitivity of the matter.

“The IMF’s proposed Resilience and Sustainability Trust is one of the options under discussion,” the official said, without elaborating on other options.

Jensen said he hoped the new fund would also give debt-strained countries who have so far resisted restructuring their debt for fear of losing access to borrowing markets, a safety net to take that step.

Share of $650 bln SDR allocation in relation to reserves https://graphics.reuters.com/IMF-SDR/nmopaexdgpa/chart.png