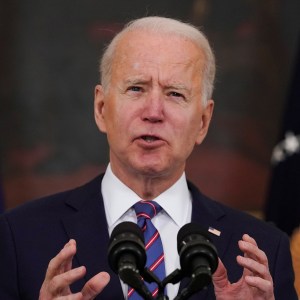 Okay, not really. But big news!

Confirmed: Today, President Biden is expected to announce today that states should make all American adults eligible for the COVID-19 vaccines by April 19, moving up his previous deadline of May 1. He will also say that the US has reached 150 million shots since he took office.

One of Joe Biden’s most transparent ruses is setting low expectations, and then confidently appropriating, and bragging, about hitting goals that have already been reached or have nothing to do with him. We all remember the president pledging to administer a million vaccine doses a day two days after 1.6 million doses had been administered. The above news, amplified in the usual uncritically partisan way by Yamiche Alcindor, is another good example. I’m all for speeding things up, but according to Kaiser Family Foundation, 36 states are already open to all adults –including places that Biden and Democrats like to grouse about, such as Florida and Texas. Another six states already plan on being open on the April 15.  The rest are opening up a few days later. So basically what is happening is what Donald Trump promised, and “health experts” said was unlikely.