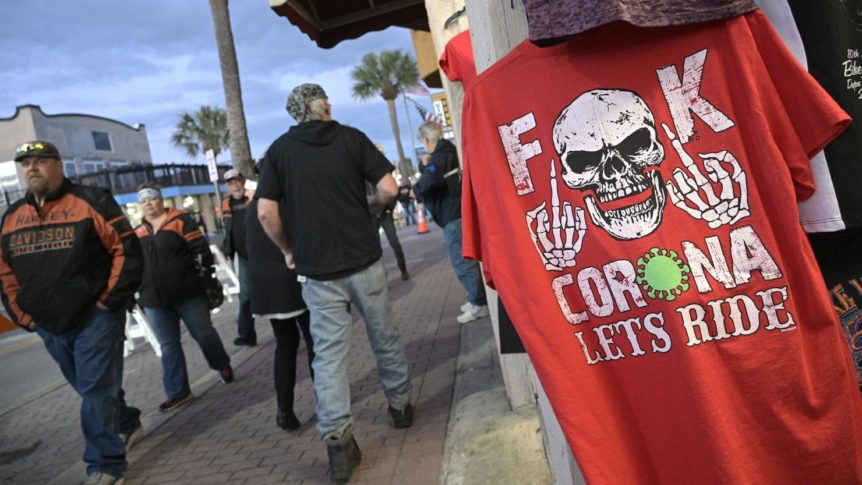 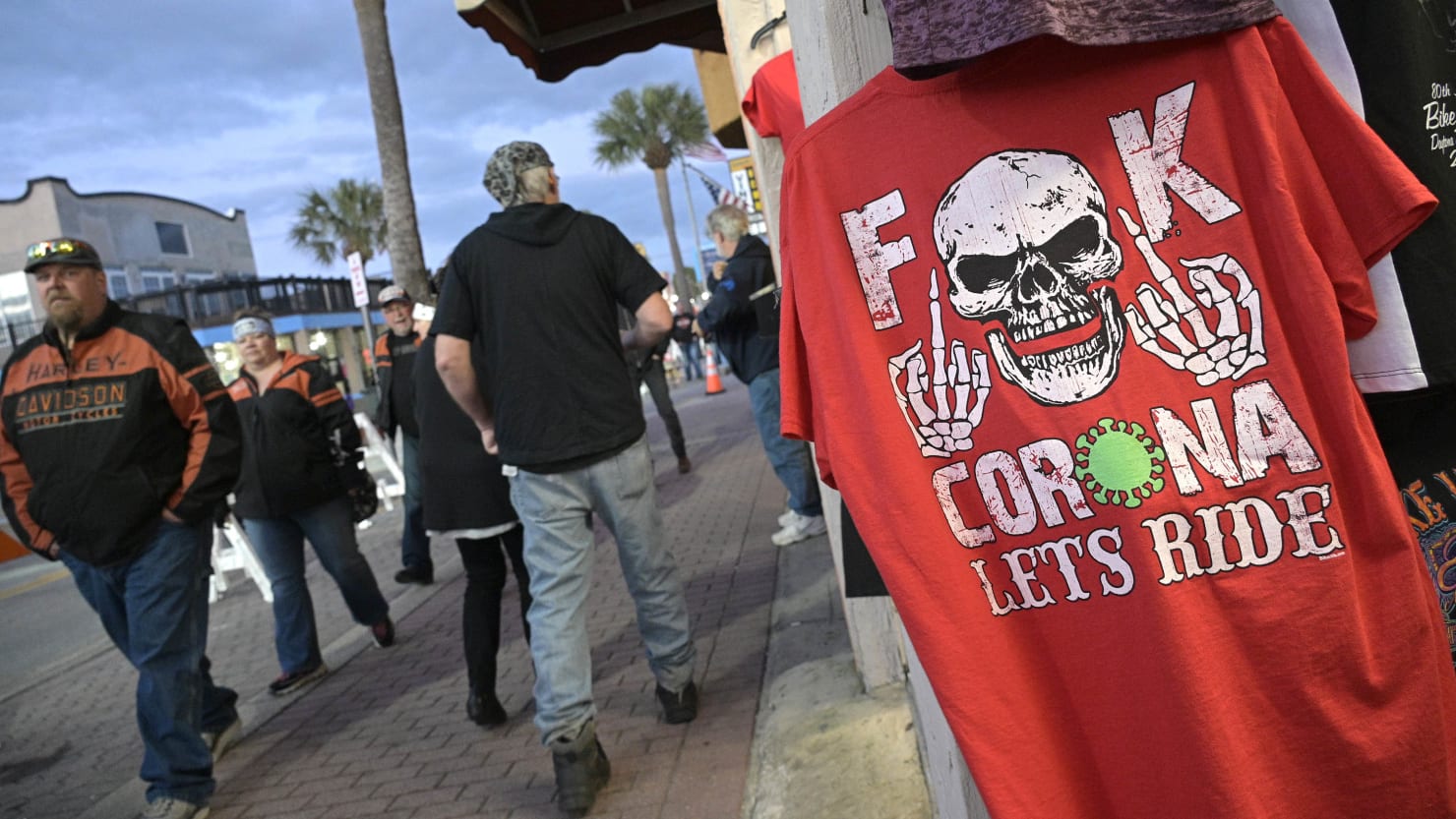 MIAMI—Over the weekend, Sean Doyle was in his backyard in Daytona Beach, Florida, when he spotted hundreds of motorcycles roaring across Seabreeze Bridge. The procession of two-wheeled iron machines signaled that the annual gathering of motorcyclists known as Daytona Beach Bike Week was in full swing. While Doyle has soaked in the biker festivities the last six years he’s lived in town, the 56-year-old New York City transplant is sitting out the 2021 edition.

“I love Bike Week, but I won’t go near it this year,” Doyle told The Daily Beast. “I just think it’s going to be a superspreader event, so I am staying away.”

On social media pages of local news outlets, dozens of Daytona Beach denizens like Doyle are expressing their own intentions to avoid the motorcycle parades, races, concerts, parties, and street festivals that come with the 10-day event that began last Thursday. As Florida experiences a chaotic and disjointed vaccine rollout, Bike Week could ignite a new wave of infections in the Fun Coast region of the state, residents and experts say. The threat is magnified by the fact that Florida leads the nation in new cases of the U.K. and other variants of the coronavirus.

Bike Week’s organizer, the Daytona Regional Chamber of Commerce, estimates 300,000 to 400,000 motorcyclists will be in the city until March 14, when the event ends, according to the Daytona Beach News Journal. In years past, the event attracted approximately 500,000 attendees. But even if officials have been determined to avoid it, some locals fear Bike Week could mirror what happened at the Sturgis Rally in South Dakota last August. That state’s health department reported 124 new cases among South Dakota residents who got sick after attending the rally and at least 290 people in 12 other states tested positive after being at the event, according to USA Today. (There was also a controversial study that suggested the Sturgis motorcycle gathering ultimately infected as many as 250,000 people nationwide.)

“[Bike Week] is still not worth the risk,” Doyle said. “I see a lot of people not taking [COVID-19] seriously. I am not yet eligible to get the vaccine, but as soon as I can get it, I will.”

Florida is one of the few states that has been largely open for business during most of the pandemic thanks to Gov. Ron DeSantis. He’s scoffed at enacting a statewide mask mandate, prohibited counties and municipalities from enforcing mask fines, allowed businesses to open at full capacity, and vowed to never again lock down the Sunshine State. But the prospect of a superspreader event unrivaled in the state’s already-ugly coronavirus history—just as the end of the pandemic was coming into sight with vaccines—is looming.

“The concern has largely been around Spring Break, but pretty much any large gathering of individuals could cause issues,” Dr. Jill Roberts, a University of South Florida epidemiology professor, told The Daily Beast. “The variant spreading in Florida is more contagious, and it is predicted to replace other strains as the dominant infection if given a chance to spread.”

While cases have trended downward in Florida, they are considerably higher than is desirable to interrupt community spread, Roberts said.

“Obviously, events such as Bike Week and Spring Break can cause this to happen,” she added.

Daytona Beach spokeswoman Susan Cerbone told The Daily Beast that the city has a mask requirement for indoor businesses when social distancing isn’t possible. But it can’t be enforced with fines due to DeSantis’ executive order. “The city has initiated motorcycle-only traffic patterns and limited curbside parking on Main Street during Bike Week,” Cerbone added. “This will create more room to allow social distancing.”

She added that businesses are restricted to 60 percent occupancy indoors for Bike Week. The governor’s office and the Health Department in Volusia County, where Daytona Beach is located, did not respond to requests for comment.

Janet Kersey, Chamber of Commerce executive vice-president and chief operations officer, said most businesses already put in place many safety precautions in the last year in addition to the parking and capacity restrictions for Bike Week. There is also a marketing campaign utilizing posters, billboard, and media ads to encourage attendees to wear their masks and sanitize frequently, Kersey told The Daily Beast via email.

“There was much discussion about not holding the event this year,” Kersey said. “With the benefits of the vaccine distribution ramping up, a reduction in numbers, and the real need for people to work to pay their bills, keep their homes, feed their families, and keep the economy from completely crashing from major losses in tourism, it was a highly engaged conversation with many considerations to move forward.”

Kersey added that Daytona Beach and the entire state have “worked tirelessly to protect” citizens and tourists throughout the past year by following specific industry and CDC safety guidelines.

Predictably, even with the city’s restrictions, reigning in nearly half-a-million bikers hellbent on partying is proving difficult.

On Bike Week’s official Facebook page, daily videos show platoons of motorcyclists rumbling through the city’s main thoroughfare, Main Street, as they are cheered on by mostly maskless pedestrians walking on the sidewalks. In a March 7 clip posted by a local musician, a couple of graybeard bikers stomp and holler alongside another trio of maskless revelers inside a busy local bar as a band plays an acoustic cover version of ACDC’s “TNT.” A video posted on Twitter and taken at another watering hole shows a rock band belting out Steppenwolf’s “Born to be Wild” in front of a jam-packed crowd.

Because of the unbridled atmosphere, Doyle said he won’t walk up and down Main Street to check out the motorcycle processions and the vendor booths. He is also not doing any grocery shopping until things settle down next week. “I usually shop early in the mornings,” Doyle said. “But during tourist events like this one, I don’t go to Publix,” he added, referring to the grocery chain ubiquitous in the state.

Doyle’s decision to stay indoors during Bike Week underscores what critics say has been an influence-driven trainwreck of a vaccine rollout under DeSantis. The governor’s strategy for getting shots into Floridians’ arms has been marred, among other things, by a no-bid deal with Publix to administer vaccines to people 65 and older after the chain donated $100,000 to his campaign. Also involved: developers with ties to major Republican donors, who were handpicked by the governor to set up pop-up vaccination sites in various communities in a pattern the state’s top Democratic official has said should be probed by the FBI.

As the federal government has accelerated Florida’s vaccine supply in recent weeks, DeSantis has been slow to expand the list of eligible people beyond senior citizens. Last week, the governor allowed firefighters, teachers, and police officers 55 and older, as well as people with high-risk medical conditions under 65, to get vaccines at any immunization site in the state. On Monday, DeSantis signed another executive order that will let anyone 60 and older get vaccinated beginning next week.

In the meantime, anxious residents who are not yet eligible are showing up at sites set up by the Federal Emergency Management Agency hoping to get leftover vaccination shots. Over the weekend, hundreds of people received immunizations at a FEMA site in Miami-Dade County’s Florida City that briefly deviated from DeSantis’ protocol because of low turnout from eligible residents. The site stopped inoculating anyone 18 and over after FEMA instructed staffers that they must adhere to the criteria established by DeSantis.

At another FEMA site in Miami’s Overtown neighborhood, local documentary producer Alfred Spellman got his first dose of the Moderna shot by sheer luck. On Sunday morning, he went to the site to inquire about the protocol for distributing leftover shots, Spellman, who is 42 and doesn’t have a pre-existing medical condition, told The Daily Beast.

“It was totally empty when I got there,” Spellman said. “When I asked [the staffer] what was the policy on leftover vaccines, he told me to wait a second and went inside. The guy comes back, and tells me to c’mon on in.”

He was informed that the site had thawed a pallet of Moderna vaccines that had to be used within six hours, Spellman said. “The staff there are anxious to vaccinate people,” he said. “I got lucky.”

Spellman, who said he caught COVID-19 in June, believes Florida’s reached the point where sites can have VIP lines for senior citizens and people with medical conditions and regular lines for anyone who wants to get vaccinated. But Roberts argued it’s still too early to deviate from the state’s strategy of focusing on Floridians with the highest risk of getting sick—even if the vaccine supply has “increased drastically” in the last few weeks, and even if DeSantis’ priorities are questionable. The governor has faced sharp criticisms from epidemiologists in his own state for failing to prioritize vaccinations for essential workers in the hospitality and retail industries, who are coming into contact with hundreds of people every day and are more likely to catch coronavirus and spread it.

“Attempts to acquire the vaccine ahead of eligibility should be discouraged, as there are a considerable number of high-risk individuals who have yet to be vaccinated due to many issues such as access to care, and unnecessary barriers,” Roberts said.

Doyle, the Daytona Beach local, said he doesn’t want to skip ahead of anyone. Once he gets vaccinated, both he and his 76-year-old partner, who’s had two shots already, will be able to start going out again and have gatherings with other inoculated friends without masks, per new guidelines recently released by the CDC, Doyle said.

In the meantime, he’s stuck inside, taking cover from a potential disaster.

“I am frustrated that I can’t get the vaccine,” Doyle said, adding, “Until then, I’ll do my best to stay away from everybody.” 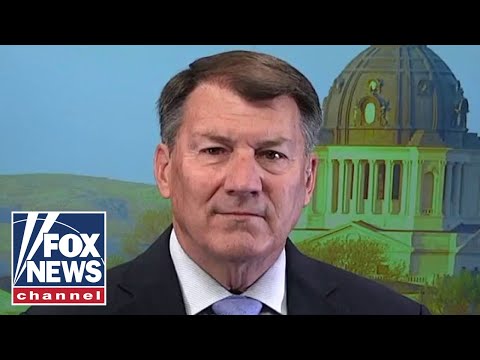 Sen. Mike Rounds on infrastructure package: 'There's a lot of work to do' 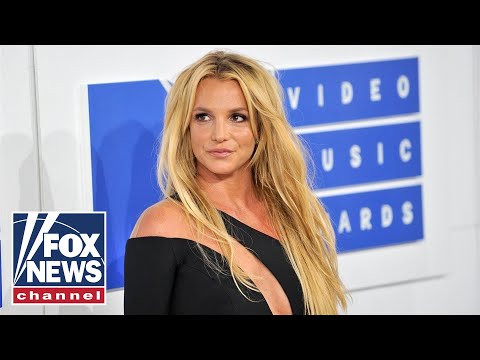 Britney Spears set to testify against her father’s conservatorship 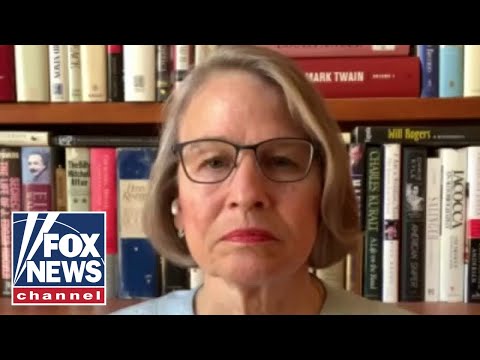 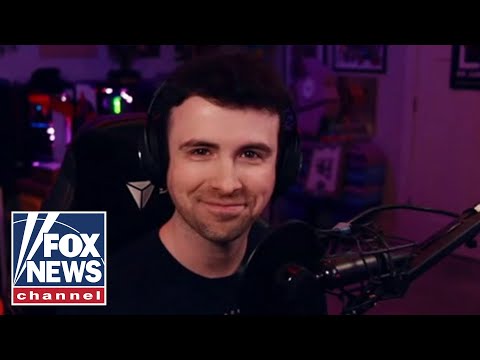 Twitch streamer teams up with his son to raise money for St. Jude 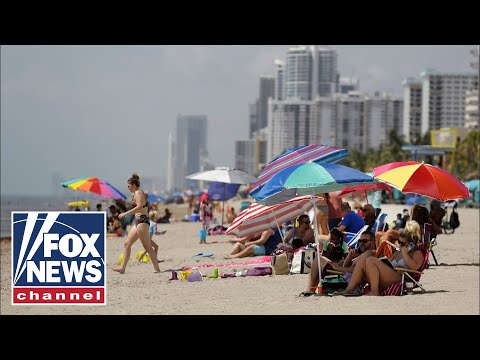 How did Florida succeed in the pandemic? Lt. Gov. Nunez explains

Pinion: Russia is laughing all the way to the bank | Saturday Agenda 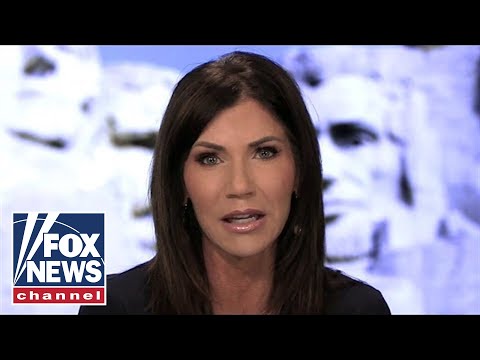 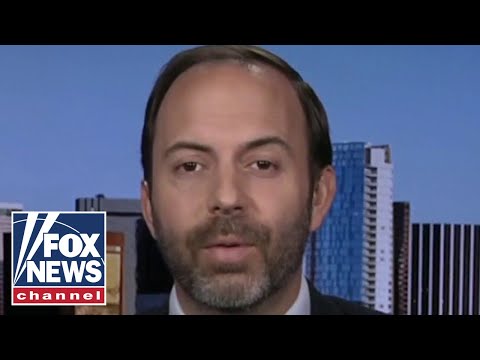 Rep. Lance Gooden on border crisis: 'We have been overrun by crossings' 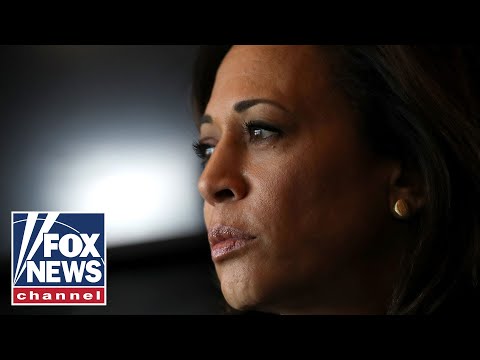