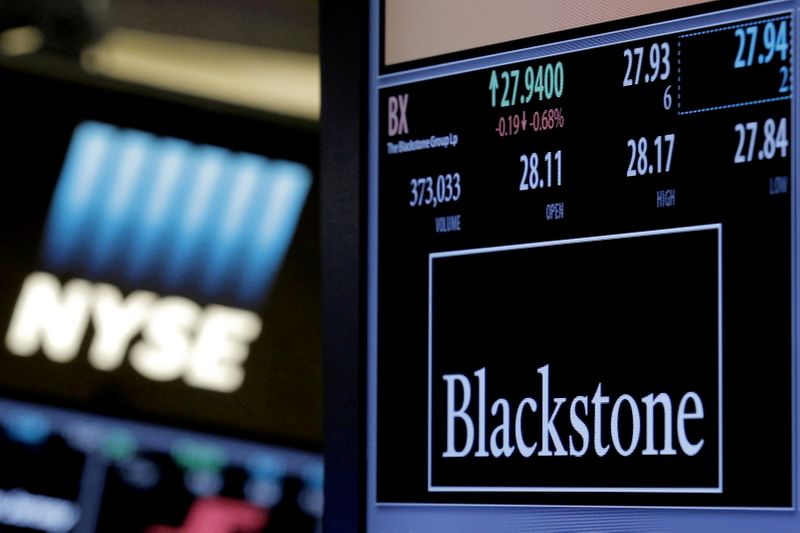 FILE PHOTO: The ticker and trading information for Blackstone Group is displayed at the post where it is traded on the floor of the New York Stock Exchange (NYSE) April 4, 2016. REUTERS/Brendan McDermid/File Photo

Distributable earnings, which represents the cash used to pay dividends to shareholders, rose to $1.1 billion from $548 million a year earlier.

This translated into a distributable earnings per share of 82 cents, surpassing the average Wall Street analyst estimate of 78 cents, data compiled by Refinitiv showed.

Frenetic dealmaking by private equity firms such as Blackstone was a major driver in accelerating global mergers and acquisitions (M&A) activity in the second quarter, as companies were emboldened by vaccinations and low interest rates that supported economic recovery.

Blackstone said its capital deployment reached a record $23.8 billion during the quarter. It also committed to investing an additional $28.5 billion in deals such as acquiring a majority stake in medical supplier Medline Industries Inc alongside Carlyle Group Inc and Hellman & Friedman.

Buoyant capital markets and rising company valuations allowed Blackstone to cash out a lot of its investments. Total asset sales reached $19.6 billion, including the $2.9 billion divestment of its portfolio of warehouse and logistics assets in Australia.

The buyout firm said its private equity portfolio grew 13.8% in the second quarter, compared with a 8.2% rise in the benchmark S&P 500 stock index over the same period. Opportunistic and core real estate funds rose 9.4% and 5.7%, respectively.

Its total assets under management rose to $684 billion from $648.8 billion in the prior quarter. Unspent capital fell to $129.9 billion from $148.2 billion three months earlier owing to the pace of capital deployments.

Blackstone declared a quarterly dividend of 70 cents per share.