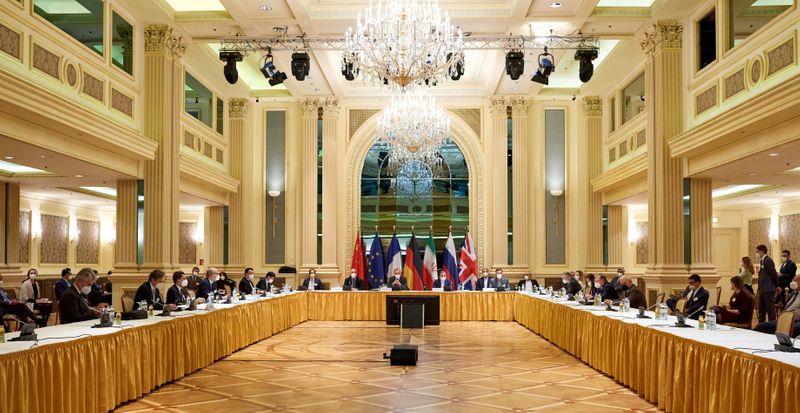 KUWAIT (Reuters) -U.S. Secretary of State Antony Blinken said on Thursday the negotiating process with Iran to revive a 2015 nuclear deal could not go on indefinitely, and that the ball is in Tehran’s court.

Indirect talks between Tehran and Washington to revive the nuclear pact, from which then-President Donald Trump withdrew the United States in 2018, adjourned on June 20, two days after the hardline cleric Ebrahim Raisi was elected president of the Islamic Republic. Raisi takes office on Aug. 5.

Parties involved in the negotiations, which also include China, Russia, France, Britain, Germany and the European Union, have yet to say when they might resume.

“We are committed to diplomacy, but this process cannot go on indefinitely,” said Blinken, addressing a news conference in Kuwait.

“At some point the gains achieved by the JCPOA (Joint Comprehensive Plan of Action) cannot be fully recovered by a return to the JCPOA if Iran continues the activities that it’s undertaken with regard to its nuclear program,” he said.

“We have clearly demonstrated our good faith and desire to return to mutual compliance with the nuclear agreement…The ball remains in Iran’s court and we will see if they’re prepared to make the decisions necessary to come back into compliance.”

Supreme leader Ayatollah Ali Khamenei, who has the last say on Iran’s state matters, declared on Wednesday that Tehran would not accept Washington’s “stubborn” demands in nuclear talks and again flatly rejected adding any other issues to the deal.

Gulf Arab states have asked to be included in the negotiations, and for any deal to address what they call Iran’s ballistic missile programme and destabilising behaviour in the region.

Blinken also said he had discussed during his visit to Kuwait, where he met with the ruling emir, the subject of relocating Afghan interpreters.

The United States uses several military bases in Kuwait, with which it has strong relations after leading a coalition that ended Iraq’s 1990-91 occupation of the Gulf state.