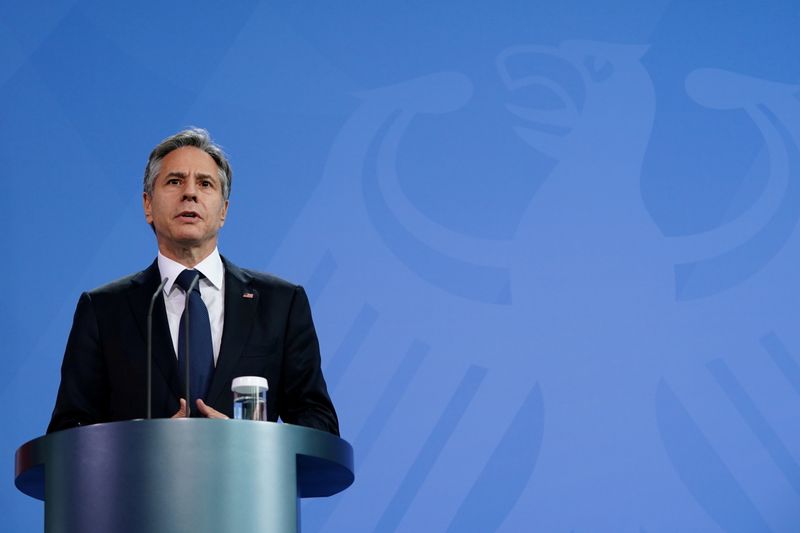 FILE PHOTO: U.S. Secretary of State Antony Blinken speaks during a joint news conference with German Chancellor Angela Merkel (not in the picture) at the Chancellery in Berlin, Germany June 23, 2021. Clemens Bilan/Pool via REUTERS

ROME (Reuters) -U.S. Secretary of State Antony Blinken said on Monday that 10,000 Islamic State fighters continue to be held in detention in camps run by the Kurdish-led Syrian Democratic Forces (SDF), and that this situation was “untenable.”

Speaking at the opening of a meeting in Rome to renew international efforts to combat the Islamist militia, Blinken said Washington continued to urge countries, including the 78 member countries of the coalition against Islamic State, to take back their citizens who had joined the group.

“This situation is simply untenable. It just can’t persist indefinitely. The United States continues to urge countries of origin, including coalition partners, to repatriate, rehabilitate, and where applicable, prosecute their citizens,” Blinken said in his opening remarks.

Blinken praised several Central Asian countries such as Kazakhstan and Uzbekistan and Balkan countries for repatriating some of their citizens, however senior State Department officials in a call later on Monday said during the conference no new countries had made any commitments to take back their nationals.

Originally an offshoot of al Qaeda, Islamic State seized large swathes of Iraq and Syria from 2014, imposing a reign of terror with public beheadings and attacks by supporters abroad.

Islamic State was declared militarily defeated in 2017 but has since waged a steady insurgency across parts of northern Iraq and a porous border with neighbouring Syria.

Militant groups linked to al Qaeda and Islamic State have also grown stronger in recent years, despite the deployment of thousands of regional, Western and U.N. troops across West Africa’s Sahel region.

Blinken on Monday also announced additional $436 million in humanitarian assistance for Syrians, both inside the country and in the “surrounding countries and generous communities” that host them. The State Department did not name which countries but U.S. officials said this was fresh funding.

“ This funding  will  support the provision of food, clean water, shelter, health care,  nutrition,  protection, and education, among other  forms of relief,” Blinken said.