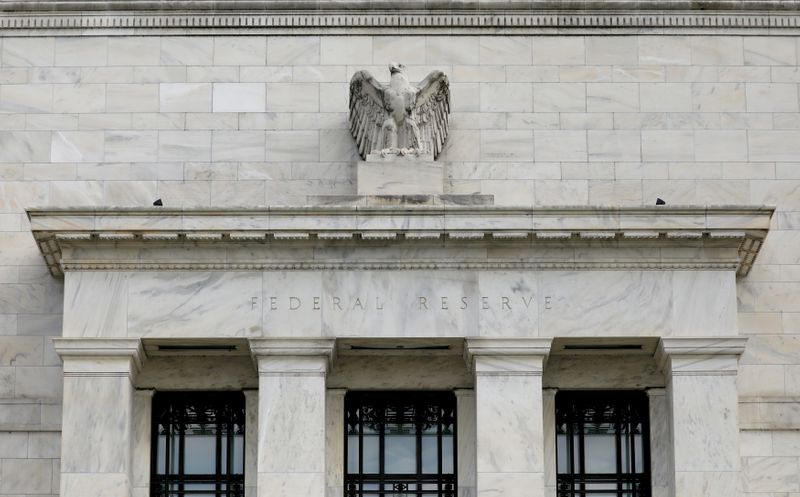 WASHINGTON (Reuters) – The Federal Reserve will conclude its latest policy meeting on Wednesday weighing the risks of a COVID-19 resurgence in the United States and a potentially slower economic recovery against a developing inflation threat that had been its main focus.

Fed officials are expected to continue their debate over when to wean the economy from the measures put in place more than a year ago to fight the pandemic’s economic aftershock, and in particular to discuss when to reduce the $120 billion in Treasury bonds and mortgage-backed securities the U.S. central bank is buying each month to hold down long-term interest rates.

But that discussion, begun in earnest just six weeks ago when U.S. cases of COVID-19 were falling under the influence of vaccinations, has been complicated by the rapid spread of the more infectious Delta variant of the virus, the renewal of crisis conditions in some hospitals, and reinstated mask mandates in some cities.

Though focused mostly on the 40% of the adult U.S. population that remains unvaccinated, the current outbreak nevertheless raises fresh tensions for the Fed over whether planning to fend off inflation should be the top concern at a time when the health crisis may yet curb an otherwise ebullient recovery.

“Sadly, (Fed Chair Jerome) Powell will have to acknowledge the downside risks that are beginning to emerge,” Diane Swonk, chief economist at Grant Thornton, wrote ahead of the Fed’s two-day policy meeting this week. “The question mark is how spread of the Delta variant affects the return to work and whether it dampens some of the demand for services” that had begun to lead the recovery and pull millions of sidelined people back into jobs.

The economy still is 6.8 million jobs short of where it was before the pandemic’s onset in early 2020, and Powell has said the country remains “a ways off” from the progress he wants to see before changing any of the Fed’s efforts at encouraging job growth. Powell will hold a news conference following the 2 p.m. EDT (1800 GMT) release of the Fed’s latest policy statement.

The Fed remains in full crisis-fighting mode more than 16 months into a national state of emergency, continuing to hold its benchmark overnight interest rate near zero and buying bonds at a pace some policymakers have begun to question openly as too aggressive. Inflation is taking off, they note, and housing prices have hit record highs thanks in part to the relatively low interest rates on home mortgages.

To avoid bigger problems down the road the Fed should pull back “sooner rather than later,” Dallas Fed President Robert Kaplan said after the June 15-16 policy meeting. St. Louis Fed President James Bullard has voiced similar sentiments – only to see Missouri’s second-biggest city reimpose an indoor mask mandate amid a rapid coronavirus outbreak in the state.

Nationally, daily infections have risen about fourfold since the Fed met in June, making what had seemed a straightforward process – a turn from fighting recession to managing the rising prices and other risks of a strong recovery – into a more nuanced debate over how to continue planning for the pandemic’s end while also acknowledging its persistence.

A new Reuters poll showed 160 of 202 economists, or about 80%, said the spread of new coronavirus variants was the biggest risk to the recovery.

The latest surge in cases has not shown up clearly yet in the economic data. Consumer confidence remains high and people are still boarding planes and heading to restaurants.

Still, Bank of America analysts recently drew a cautionary tale from Michigan, where a wave of infections in February appeared to dent hiring and consumer spending.

“So far we have seen little evidence of the Delta variant significantly affecting economic activity or spending on services,” those analysts wrote. But “we have good reason to be concerned about the current outbreak and what it means.”

Amid those risks, there’s also no guarantee that inflation will fade on a timetable within the Fed’s comfort zone – possibly leaving the central caught between slower growth and rising prices, the worst of both worlds.

A new Fed framework ostensibly allows inflation to run above the central bank’s formal 2% target to give the economy more room to generate jobs.

That approach, however, was designed after a decade of low inflation, and on an expectation the chief challenge would be raising the weak pace of price increases. Yet as of May, with the world economy beset by supply-chain problems and other challenges tied to the economic reopening, the Fed’s preferred inflation measure was nearly twice the target rate.

If that trend continues “they would have to say at some point ‘we do have to remove accommodation’ … and they could not wait for maximum employment” before raising interest rates, as their current policy pledges to do, said Bill English, a Yale School of Management professor and former head of the Fed’s monetary affairs division.

For that reason alone, Fed planning over how to reduce its bond-buying program is expected to continue. The central bank wants the monthly purchases to end before considering an interest rate increase, and the process of tapering them could take perhaps a year to complete – a lengthy runway if inflation persists and rate increases become more urgent.

So far, officials are not foreclosing any option. Market analysts say they expect the Fed to clarify its plans for ending the bond-buying in the fall, and perhaps begin reducing purchases early next year.

That presumes U.S. hiring continues, and that travel, dining out, and other close-contact social activities also recover.

In an update to its World Economic Outlook, the International Monetary Fund on Tuesday raised its forecast for U.S. growth in 2021 to a torrid 7%. But in a related blog, Gita Gopinath, the IMF’s chief economist, cautioned central banks not to be distracted into “prematurely tightening policies” by a rise in inflation that was expected to fade on its own.

“The recovery is not assured until the pandemic is beaten back globally,” she wrote.