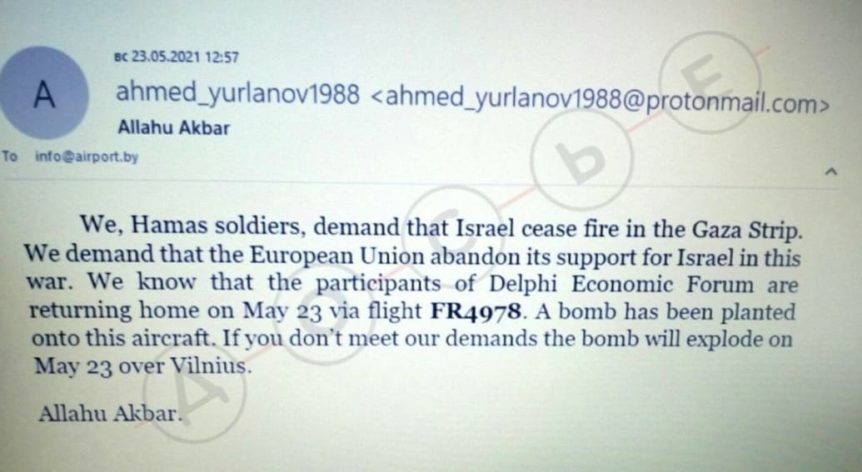 The Daily Beast, in collaboration with the Dossier Center, has exclusively obtained the original bomb threat email Alexander Lukashenko now claims was sent by the Palestinian militant group Hamas, allegedly prompting his order to land a Ryanair jet carrying a dissident journalist in Minsk.

But timestamps show that the email was sent 24 minutes after Belarusian authorities told the pilot and crew that they were transporting an explosive device as well as passengers.

“Allahu Akbar” runs the subject line of the email, the sender of which was ahmed_yurlanov1988@protonmail.com. “We, Hamas soldiers,” the email continues, “demand that Israel cease fire in the Gaza Strip. We demand that the European Union abandon its support for Israel in this war. We know that the participants of [sic] Delphi Economic Forum are returning home on May 23 via flight FR4978. A bomb has been planted onto this aircraft. If you don’t meet our demands the bomb will explode on May 23 over Vilnius.”

Adding to the fact that the message was sent after the mid-air bomb theatrics unfolded, the sought-for cease fire referenced in the email had already taken effect on Friday, two days before this communique was sent out.

The bomb threat, Lukashenko insists, forced the Ryanair plane carrying one of Belarus’s most prominent opposition journalists to divert to Minsk Sunday at the added insistence of a MiG-29 fighter jet, which “escorted” the aircraft to an impromptu landing. Conveniently, it also gave Belarusian authorities a chance to snatch a reporter accused of galvanizing anti-government protests last year.

Roman Protasevich, the former editor-in-chief of the Telegram channel Nexta, is now in the custody of the KGB, as Belarus’s post-Soviet security service is still called, as is his Russian girlfriend Sofia Sepega. Both have “confessed” on camera to a slate of anti-government offenses in what were obviously coerced performances redolent of Stalinist show trials.

No one seriously buys the bomb threat claim, much less its attribution to Hamas, whose spokesman Fawzi Barhoum categorically rejected the group’s involvement in a 21st century plane hijacking—one that was more likely orchestrated by a government intent on quashing opposition from its own civilian citizens.

Having initially downplayed the episode on social media, both the European Union and Ryanair have now taken to calling this brazen intelligence operation a “hijacking” and “state-sponsored piracy.” President Joe Biden called the incident an “outrageous” and “shameful” assault on the free press. All EU-based air carriers have since halted flying through Belarusian airspace and banned Belarus’s state-owned Belavia air fleet from traveling to EU countries.

On Monday, the bloc agreed to impose sanctions on Lukashenko’s regime, as reports continue to come in about arrests and suspect disappearances of other independent Belarusian journalists, particularly those who, like Protasevich, covered last August’s stolen presidential election and resulting protest movement. Lukashenko has spent close to a year consolidating his 27 year-reign, while casting his opponents as “terrorists” themselves and forcing them into exile or prison.

Protasevich, who has been detained on terrorism and espionage charges, could face the death penalty in Belarus.

The original email Lukashenko is hanging his nutty conspiracy theory on is riddled with other inconsistencies that clash with the established timeline of events that led to the plane’s forced landing.

The email was sent to Minsk’s National Airport’s general information account at 12:57 p.m. on May 23, 27 minutes after the plane first entered Belarusian airspace and 24 minutes after air traffic control in Minsk first informed the Ryanair pilot that an emailed bomb threat was “shared with several airports.”

But the Greek Civil Aviation Authority, which is responsible for the plane that took off from Athens, has publicly stated that it received no such warning at any point during FR4978’s journey. Lithuania did receive the email, but not Vilnius Airport, the intended destination; rather, the recipient was State Enterprise Lithuanian Airports, the state-run company that handles three different Lithuanian airports (Vilnius, Kaunas, and Palanga).

So while Lukashenko’s KGB pulled off an impressive coup in snaring a political prisoner via air privacy, its excuse leaves much to be desired. Leaving aside the fact that Hamas isn’t for blowing up commercial airliners, the identity it chose for a Hamas representative was bizarre. Ahmed Yurlanov?

The genesis of the name Yurlanov, as it happens, is Russian, Bulgarian, Azeri and—Jewish.

This investigation was done in collaboration with Dossier Center and Newslines.