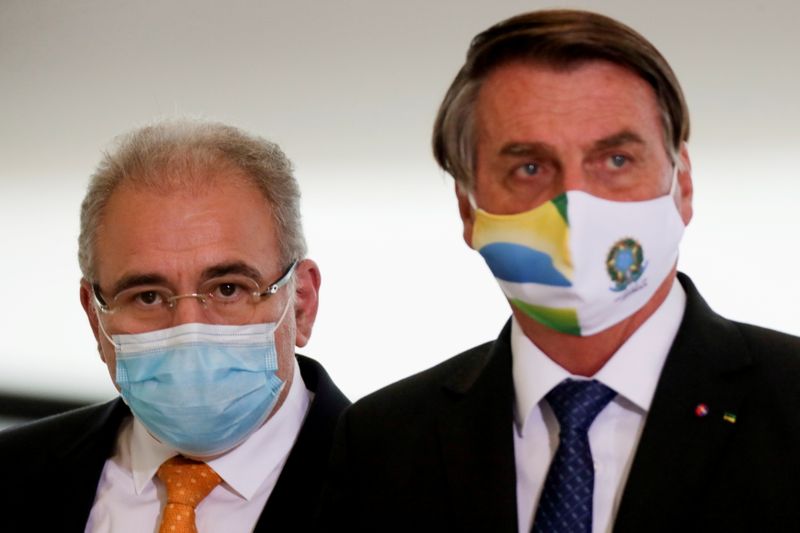 FILE PHOTO: Brazil’s Health Minister Marcelo Queiroga and Brazil’s President Jair Bolsonaro arrive for a ceremony of release of resources for Primary Health Care in combat of the coronavirus disease (COVID-19), at the Planalto Palace in Brasilia, Brazil May 11, 2021. REUTERS/Ueslei Marcelino/File Photo

By Pedro Fonseca and Gabriel Stargardter

RIO DE JANEIRO (Reuters) – Brazil will suspend a $324 million Indian vaccine contract that has mired President Jair Bolsonaro in accusations of irregularities, the health minister said on Tuesday, following the guidance of the federal comptroller, the CGU.

The deal to buy 20 million doses of Bharat Biotech’s Covaxin shot has become a headache for Bolsonaro after whistleblowers went public with concerns over irregularities. One Health Ministry official said he personally alerted the president about his concerns.

Brazil’s Health Minister Marcelo Queiroga said at a news conference his team would probe the allegations while the suspension was ongoing.

“According to the preliminary analysis of the CGU, there are no irregularities in the contract but, for compliance, the Health Ministry chose to suspend the contract for a more in-depth analysis,” the ministry said in a statement.

Earlier on Thursday, Reuters reported a CNN Brasil report that the ministry had decided to cancel the contract.

Brazilian federal prosecutors have opened an investigation into the deal, citing comparatively high prices, quick talks and pending regulatory approvals as red flags for the contract signed in February. The contract is also being probed by a Senate panel investigating the government’s handling of the pandemic.