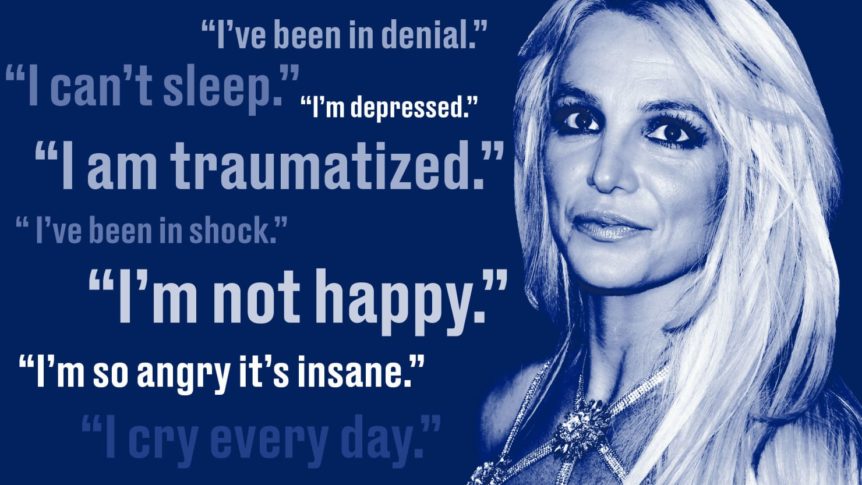 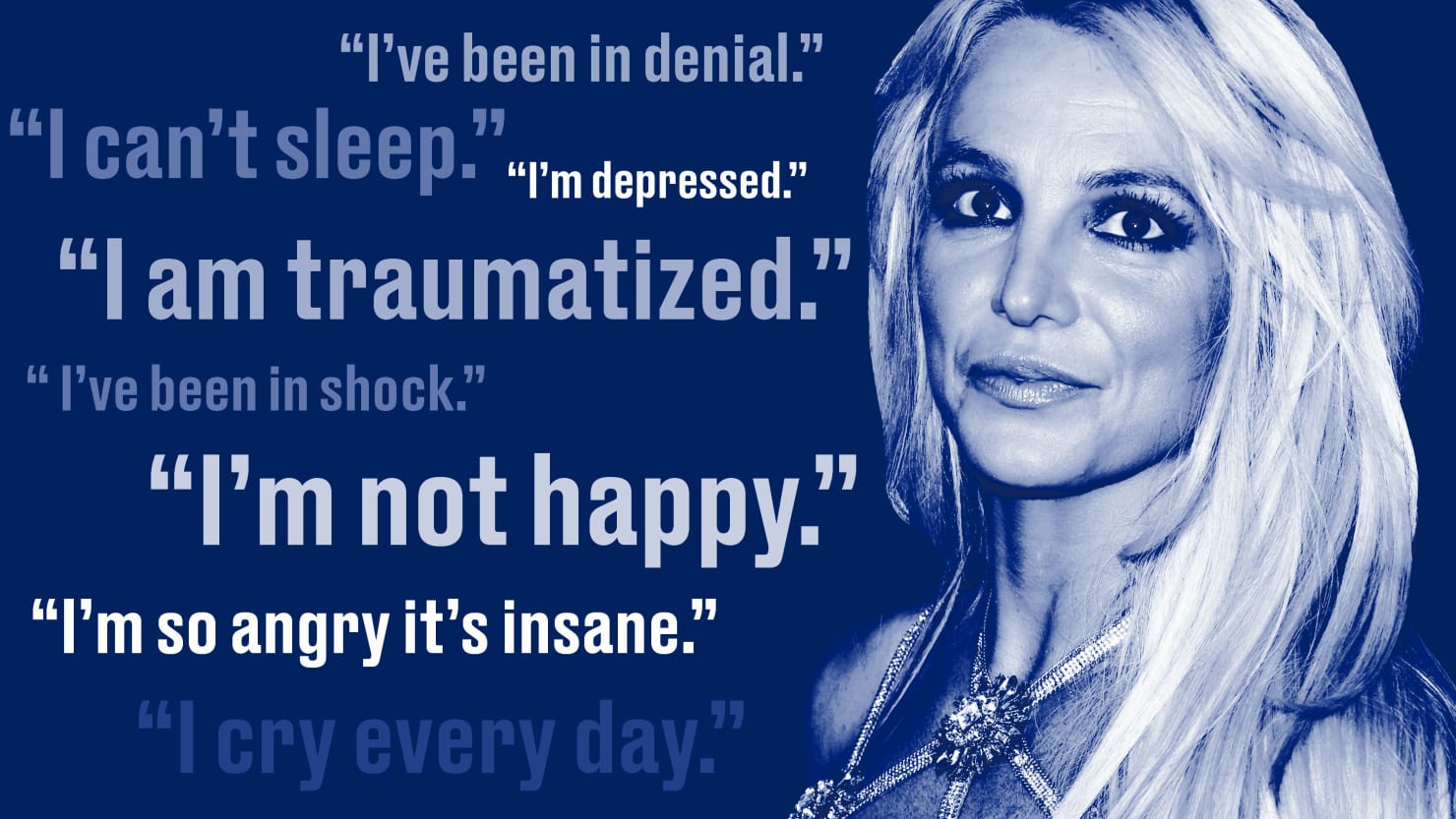 Britney Spears’ conservatorship testimony was equal parts shattering and powerful. For 23 heart-rending minutes on Wednesday afternoon, the singer spoke with a vulnerability we rarely see from celebrities—the kind into which no human being should ever be forced.

Spears has lived under a conservatorship that controls her personal life and finances for 13 years, and until this week had not commented publicly on the matter. A transcript of her testimony is available in full, and audio has also leaked online—and the abuses she described are unfathomable.

The singer said she’d been denied privacy, even while changing clothes. She recalled being forced to take lithium instead of the drugs she’d taken for five years as “punishment” for cancelling her Las Vegas Domination residency; she said she’s endured years of “therapy” with practitioners she never chose. She wants to have a baby, she said, but can’t because her conservators won’t allow a doctor to remove her IUD. (Alexis McGill Johnson, president and chief executive of the Planned Parenthood Federation of America, pointed out on Twitter that this constitutes reproductive coercion.)

For more than a decade, Spears earned millions of dollars for other people despite being legally classified as a person unfit to make her own life decisions. Throughout all of this, Spears said, Samuel Ingham III—the attorney for whom she’s been forced to pay $10,000 every week—never advised her that she could contest the conservatorship. Ingham seemed “stunned” by the singer’s testimony, the New York Times reports, and said he would step down if asked.

“I’ve lied and told the whole world ‘I’m OK and I’m happy,’” Spears said. “… I thought just maybe, if I said that enough, maybe I might become happy, because I’ve been in denial. I’ve been in shock. I am traumatized. You know, fake it till you make it. But now I’m telling you the truth, OK? I’m not happy. I can’t sleep. I’m so angry it’s insane. And I’m depressed. I cry every day.” (Vivian Lee Thoreen, a lawyer for Spears’ father and co-conservator James Spears, read out his statement during Wednesday’s hearing: “He is sorry to see his daughter suffering and in so much pain. Mr. Spears loves his daughter, and he misses her very much.”)

In spite of all this, near the end of her address Spears cracked a joke and let out a laugh. After making clear that she wanted to end her conservatorship without yet another psychological evaluation and saying she doesn’t believe in therapy, Spears admitted she still wants to meet with a therapist of her choosing on her terms. “Because,” she said with that familiar infectious giggle, “I actually know I do need a little therapy.”

If anyone needed to be reminded how she’s inspired fans for so long, you can hear the reason in her laughter; it’s the sound of an indomitable spirit.

As horrifying as the experiences Spears described are, the fact that she had to share them in a public forum to secure basic human dignity is equally devastating. Guardianships are an ongoing civil rights issue for disabled and elderly communities, and this case should spark a broader, lasting conversation. Still, another piece of Spears’ personal life has now become part of the public narrative. And if there’s one thing her fans know, it’s that she’s already given the public more than she ever imagined, and certainly more than we ever deserved.

Spears grew up on the talent circuit even before she joined the Mickey Mouse Club, but becoming a pop star forced her into an impossible bind that only befalls famous young women. Almost immediately, news anchors and nervous suburban mothers began wringing their hands over whether or not Spears, wearer of Catholic school girl uniforms and crop tops, was an appropriate “female role model.” Her roots in Kentwood, Louisiana, once a convenient rags-to-riches origin story, became a liability as the media smeared her as “white trash.”

Whatever a “female role model” was supposed to be, Spears was unworthy—and that misogynistic, classist narrative sold countless tabloids and mined millions of clicks from a voracious public. Her unworthiness became an excuse for evisceration.

Marilyn Monroe knew that narrative, and so does Mischa Barton. So do Lindsay Lohan, Paris Hilton, Miley Cyrus, and countless others.

When her mental health began to deteriorate under relentless scrutiny and cruelty, Spears’ father, whose struggle with alcoholism and erratic presence in his daughter’s life is well documented, received control of both her finances and person. The singer told the court that she hadn’t wanted to share any of her struggles with the public because she assumed people would laugh at her or claim she was lying. She imagined their rebukes aloud: She’s got everything, she’s Britney Spears.

When the fan-led movement to #FreeBritney first began, it received the same dismissive derision that befell fan Chris Crocker when he called for everyone to “Leave Britney Alone!” in a viral video. (Although a good bit of the ridicule Crocker endured was also rooted in homophobia.) For years, discussion of Spears’ conservatorship was relegated to the gossip and podcast space; Britney’s Gram podcasters Tess Barker and Barbara “Babs” Gray, were on the case early and uncovered some of the most disturbing allegations from a shadowy “Deep Throat” source. Over the years, multiple fan protests and New York Times reports—not to mention the instantly viral Times documentary Framing Britney Spears—finally brought the issue the attention it deserved.

“If anyone needed to be reminded how she’s inspired fans for so long, you can hear the reason in her laughter; it’s the sound of an indomitable spirit.”

During her testimony, Spears said she wanted to make her story heard. When she’s ready, it seems likely she’ll share more—but regardless of what comes next, it’s worth a moment of self examination.

It’s easy to scold, say, Justin Timberlake for tweeting his support for Spears like he didn’t help destroy her public image for his own gain—and for waiting almost two decades to apologize. But it wasn’t Timberlake who kept Spears from coming forward for so many years; it was all of us, the people who looked the other way for so long that Spears couldn’t trust us to believe her. One of the biggest pop stars in the world has been deprived of her bodily and financial autonomy for more than a decade, and we’ve spent years pretending it was normal. We were all complicit in Spears’ exploitation, and most of us have done even less than Timberlake to make amends.

In a recent column about the bullying revelations that have emerged against Chrissy Teigen, MSNBC columnist Liz Plank shared an insight she learned from her sister, who works as an emotional intelligence teacher for elementary school children: “When we watch someone get bullied, all of us play an active role. And therefore we’re all a part of the problem.”

The points Plank makes about the treatment Courtney Stodden received apply to Spears with astounding precision. TV personality Dr. Drew Pinksy inspected Stodden’s breasts on television when they were 16 years old; a Dutch journalist did the same to Spears when she was 17. As Plank points out, the public watched as the media, including feminist blogs, swarmed around Stodden—and the tabloid cottage industry that exploded around Spears speaks for itself.

“[T]he truth is that we were all complicit in the harassment and retraumatization of a teenager,” Plank wrote, “who was already in the grip of what they now call an abusive relationship.” One need only swap out “abusive relationship” for “poorly understood mental illness” and the same goes for Britney.

Spears has never received the kindness she deserved—not from the media, not from the courts, and not from most of the celebrity news-reading world. In testifying Wednesday, she faced every one of her bullies down and did so with the kind of poise most of us only dream of. She never owed us such bravery—she never owed us anything. Nothing anyone can do will ever restore what’s been taken away. But let this be a reminder that if there was ever a “good female role model,” it’s Britney, bitch.