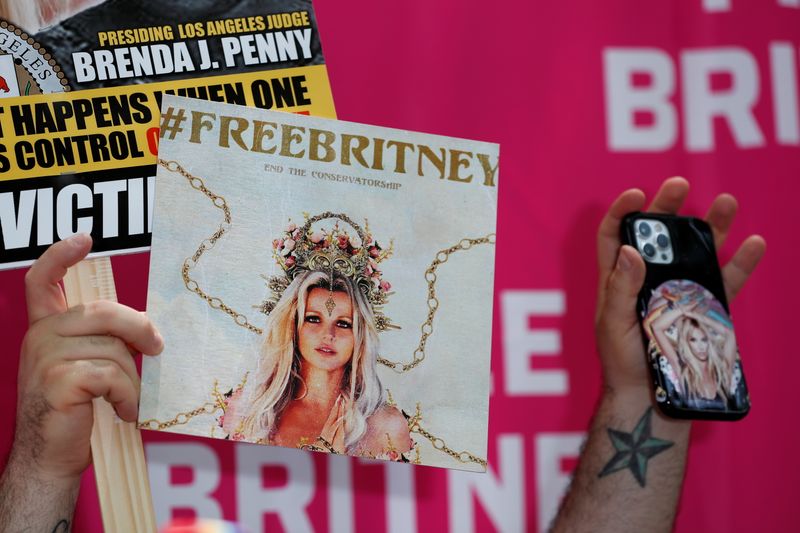 FILE PHOTO: A phone and placards are held during a protest in support of pop star Britney Spears on the day of a conservatorship case hearing at Stanley Mosk Courthouse in Los Angeles, California, U.S., July 14, 2021. REUTERS/Mario Anzuoni/File Photo

LOS ANGELES (Reuters) – An attorney for Britney Spears asked a Los Angeles court to name a new conservator to oversee the pop singer’s finances following recent testimony that she wanted her father ousted from the role, the New York Times reported on Monday.

In a court filing, lawyer Matthew Rosengart requested that accountant Jason Rubin be named the conservator of Spears’ estate, a post currently held by her father, Jamie Spears, the Times reported.

The newspaper said that Rosengart also filed a petition to remove Jamie Spears as a conservator but that document was not made public.

Britney Spears recently told the court she wanted her father immediately removed and wanted to charge him with conservatorship abuse.

The 39-year-old was placed under a conservatorship that controls both her personal and financial affairs in 2008 after she suffered a mental health breakdown. The details of her mental health issues have never been revealed.

Public support for the singer has swelled since her emotional address to the court in June in which she called the conservatorship abusive and humiliating.

Representatives for Rosengart and Jamie Spears did not immediately respond to requests for comment.