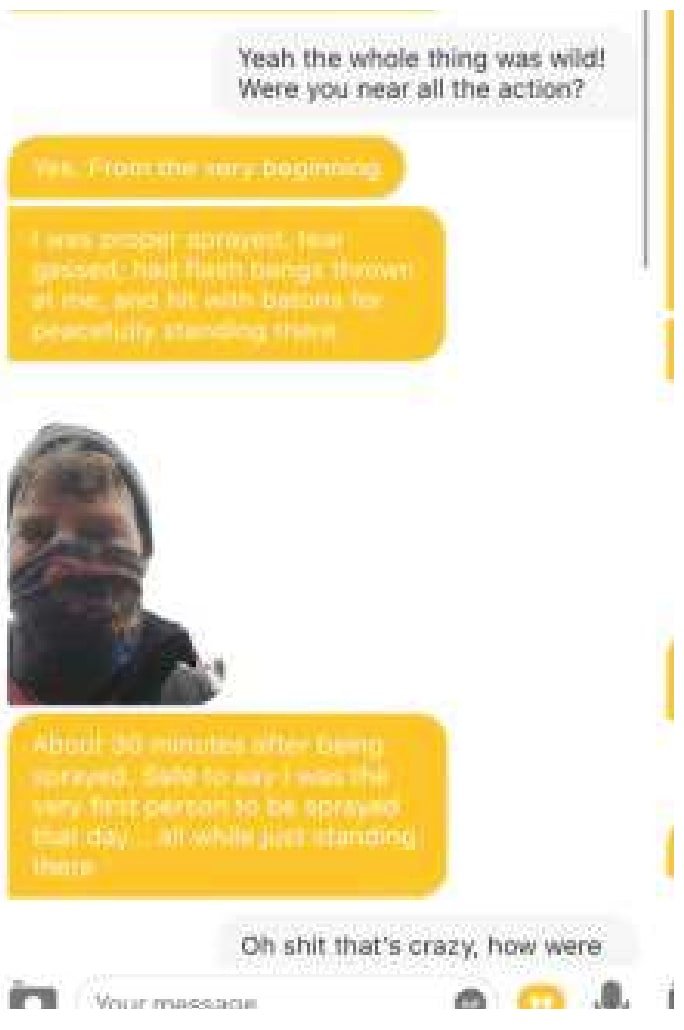 When engaged in criminal activity, one would usually try to flee the scene shortly after. Accused Capitol rioter Andrew Taake, however, apparently tried to score a hot date first.

A criminal complaint filed Friday against Taake alleges that the Houston native attacked police officers on Jan. 6 with a metal whip and pepper spray—then bragged about it on the dating app Bumble. He now faces six charges related to the attack. The allegations were first reported by HuffPost.

The FBI said they received a tip on Jan. 9 from a Bumble user who shared screenshots of their exchange. In it, Taake said he was “pepper sprayed, tear gassed, and hit with batons for peacefully standing there.”

That’s despite social media posts and body-cam footage showing him using a metal whip to attack officers before pepper-spraying them, authorities say. The criminal complaint alleges Taake eventually made his way inside the Capitol, with surveillance footage showing the whip held to his side.

The FBI says Taake’s current location on the Bumble app at the time he was in D.C. was listed as Alexandria, Virginia, while his profile noted he lived in Houston. Flight logs indicated he flew into Baltimore/Washington Airport from Houston on Jan. 5 and listed his cellphone number in flight documents.

After consulting with a FedEx driver delivering a package to his Houston home in May and physically surveilling Taake, the feds believed they found a match.

He is not the first Capitol rioter to be found through Bumble. New Yorker Robert Chapman was arrested in April after also bragging about his participation on the app, eventually changing his Facebook profile picture to a photo from inside the Capitol.