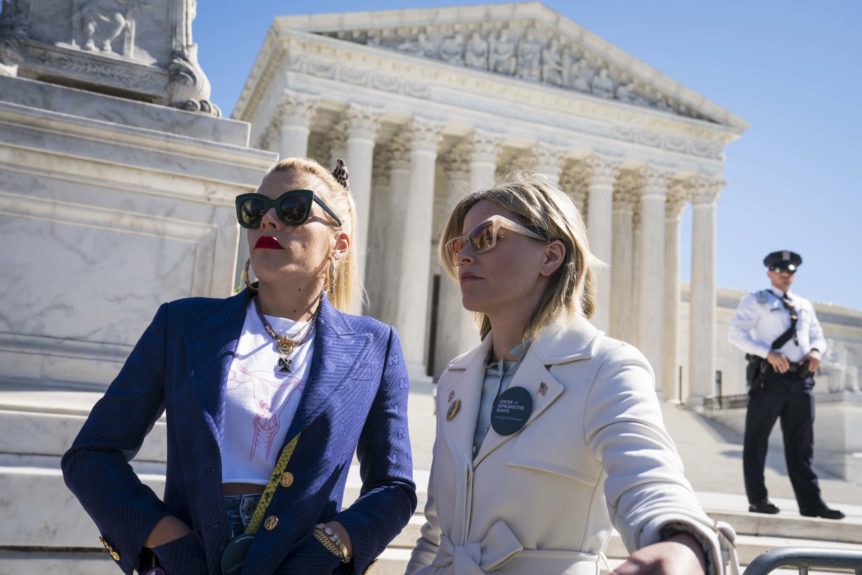 One of the many joys contained within the hilarious new show Girls5eva from producer Tina Fey is its meticulous dedication to recreating the very specific turn-of-the-millennium time period when the fictional girl group at the show’s center reigned supreme. Yet only one of the show’s four stars was famous in the year 1999.

Paula Pell was writing for Saturday Night Live but years away from breaking out on screen. Sara Bareilles was still five years away from releasing her debut album and a decade from receiving the first of many Grammy nominations. Renée Elise Goldsberry was still singing backup on Ally McBeal and wouldn’t win a Tony Award for her role in Hamilton until 2016.

“But I was really, like, in pop culture,” Busy Philipps tells me on this week’s episode of The Last Laugh podcast.

At just 19 years old, Philipps landed her first series regular role as Kim Kelly on Freaks and Geeks the same year that the fake—albeit extremely catchy—song “Famous 5eva” hit the top of the charts. The real-life parallels with her character Summer, who is trying to mount a pop culture comeback in her forties, are hard to miss. It wasn’t until she was making the show last year that Philipps says it “became so obvious” to her “what it was really about.”

“And I think that that speaks to the sneakiness, the subversiveness of Tina’s comedy, always, and the projects that she chooses to put her name on and develop with people,” Philipps explains. “Because the logline is like, ‘90s one-hit girl group tries to make a comeback in their forties. And yet the issues that really are inside of this ridiculous joke-a-minute comedy are about what it means to look back on your past and realize that maybe you weren’t in as much control as you thought you were as a woman.”

The process of re-examining the early days of her career began in earnest for Philipps when she started writing her best-selling memoir This Will Only Hurt a Little. “They say writing your memoir is like doing like 10 years of therapy in the time it takes you to write it, if you really do it right,” she says. “So it was intense. Although I also had done 10 years of therapy.”

The book is full of both funny and painful stories from her two decades in show business, but the one that garnered the most attention—to her apparent disappointment—is the chapter in which she describes James Franco physically assaulting her on the set of Freaks of Geeks. “He grabbed both my arms and screamed in my face, ‘DON’T EVER TOUCH ME AGAIN!’” Philipps recalls in the book. “And he threw me to the ground. Flat on my back. Wind knocked out of me.”

Despite the fact that he had publicly apologized to her for his behavior years earlier, the story blew up online, likely because it coincided with a wave of #MeToo allegations against the actor. I asked Philipps to talk about how the themes of Girls5eva made her reconsider the early part of her career, which also included a stint on Dawson’s Creek, and to share her reaction to her Freaks and Geeks co-star Seth Rogen’s recent decision to stop working with Franco.

Below is an excerpt from our conversation and you can listen to the whole thing—including the moment she realized she wanted to give up acting and how she dealt with the premature cancellation of her late-night show—right now by subscribing to The Last Laugh on Apple Podcasts, Spotify, Google, Stitcher, Amazon Music, or wherever you get your podcasts and be the first to hear new episodes when they are released every Tuesday.

I do want to talk a little bit about Freaks and Geeks, which is where you were 20 years ago in the time period that the show is depicting in the past. I’m curious how you think about that show now, because you’re talking about how you rethought some of those early times. Do you think about it differently now than you did maybe when it was happening or in the years following?

I mean, Freaks and Geeks is sort of less the culprit—the show itself and the people that ran it. It was more really the industry at large. And in fact, I do think that Paul [Feig] and Judd [Apatow] tried in their way to protect Linda [Cardellini] and me from a lot of the insidious nature of the messaging that gets sent to young women and teen girls on network television shows. Because I do remember Paul talking to us about like, I don’t want you guys to think that there are any diets or anything. I’m sure that was not the most comfortable thing for a 32-year-old man to be talking to these, you know, 19- and 21-year-olds.

“I didn’t work with James past age 20, so I can only speak to the horrible behavior I experienced.”

And it was fortunate that the characters that the two of you were playing were not supposed to be these perfect people.

Well, sure, Matt, but that’s fucked too! I mean, I am, objectively speaking, very attractive. You know what I mean?

I didn’t mean it in terms of looks, but rather the characters that you were playing.

No, no, no, I know, but I’m saying like, think about that as a 19-year-old girl, woman, young person trying to break into Hollywood and everyone’s like, “But what’s great is, you don’t even have to worry because you’re just like a regular person!”

That it was supposed to be very real was my point.

Of course! And that is, a hundred percent. But literally Linda found an article, a review of Freaks and Geeks, and showed it to me when it was first starting and there was a line like, “This isn’t Dawson’s Creek or the WB, you won’t find any pretty faces here.” And that was always the messaging that I was told for years and years, was that I wasn’t thin enough and I wasn’t traditionally pretty enough. I mean, when I got on Dawson’s Creek, there was this whole discussion about the moles on my neck and my face. And they tried to cover them with makeup. It was a directive from the network. I guess they found them offensive. My skin offended them. But it was so wild to me. So that messaging wasn’t really coming from within the house on Freaks and Geeks necessarily, but it certainly was always just there and it was understood by anyone who was paying attention.

So I really don’t want to dwell on the story that you told about James Franco in your book. I know that got a lot of attention and you’ve been very clear about how you were not pleased with how much it overtook everything. The one thing I want to ask, because this just happened recently, is that Seth Rogen has been on his book tour and he said for the first time, in a way that he hasn’t before, that he wouldn’t work with James Franco again. And I’m curious what you made of that.

I have to say, I mean, it’s interesting. They were super close and they had a very tight relationship. And so I don’t have any information. I mean, I’m going to say something now, whatever—Seth is married to a very fucking smart woman.

I guess the question is, were you surprised? Because I was surprised that he said he wouldn’t work with James Franco again, just because he hadn’t said that a year ago, two years ago.

I guess I was surprised. Although, to be honest with you, I haven’t spent my days doing deep dives into what it all was. I didn’t work with James past age 20, so I can only speak to the horrible behavior I experienced.

Well, there’s clearly been other horrible behavior that’s happened according to other people who’ve worked with them.

Sure, I mean, that seems very believable. And I can’t speculate on their friendship, but I wouldn’t want to work with someone who has multiple allegations of predatory behavior. So, in fact, I won’t.

Do you find it encouraging in the sense that there’s been all this talk about the #MeToo reckoning and that things are really changing? I think there’s some skepticism across the board as to whether that’s true or not. How do you see it? Do you feel like things are actually changing in Hollywood?

I don’t know. Again, I think at this point, I’m not at risk. I’m an almost 42-year-old woman who wrote a book where I named names of the people who were fucking dicks to me. So I don’t think that I’m the person to ask about whether the industry has changed. Because I would assume that people are going to be smart enough to not fuck with me. But also I’m not an ingenue coming onto the scene, or a young woman coming onto the scene wanting to work and make it happen. The predators, I’m sure, still exist, and a few of the big ones have been rooted out, thank god, but whether there’s a reckoning, I don’t know.

Next week on ‘The Last Laugh’ podcast: The creator and star of ‘Tooning Out the News,’ R.J. Fried.