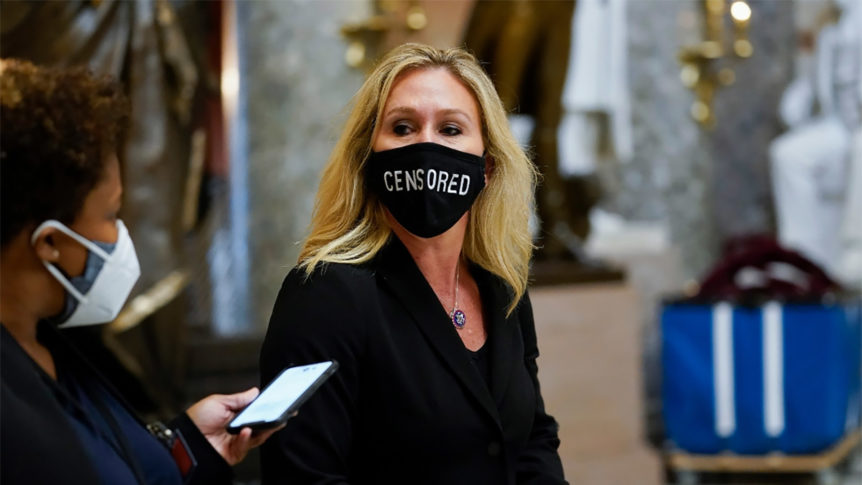 House Democrats, along with 11 Republicans, have voted to remove freshman Congresswoman Marjorie Taylor Greene from all Congressional committees. The action was taken by Speaker Pelosi who stated she was “profoundly disturbed” by the Republican Caucus’ earlier refusal to remove Greene from the committees due to statements made months and years before she was elected to Congress.

Earlier, Republican House Caucus members met to discuss the actions of Congresswoman Greene. The meeting was private but reports state that Greene gave an impassioned testimony and an apology that was followed by a standing ovation by over half the members. Republican leaders chose not to remove Greene.

Pelosi was angered and called for a session to remove Greene. “If any of our members threatened the safety of other members, we’d be the first ones to take them off a committee,” Pelosi said. “That’s it.”

Perhaps Pelosi should get the blue mote out of her eye before she goes after the red. Just two years ago, her fellow California Congresswoman Maxine Waters in a speech at the Wilshire Federal Building called for attacks on cabinet members and in a duly elected White House administration.

“Let’s make sure we show up wherever we have to show up. And if you see anybody from that Cabinet in a restaurant, in a department store, at a gasoline station, you get out and you create a crowd. And you push back on them. And you tell them they’re not welcome anymore, anywhere,” said Waters.

I guess inciting violence is okay toward Cabinet members but not House members. You’ve got some blue mote in your eye here Mrs. Speaker.

Then there is this quote, again from Maxine Waters as she spoke about President Trump and Vice President Pence, “I say knock off the first one and then go after the second one.”

Again, it must be okay because the direct threat is not against a fellow member of the House. Is that mote blinding you, Mrs. Speaker?

Before Speaker Pelosi lectures us from on high through the Sermon of the Mount, it would behoove her to remember what Matthew 7: 1-5 taught us: be careful that you do not judge others, lest you be judged yourself.

No one, and I have asked plenty of Trump supporters, no one condones any threat made against any member of Congress, nor any government official. It is time to call on Speaker Pelosi and the House Democrats to get the blue mote out of their eyes.

What do we know about the Uvalde, Texas school shooter?