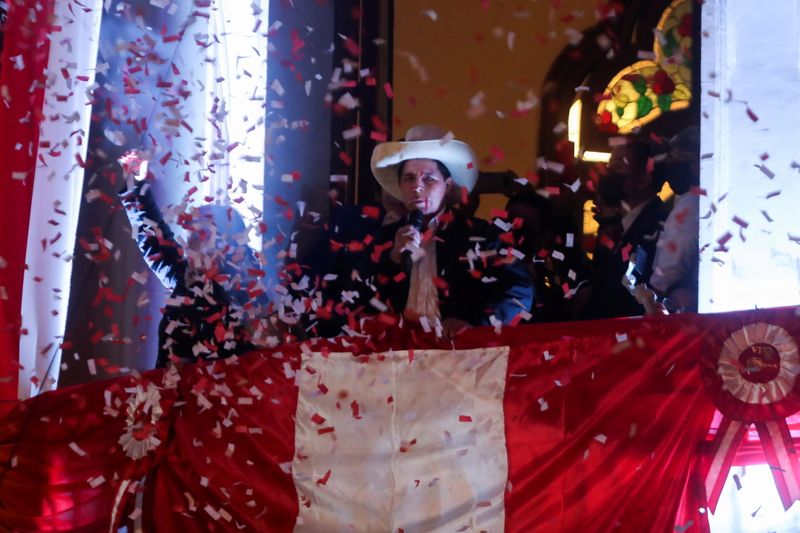 FILE PHOTO: Leftist Pedro Castillo speaks to supporters from the headquarters of the “Free Peru” party after Peru’s electoral authority announced him as the winner of the presidential election, in Lima, Peru July 19, 2021. REUTERS/Sebastian Castaneda/File Photo

LIMA (Reuters) -Peru’s Pedro Castillo has won a long and tense presidential election battle. Now he needs to heal the wounds of a starkly divided nation, split between support for his socialist reforms and fears he will upend the Andean nation’s traditional politics and mining.

Castillo, a wild card candidate for a Marxist party, was proclaimed the winner of the June 6 run-off on Monday night after six-weeks of wrangling over the knife-edge result. He beat right-wing rival Keiko Fujimori by just 44,000 votes.

The former teacher and son of peasant farmers, expected to take office on July 28, won huge support from poorer rural Peruvians fed up with the political status quo amid rising poverty and inequality.

His rise, however, has shaken Peru’s political and business elite, fearful of his pledges to redraft the constitution and take a far larger portion of mining profits from companies in the world’s no. 2 copper producer.

“The people spoke, the people cried out and Pedro Castillo is finally our president,” said Danny Castillo, an unrelated supporter of the leftist candidate after his election win was confirmed on Monday.

“Change is coming for Peruvians, change of the constitution is coming, no more poverty, Peru is rising,” he said.

The President-elect, who wears a wide-brimmed hat and whose supporters carry flags and inflatable yellow pencil insignias of his party, has called for a ceasefire with his defeated rival Fujimori after the divisive election race and hinted his ministers will come from diverse political backgrounds.

“We are making a call to all experts and technicians, to the most distinguished and committed people in the country,” Castillo told reporters on Tuesday, his first comments on his potential cabinet since his win was confirmed.

“We are structuring a work team and I see there are also people who are interested in contributing to support this government, from all across the political spectrum.”

Fujimori – the daughter of jailed ex-President Alberto Fujimori accused of human rights abuses – said she would accept the result, but repeated her claim, with no evidence, that Castillo had stolen votes to win and called on her supporters to mobilize to “defend democracy.”

Castillo says he wants to increase spending on healthcare and education by raising the funds from mining tax hikes. His plans have resonated in a country with the highest per capita death toll from COVID-19 and wide gaps between rural and urban wealth.

His critics, however, including famed Peruvian novelist Mario Vargas Llosa, have claimed he will drag Peru towards authoritarian communist models, citing Venezuela and Cuba.

Castillo himself has downplayed the comparisons and brought into his team more moderate economic advisers to calm market and elite fears.

“We aren’t going to copy any other country’s model,” he said on Monday evening. “We will create true economic development, guaranteeing legal and economic stability.”

Peru’s markets on Tuesday saw the sol currency weaken around 0.30%, while the Lima Stock Exchange index was up 0.27%, with some key mining shares rising.

“This is the time for dialogue,” the National Society of Mining, Oil and Energy (SNMP), which represents leading industry companies, said in a statement, one of the first comments from the sector since the run-off vote.

“Today more than ever we need authorities with leadership and vision of the future who firmly assume the commitment to make necessary reforms to revitalize our battered economy, tackle the health crisis and guarantee the full rule of law,” it stated.

Peru experienced one of its worst political crises in its history in November last year, witnessing three heads of state in a week after a battle between the presidency and Congress, along with violent protests that left two people dead.