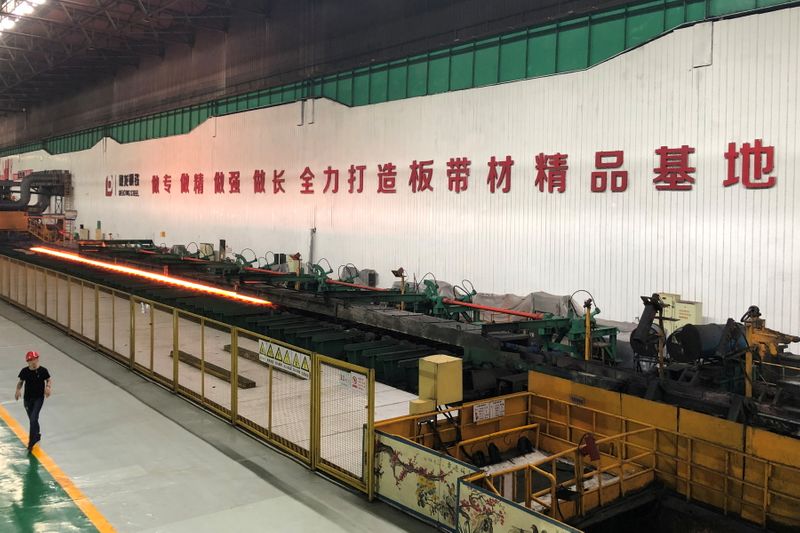 BEIJING (Reuters) – Growth in China’s factory activity dipped to a four-month low in June, weighed by higher raw material costs, a global shortage of semiconductors and a resurgence of COVID-19 cases in the major export province of Guangdong.

The official manufacturing Purchasing Manager’s Index (PMI) eased slightly to 50.9 in June versus 51.0 in May, data from the National Bureau of Statistics showed on Wednesday. It, however, exceeded analysts’ forecast for a slowdown to 50.8.

It remained above the 50-point mark that separates growth from contraction on a monthly basis.

The world’s second-largest economy has largely recovered from disruptions caused by the COVID-19 pandemic, but Chinese manufacturers are grappling with new challenges from higher raw material costs to global supply chain bottlenecks.

An outbreak of coronavirus infections in China’s major export province of Guangdong has also disrupted shipments.

Factory output in South Korea and Japan on Wednesday showed unexpected signs of slowdown, in part due to production disruptions in the auto sector from chip shortages.

China’s official PMI, which largely focuses on big and state-owned firms, showed the sub-index for production eased to 51.9, a four-month low, from 52.7 the previous month. Growth in new orders, however, picked up, as the economy recovered.

New export orders, on the other hand, fell for the second consecutive month in June and at a faster pace.

Zhao Qinghe, a senior statistician at the NBS, attributed the slowdown in production to constraining factors such as a shortage of semiconductors, inadequate coal supply, a power crunch and maintenance of equipment.

With many countries ramping up vaccination programmes, global demand should start to recover faster. But pandemic-driven stimulus measures could supercharge global inflation and add to the problems of China’s vast manufacturing sector.

Chinese authorities have said they would curb any unreasonable increases in commodity prices. The state planner has launched investigations into the coal, iron ore and fertiliser markets, sending prices lower.

A sub-index for raw material costs in the official PMI stood at 61.2 in June, compared to May’s 72.8.

The official non-manufacturing Purchasing Managers’ Index (PMI) fell to 53.5 in June from 55.2 in May, a separate survey from the NBS showed.