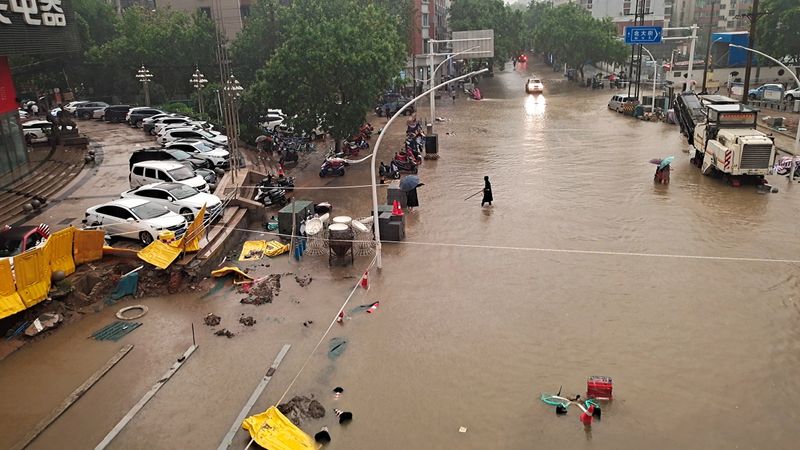 People wade through floodwaters on a road amid heavy rainfall in Zhengzhou, Henan province, China July 20, 2021. China Daily via REUTERS

BEIJING (Reuters) -A raft of Chinese companies, insurers and a state-backed bank said on Wednesday they had offered donations and emergency aid to local governments in flood-stricken Henan province amounting to 1.935 billion yuan ($299 million).

Henan, a province with a population of around 109 million, has been hit by storms since the weekend, resulting in 12 deaths reported so far, the bursting of major river banks and flooding of streets in a dozen cities, damaging auto vehicles, property, and upending the daily life of millions.

More than 20 life insurers and property and casualty insurers said they have opened a fast track for emergency compensation and insurance payouts, according to their respective statements posted on the website of Henan’s Insurance Association.

Three local branches in the rain-hit Xuchang city of Agricultural Development Bank of China are preparing a contingency loan of 1.1 billion yuan, according to a statement by the Beijing-based policy bank sent to Reuters on Wednesday.

Tencent Holdings, ByteDance, Meituan, Didi Chuxing and a unit of Taiwan’s Foxconn, which operates several plants, each said they will donate 100 million yuan.