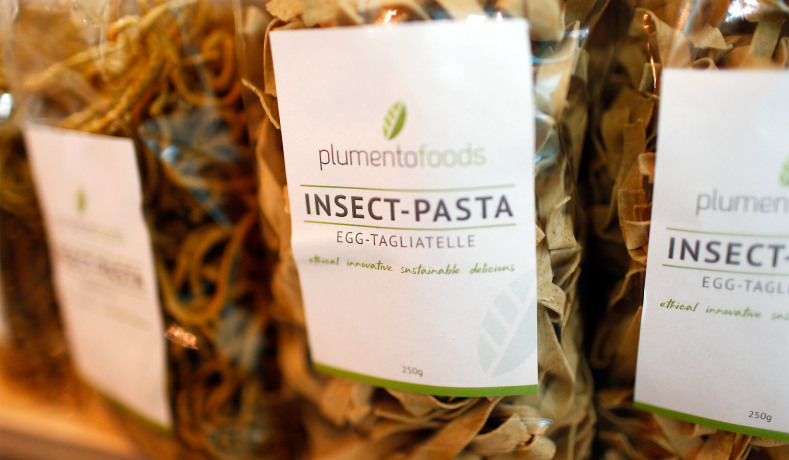 Writing the other day about meat and its enemies, I suggested that the drive to persuade people to eat more insect-based food in order to help save the planet might run into objections from vegans (and some vegetarians):

To the extent that scientists and food technologists can develop nutritious, cost-competitive, and tasty plant-based or lab-grown alt-meat or, aided by creative cooks, conjure up treats out of another much talked-about option, protein-rich insect-based grub, good for them. It only widens consumer choice, for carnivores, flexitarians, vegetarians, or vegans. (Never mind that not many vegetarians and, in theory, no vegans will stoop to entomophagy.)

It was, let’s face it, no great feat of the imagination to think that vegans and vegetarians might have ethical qualms about eating our insect pals, but, judging by an article, “Don’t Farm Bugs,” written by Jeff Sebo and Jason Schukraft  for Aeon, I had underestimated the depth of the moral concerns that might be triggered (for some) by the prospect of mankind’s greedy eyes turning towards hexapod snacks.

Interest in insect farming is booming. Insects have been heralded as a sustainable alternative to traditional animal agriculture, with a litany of articles touting the environmental benefits of insect protein. Socially minded investors have piled into the space, with recent funding rounds totalling more than $950 million.

Socially responsible investing is what it is.

Back to Sebo and Schukraft:

Lost in all the hype is an uncomfortable question: do we want to encourage a food system that farms animals by the trillion?

By number of animals killed annually, the most farmed insects are crickets, mealworm beetle larvae and black soldier fly larvae. The most common slaughter methods on these farms include baking, boiling, freezing and shredding. In most jurisdictions, there are no welfare regulations that govern insect slaughter. Operators are free to kill the insects in whatever manner is most efficient.

The core of Sebo and Schukraft’s argument is based on sentience, or even the possibility of sentience, a thesis that makes for some fascinating reading, both as an idea, but also for some of the examples included:

Researchers who treated a group of shaken flies with the human antidepressant lithium chloride found that the ‘treatment can suppress this depression-like state in flies’.

Well, I found that fascinating.

On the other hand:

While insects have many traits that suggest sentience, they have at least some traits that suggest non-sentience as well. For example, mantids are known to continue mating even as they are devoured by their partner. Injured honey bees do not show more of a preference towards morphine than non-injured honey bees. And even decapitated cockroaches are capable of relatively impressive feats of learning….

I respect the caution implicit in the inclusion of that “relatively.”

If there is a non-negligible chance that insects are sentient, then killing insects is like driving drunk; it imposes a non-negligible risk on others against their will. Granted, the nature of the risk is different. We are definitely killing individuals who are possibly sentient, rather than possibly killing individuals who are definitely sentient. But the result is the same in both cases. There is a non-negligible chance that we are killing sentient beings, and we have a moral responsibility to consider that possibility when deciding what to do.

Well, that rather depends on who is deciding what is or is not “moral.” There is also the small question of hierarchy, a persistent presence within a natural world that is not known for its kindliness, “red in tooth and claw” and all that: Given the choice between saving a billion larvae, or one human (or, for that matter, one dog), I suspect that most (admittedly, human) moral systems would consign the grubs to the grim reaper.

But even if we remove the either/or (human  or bug) from the equation, how to decide whether an insect’s death is “necessary?” Some savages, of course, might think that this isn’t even worth considering.

Entertainingly, in the light of all the proselytizing in a wider and wider section of the media, Sebo and Schukraft appear not altogether convinced by those who argue that entomophagy will help save the planet:

[I]nsect farming is not the public health or environmental saviour that it claims to be. The reality is that insect farming and traditional animal farming are mutually reinforcing systems. Industry insiders know that selling insects for human consumption is not profitable at scale. (The ‘yuck’ factor will take a long time to overcome.) Thus, the new insect farms are selling their product primarily to huge aquaculture operations in which ground insect powder is added to fishmeal. The industry is also lobbying hard to allow chicken and pig factory farmers to use insects as feed. By reducing the cost of animal feed, insect farming might enable an expansion of factory farming systems.

The environmental benefits of insect farming are thus misleading. Farmed insects are not replacing other farmed animals; they are being fed to them. The emergence of insect farming thus reinforces another already inefficient supply chain. Plant-based supply chains – including for plant-based meats – are generally much more sustainable than the animal-based supply chains to which insect farms are contributing. And humans can produce plant-based proteins without bringing into existence trillions of possibly sentient beings each year, all so that we can then confine them, kill them and eat them either directly or, more likely, indirectly, via other farmed animals.

Unfortunately, plant-based agriculture also harms insects, through the use of agricultural insecticides….

Anyway, read the whole thing and draw your own conclusions. To me, it was an intriguing discussion in its own right, but also as an example of how far, as a species, we can take an argument.

Meanwhile, no larvae will, I hope, be harmed in my upcoming dinner – a street-bought hot dog.