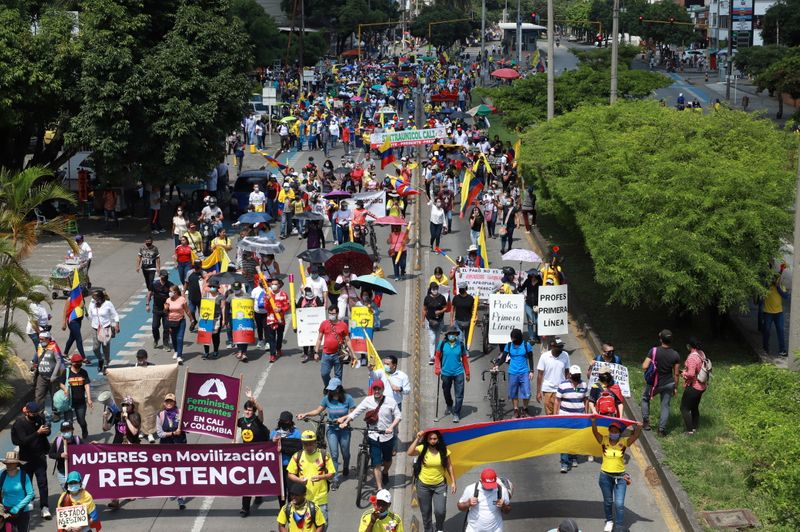 BOGOTA (Reuters) – Colombia’s antigovernment protests could grow in the second half of the year if neither the government nor Congress meet the economic and social demands driving them, a union leader said on Thursday.

Protests against the government of President Ivan Duque exploded at the end of April in opposition to a now-withdrawn tax reform. While largely peaceful, they have been marked by occasional violence and clashes between police and protesters.

Though the proposed tax bill was withdrawn, prompting the resignation of the then-finance minister, protesters’ demands have expanded to include a basic income, opportunities for youth, and an end to police violence.

“(There will be) a great national strike in the second semester,” Francisco Maltes, president of the Central Union of Workers (CUT), told Reuters in an interview. “It’ll be of greater proportions because citizens have understood that it’s through unity and peaceful mobilization that we can achieve changes in this country,”

Earlier this month Maltes and other protest leaders, who make up the national strike committee, suspended marches while they work on laws to present to Congress in the legislative period due to start on July 20.

“If neither the president nor Congress solve the needs of Colombians, of course the next national strike will be bigger, more powerful, and last longer than the strike that began on April 28,” Maltes said.

While almost all road blockades that formed part of protests across Colombia have been lifted, demonstrations involving hundreds of protesters continue in the capital Bogota and other cities.

So far the attorney general’s office has linked 24 deaths to the protests, with a further 11 under investigation. However, rights groups accuse security forces of killing dozens more protesters.

Protest leaders are open to restarting talks with the government if it signs a pre-agreement establishing guarantees for protests and withdraws a decree permitting militarization of cities, Maltes said.

The union leader rejected accusations protests have driven inflation and unemployment, as well as suggestions that marches are behind an increase in coronavirus infections and deaths, instead blaming the government for poor management of social and economic policies, as well as for a slow start to vaccinations.

Protests are not intended to topple the government, Maltes said, but rather to push for a solution to economic and social crises afflicting the majority of Colombians.

“We’re talking about policy changes, not overthrowing the president,” he said.