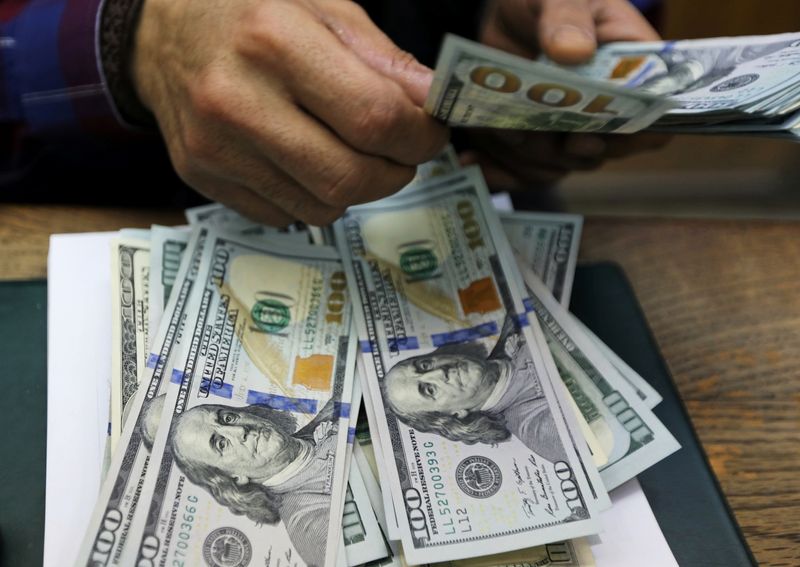 LONDON (Reuters) – After 16 months of betting against the U.S. dollar, currency speculators appear to have thrown in the towel.

Whether that’s positive or negative for the world’s biggest reserve currency is always a moot point. Extreme positioning often proves to be a contrary signal revealing more about stretched, overcrowded trades than a direction of travel.

True to form, the overwhelmingly negative consensus on the dollar’s direction coming into 2021 ended up being one of the ‘pain trades’ of the year.

Measured against the world’s second biggest reserve unit, the euro, or even the DXY basket of the world’s most-traded currencies, the dollar is up about 3% since January.

But now comes a test. Given differing policy trajectories from the Federal Reserve and the European Central Bank over the remainder of the year, there’s a significant chance the speculative pendulum swings in favour of the greenback.

The market looks basically back in balance for the first time since March 2016 – when a stress-related surge in demand for dollars as the pandemic unfolded was quickly reversed by a mix of Fed easing, central bank swap arrangements and a critical return of worldwide risk appetite.

What’s more, the liquidation of those remaining net short positions this month has been both rapid and widespread.

MUFG Global Markets Head of Research Derek Halpenny points out that when you crunch the CFTC numbers further the drop in the combined total of short dollar positions held by asset managers, institutional investors and leveraged funds was the biggest two-week unwind in 8 years.

And Halpenny reckons the dollar could strengthen moderately from here – even if the more relaxed positioning “should reduce the risk of substantial further gains”.

They see the dollar rising from here as the Fed/ECB directional split wins out and U.S. nominal and real yields start to move higher again. “The inflation and global growth themes are unlikely to be as long-lasting as the theme of policy divergence.”

BATTLE OF THE BALANCE SHEETS

All are valid and all will play some part.

But there’s a market maxim that currency rates tend to overshoot and there’s plenty of historical evidence of markets moving from one extreme to another.

Full pendulum swings in speculative positioning don’t always play out but there have been three such pole-to-pole switches in the last 4 years alone. It’s taken on average of 16 months to move from one to another and right now we’re only six months on from the most recent peak net short.

Market difficulty parsing the course of central bank policies and the pandemic has been clear from the spectacular anti-consensus slide in U.S. Treasury yields in recent weeks. But that slump was matched in euro government bond yields too and so the dollar held up throughout.

If those bond yields decouple and one moves back higher, it’s far more likely on the western shores of the Atlantic.

That retreat in real U.S. 10 year yields to record sub-zero levels means it will be hard for the Fed to be any more dovish than already assumed by bond markets as it nods to discussions about tapering its bond buying this week.

What’s more, if the Fed wants to ensure the recent inflation spike is as transitory as it hopes, then a higher dollar will help in that regard by dragging on import prices.

The ECB’s new 2% inflation target, meantime, means it’s more likely to add to its bond buying than take away from it as medium-term inflation forecasts and expectations remain about half a percentage point below there.

And so a weaker euro, by contrast, may help in lifting those subdued inflation expectations more in line with its new regime.

Research published late last year by ECB economists revealed the extent to which euro/dollar was affected by the differing pace of quantitative easing between the two central banks.

They concluded that Fed expanding its balance sheet by 16 percentage points more than the ECB in the six months after the pandemic hit accounted for a 6% rise in euro/dollar – about two thirds of the overall move in the pair.

That balance sheet battle has evened up since. The ECB’s balance sheet expansion has been 6 percentage points faster than the Fed’s over the past 9 months – with little or no move in the exchange rate to follow.

Based on that alone and the relative QE speeds going forward, the currency pendulum could well start to move in the other direction.