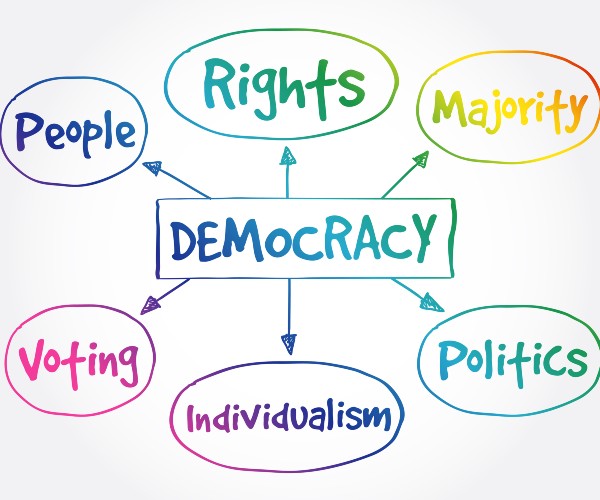 But this generalization is only valid for governments, not for private organizations.

The question naturally arises: how can abuses by top corporation leaders be controlled?

Contract, corporate, and labor law hem them in.

Executives violating their employment contract, the corporate charter, or their duties to shareholders can be taken to court and can be fired.

And corporations which commit torts or crimes are legally accountable.

Some critics, however, have contended that what is really needed is to democratize each organization so its leaders are responsive to the desires of the majority of its members.

Popular slogans back in the 1960’s and 1970’s, the heyday of this idea, included: “corporate democracy,” “democratize the university,” “industrial democracy.“

But who is a “member” whose desires a corporation should be responsive to? Stockholders, no doubt. But what about employees? Customers? Creditors? Neighbors? Competitors?

We shouldn’t uncritically extrapolate insights gained in the context of government into the different context of organizations like corporations.

Employees, stockholders, creditors, and customers associate with a corporation only when they consent to do so. But people who live in an area controlled by a given government do not have the ability to consent or refuse to consent to be governed by it.

Avoiding problems with minority rights would require that a government’s decisions be supported unanimously, but a unanimity requirement would make government impossible.

Laws are enforced with deprivations of life, liberty, or property, and no one will consent to this. Therefore for governments majority decision is the best possible principle.

To call a corporation, where everybody associated with it has consented to do so, “undemocratic” is both correct and misleading.

If it’s undemocratic, that is better than democracy.

Unanimity is better than majority decision.

Unanimity here does not mean that all of the people connected with a corporation are happy with everything about it and about all of the terms of their relationship with it.

It only means that all of them, unanimously, consented to associate with it because on balance the relationship serves their interests.

Effective corporation leaders, of course, should seriously consider proposals made by employees, who often are better acquainted with the details of their work than are the executives.

Failure to do so may encourage the better employees to jump ship and move to employment where their talents are put to better use.

But this is in no way “democracy,” and responsibility for making the final decisions will necessarily rest with the executives.

Corporations in which participants mutually agree to organize their affairs democratically are not inconceivable and sometimes exist.

If people prefer to trade off other values in order to work in organizations that are internally democratic, they should be free to do so.

That in general people do not prefer to do this suggests that in a corporation, like in any non-governmental association, democracy is usually a step backwards from the ideal, not a step forward.

Under these circumstances calls for government to require “corporate democracy” should be brushed off as misguided.