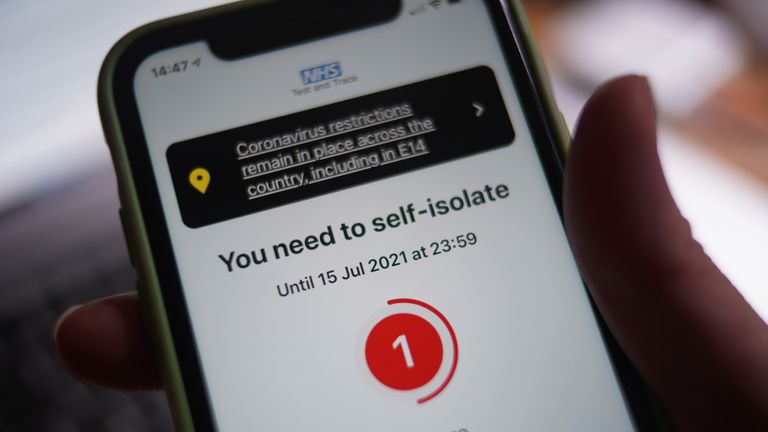 Fully vaccinated people will not be legally required to take a coronavirus test to avoid isolation if “pinged” from 16 August, Sky News understands.

It has already been announced by the government that people who have been double jabbed will no longer have to isolate after contact with someone who tests positive for COVID-19 from that date.

Instead, it had been expected that people would have to take a test to leave isolation.

But Sky News understands the tests will be encouraged rather than mandatory – unless you develop symptoms.

It means individuals who have received two vaccine doses by the mid-August date will neither have to isolate or take a coronavirus test if they are identified as a close contact of a positive coronavirus case unless they themselves feel unwell.

The decision to further loosen isolation rules comes in the week that Prime Minister Boris Johnson exited his own period of self-isolation.

The prime minister and Chancellor Rishi Sunak were forced into quarantine after they were identified as close contacts of Health Secretary Sajid Javid who tested positive for the virus.

And last week, Labour leader Sir Keir Starmer was told to isolate after one of his children contracted COVID-19.

Currently, people who alerted by the NHS coronavirus app after coming in to contact with someone who has the virus must quarantine for 10 days no matter of their vaccine status – with a few exceptions including emergency workers.

If an individual is told to isolate by NHS Test and Trace the isolation period is legally mandated, whereas if they are notified by the app it is only advised.

This rule will change on 16 August when the government hopes to scrap isolation for those double-jabbed unless they get symptoms of the virus.

But ministers are under pressure from business leaders to bring this date forwards with concerns about the number of people being forced into isolation due to the so-called ‘pingdemic’.

On Wednesday the number of infections in the UK fell for the seventh day in a row, with 23,511 new COVID-19 cases and 131 more coronavirus-related deaths in the latest 24-hour period.

But the figure was the highest number of daily deaths since 17 March, when 141 fatalities were reported.

Earlier this week, the government expanded the list of sectors able to avoid quarantine as part of a pilot scheme.

They also increased the number of testing sites across England – with 1,200 new sites being added to 800 already in operation.