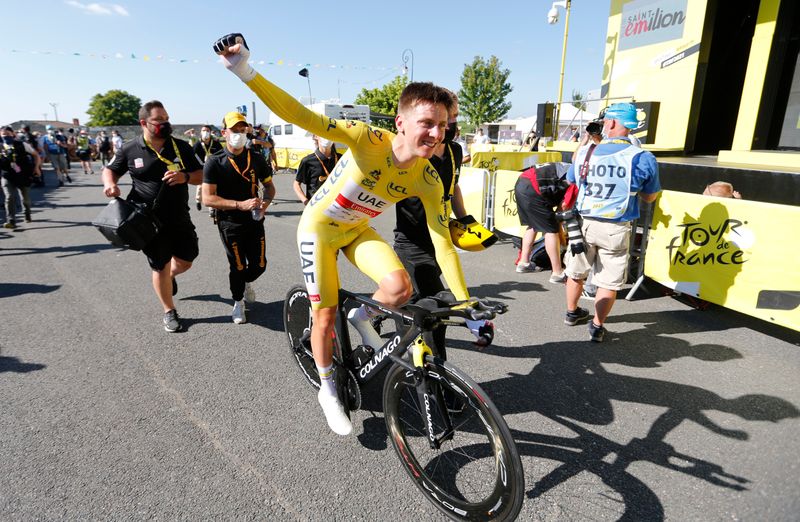 SAINT EMILION, France – Tadej Pogacar was poised to win a second consecutive Tour de France title as the Slovenian retained his overall lead following the final time trial, a 30.8-km solo effort from Libourne on Saturday.    The 22-year-old UAE Emirates rider finished eighth in the 20th stage won by Belgian Wout van Aert (Jumbo-Visma), who clocked a best time of 35 minutes 53 seconds.     Danes Kasper Asgreen and Jonas Vingegaard were second and third respectively in the 20th stage, 21 and 32 seconds off the pace.    Overall, Pogacar leads Dane Jonas Vingegaard by five minutes 20 seconds and Ecuador’s Richard Carapaz by 7:03 ahead of Sunday’s final stage, a largely processional ride from Chatou to the Champs Elysees in Paris.    The UAE Emirates rider bettered his rivals in the opening time trials and in the mountain stages, claiming a total of three stage wins in a dominant performance.    It came in sharp contrast with last year, when Pogacar snatched the overall lead in the final time trial only as his fellow Slovenian Primoz Roglic cracked in the uphill drag to La Planche des Belles Filles.    This time, Pogacar was the favourite and he duly delivered, even though he benefited from his main rival’s failure with Roglic pulling out ahead of the eighth stage following a crash earlier in the race.    Crashes also effectively ruled 2018 champion Geraint Thomas out along with his Ineos Grenadiers team mate Tao Geoghegan Hart, the 2020 Giro d’Italia winner.    Just like last year, Pogacar won the white jersey for the best Under-25 rider and also the polka-dot jersey for the mountains classification.    Pogacar is now the youngest double winner of the race.

Following the Slovenian’s stunning ride to Le Grand Bornand during stage 8, his challengers were left racing for second place.

That day, he went solo in the Col de Romme, the penultimate climb of the day, to pull away from all his rivals in a long-range move reminiscent of racing in the 1980s to take the yellow jersey.    He then increased his advantage steadily and was in trouble only once on the slopes of a overheated Mont Ventoux when he was briefly distanced by Vingegaard.    Riding with the composure of a veteran, Pogacar lost no time that day and he beat Vingegaard and Carapaz in the two summit finishes in the Pyrenees.    Briton Mark Cavendish, who equalled Eddy Merckx’s all-time record of 34 stage wins, is set to wrap up the green jersey for the points classification for the second time in his career after 2011.    Fellow sprint specialist Andre Greipel said before the stage that he would retire at the end if year, the German having won 11 stages on the Tour between 2011 and 2016.