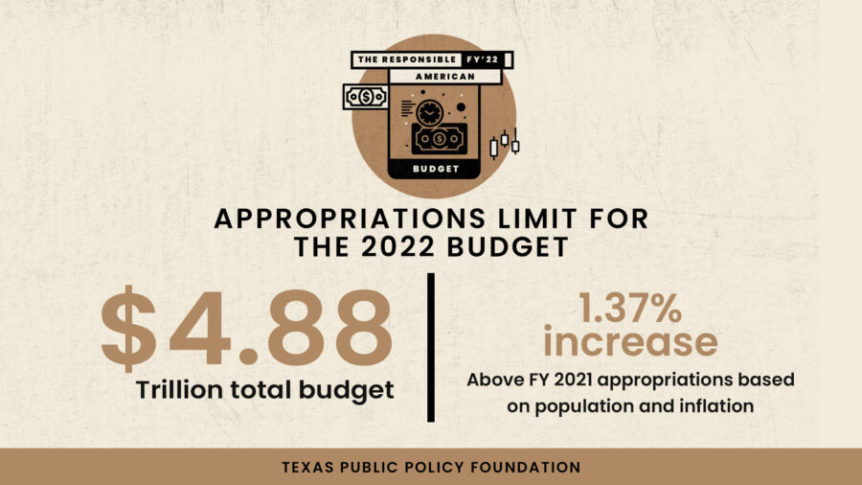 The very popular narrative is that Republicans only care about budget deficits and the spiraling national debt when Democrats are in charge. Writing in the Washington Post’s “The Fix” column, J.M. Rieger says that “Republican mea culpas on the national debt follow years of demands for spending cuts to reduce the debt.”

But I was there in the Trump White House, in the Office of Management and Budget. The truth is that the President’s FY 2021 federal budget proposed a record of $4.6 trillion in less national debt over a decade, made most of the Trump tax cuts permanent, and would have balanced the budget over time.

In my work since then at the Texas Public Policy Foundation, we have helped other states move toward our model of a Conservative Texas Budget, and now—working with the Republican Study Committee and many others—we’re doing the same for the gargantuan federal budget. The proposed path to bring fiscal sanity back to Washington, D.C. is the Responsible American Budget.

At the state level, Texas has addressed this with the Conservative Texas Budget. Its main premise is that government shouldn’t grow any faster than the average taxpayer’s ability to pay for it. To provide a bright line marking the limit, we use a proven, simple formula: population growth plus inflation.

This simple formula provides a view of the budget from the taxpayers’ perspective, which is essential given the government has no money but rather collects taxes from us to fund limited roles given to the federal government.

By combining the fact that Texas has an increase of about 1,000 new Texans per day and Texans’ wages are correlated with price inflation, more people and higher wages can support more government provisions, as necessary. This doesn’t mean that government must grow by this simple formula but rather this is the maximum growth each year to avoid further burdening Texans.

As Milton Friedman noted, “the true burden of government is not how much it taxes, but by how much it spends.” Any growth in government spending that exceeds our simple formula represents the kind of growth that means a heavier burden on taxpayers.

That kind of expansion is bad for working families, who pay a larger portion of their income in state and local taxes. In Texas, we have successfully kept the state’s budget below the CTB limits, on average, for the last three legislative sessions, and look to do so again during the current session.

While there have been several attempts to reduce the excessive growth of federal spending in the U.S., these attempts have had limited success, if any, as indicated by the $28 trillion—and quickly rising—national debt and its $350 billion—and skyrocketing—interest payments.

And despite the attempts by the Trump administration to rein in excessive government spending, Congress wasn’t interested and ran up massive spending that led to annual deficits. And then any movement toward reducing it was negated by the COVID-19 pandemic and ensuing fiscal profligacy. It led to appropriations outside of the normal federal budget process of at least $6 trillion over a decade during the Trump and Biden administrations. While some of these appropriations may have been necessary, it clearly made the fiscal path substantially worse.

Based on the fiscal problems facing the U.S., the federal government needs an annual budget benchmark. We offer such a benchmark in the form of the Responsible American Budget (RAB). The RAB provides a maximum threshold to freeze real (inflation-adjusted) per capita spending, which is simply a limit based on population growth plus inflation.

What would this look like? According to our calculations, a RAB for fiscal year 2022 would be no higher than $4.88 trillion, representing a 1.37% increase over FY 2021, excluding the extraordinary pandemic-related expenditures to not inappropriately inflate the baseline budget to allow for excessive spending later.

The costly effects of these fiscal and subsequent monetary policy excesses challenge Americans’ opportunities to improve their communities’ as well as their future by owning a business, having the dignity of work, saving for a rainy day, and donating to institutions throughout civil society.

The RAB’s spending restraint and its fiscal benefits would allow for a more inclusive institutional framework that supports more freedom for people to choose their destiny and more opportunities to flourish.