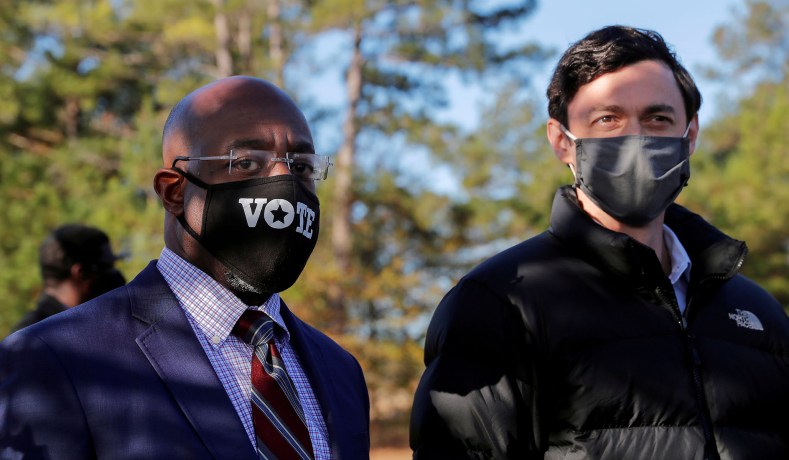 To hear Democrats talk, SB 202, the new voting and elections law in Georgia, “makes Jim Crow look like Jim Eagle,” as Joe Biden put it, also calling it “Jim Crow on steroids.” Stacey Abrams calls it “a redux of Jim Crow in a suit and tie.” Jon Ossoff: “We must defeat the new Jim Crow.” Raphael Warnock: “We are witnessing right now a massive and unabashed assault on voting rights and voter access unlike anything we have seen since the Jim Crow era.” When Major League Baseball announced that it was pulling this summer’s All-Star Game out of Atlanta after Biden said he would “strongly support” such a move, defenders of MLB’s boycott rushed to argue that this was justified because, if you were against corporate political stances, you must have been against corporations boycotting the Jim Crow-era South.

But then a funny thing happened: realizing that they had just inflicted a big loss on the Atlanta area, Georgia Democrats started running away from Biden’s position. Abrams bailed out after Biden’s remarks, even before MLB reached its decision:

Black, Latino, AAPI and Native American voters that are the most suppressed over [the new law] are the most likely to be hurt by potential boycotts of Georgia. To our friends, please do not boycott us. To my fellow Georgians, stay and fight, stay and vote.

“Leaving us behind with boycotts won’t save us,” Abrams continued in an op-ed. “I ask you to bring your business to Georgia and, if you’re already here, stay and fight.” She now says that she tried to talk MLB out of the boycott. Ossoff scurried backwards as well:

“I absolutely oppose and reject any notion of boycotting Georgia,” Ossoff tells National Review in a written statement. “Georgia welcomes business, investment, jobs, opportunity, and events. In fact, economic growth is driving much of the political progress we have seen here. Georgia welcomes the world’s business. Corporations disgusted like we are with the disgraceful Voter Suppression bill should stop any financial support to Georgia’s Republican Party, which is abusing its power to make it harder for Americans to vote.”

Warnock waffled, but put out a statement saying, “It is my hope that businesses, athletes, and entertainers can protest this law not by leaving Georgia but by coming here and fighting voter suppression head on, and hand-in-hand with the community.” Local Democrats were not notably enthusiastic about the boycott. Consider newly elected Cobb commissioner Jerica Richardson:

County leaders—government, business and community—had been eyeing the extravaganza as a vehicle for economic development in the aftermath of COVID-19 as well as civic pride four years after the Atlanta Braves moved to Cobb. And as part of an historic black female Democratic majority on the Cobb Board of Commissioners, Richardson was eager to demonstrate the political and cultural evolution taking place in a county long known for deeply conservative, mostly white elected officials…“We’re obviously not happy at all, Richardson said in an interview with East Cobb News. “I wanted to use this as an opportunity to show leadership.”

As the Daily Beast summarized the reaction: “Biden Pisses Off Georgia Dems with Support for Moving All Star Game.” And as Jim Geraghty details, many businesses are not being pressed to boycott the state.

Now, step back for a minute. What if this really was Jim Crow revived, or Jim Crow on steroids? What if the new law was expected to disenfranche many black voters and, in Warnock’s words, was an attack on “democracy itself?” Wouldn’t it be morally mandatory to pull business out of the state and grind its economy to a halt to stop this? And if you are against those steps, isn’t that an admission that this is not really what is happening?

The fact that Georgia Democrats are now so desperate to be seen opposing boycotts of the state’s economy is the best evidence that they never really believed their own overheated rhetoric in the first place, and are now in a panic at what happens when you tell lies so big, they escape your control and take on a life of their own. We have seen before where that leads. It is comforting to see that they now recognize that they have gone too far. Georgia voters should ask what else these people are lying to them about.