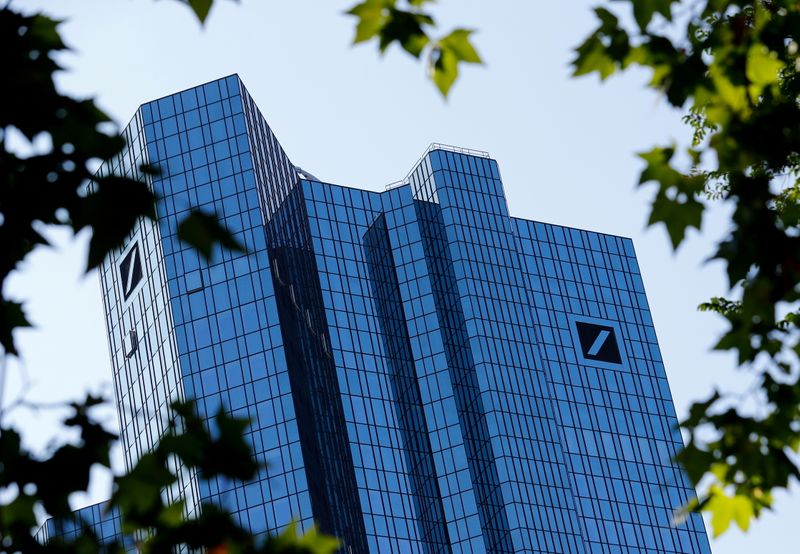 By Tom Sims and Patricia Uhlig

FRANKFURT (Reuters) -Deutsche Bank on Wednesday delivered a fourth consecutive quarterly profit for the first time in nearly a decade and raised its revenue outlook despite a decline in business at its investment bank.

Second-quarter profits at Germany’s largest bank beat expectations and outperformed rivals in fixed income trading. The results also benefited from a sharp drop in provisions for loans at risk of souring during the pandemic.

The strong second-quarter is good news for CEO Christian Sewing, who launched a major restructuring in 2019 to return the bank to profitability after a string of regulatory failings and 8.2 billion euros ($9.7 billion) in losses over the past 10 years.

Sewing said in a memo to staff: “The right strategy and hard work do pay off.”

The bank’s executives said they were bullish on its prospects and Sewing told analysts that revenue next year would probably be higher than previously forecast – perhaps exceeding 25 billion euros rather than a previously targeted 24.4 billion euros.

Net profit attributable to shareholders came in at 692 million euros, from a loss of 77 million euros a year earlier. The figures were better than analyst expectations for a profit of 372 million euros.

The bank decided to abandon a key cost target, which aims to reduce costs to 16.7 billion euros by 2022. The move came after Deutsche Bank flagged a number of unexpected outlays in recent months.

Deutsche said it would now focus on a cost-to-income ratio target of 70%.

CEO Sewing said: “Our priority now is to continue with our disciplined execution of transformation, quarter by quarter.”

Deutsche Bank’s results were supported by a decrease in provisions set aside to cushion fallout from the coronavirus pandemic. Provisions for credit losses were 75 million euros, down from 761 million euros a year earlier.

The investment bank’s advisory business was a standout amid a dealmaking boom, with revenue surging 166% to 111 million euros. An increase in asset management revenue and fees also helped to boost the bottom line.

Much has been riding on the performance of Deutsche’s investment bank, the group’s biggest revenue generator that helped the bank to eke out a small profit for 2020, its first after five years of losses.

Gains in the investment banking business allowed Deutsche to produce its strongest quarter in seven years at the start of 2021.

Revenue at this business declined 11% in the second quarter from a year earlier. It was the biggest fall in investment banking revenue since the bank’s revamp two years ago, but U.S. rivals also had a weaker quarter.

Barclays, which also reported earnings on Wednesday, beat forecasts on strong investment banking fees but its fixed income, currencies and commodities business was down against a strong first half a year ago.

Revenue at Deutsche’s fixed-income and currency sales and trading business dropped 11% to 1.8 billion euros. But markets divisions at major U.S. investment banks had a 28% decline in revenue, based on analyst research from Barclays.

Sewing in his staff memo compared the bank’s turnaround process to a marathon: “The 30-kilometre (19-mile) mark is where it starts to really hurt. But we also know that it is worth pushing on.”