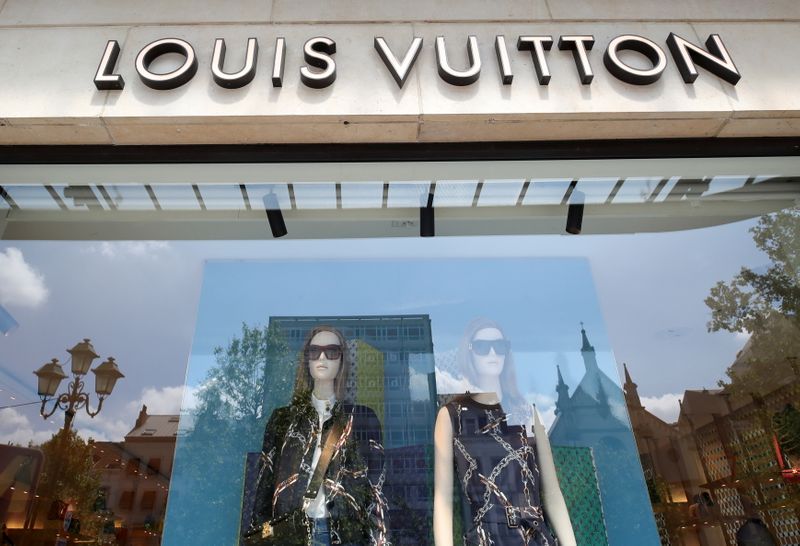 FILE PHOTO: A logo of luxury goods company Louis Vuitton is seen at the entrance of a shop in Brussels, Belgium July 2, 2021. REUTERS/Yves Herman

By Silvia Aloisi and Mimosa Spencer

PARIS (Reuters) -Surging sales of fashion lines and handbags by Dior, Fendi and Louis Vuitton powered LVMH’s revenues in the second quarter as coronavirus restrictions eased around the world and the luxury goods group edged out some rivals to raise its market share.

The luxury goods industry is recovering from the health crisis, which shut down global travel and temporarily closed stores. The end of COVID-19 lockdowns across much of Europe is reviving demand in the region after a strong Chinese rebound.

LVMH, the world’s biggest luxury goods group, has benefited more than most, using its heft to spend on marketing and social media campaigns when some of its smaller rivals are still struggling to get back on their feet.

The conglomerate said on Monday that its biggest revenue driver, Vuitton, as well as fashion brands Dior, Fendi, Loewe and Celine had posted record sales and profitability in the first half of 2021 and increased their market share.

Brands have ramped the number of “pop-up” temporary shops in resorts, which travellers are returning to, and are refurbishing some other stores, the company said.

Financial Chief Jean Jacques Guiony told reporters the group had “room for manoeuvre” on margins to be able to invest more in the second half of the year without impacting profitability.

“It’s certainly not the mood of the various brands, particularly in fashion and leather … to stay quiet, particularly from a marketing viewpoint,” Guiony said.

Overall sales at the LVMH, which also owns champagne and cosmetics labels, rose by 84% year-on-year in the second quarter on a like-for-like basis, which strips out currency swings, and stood at 14.7 billion euros ($17.36 billion).

That beat an analyst consensus forecast for 69% growth cited by UBS but in line with HSBC estimates. It was also 14% above pre-pandemic, 2019 levels.

Operating profit in the first six months of this year more than quadrupled compared with a year ago, beating expectations among analysts polled by Refinitiv.

“This update should reassure, as the sector goes through an inflection,” Bernstein analyst Luca Solca said in a note.

Gucci owner Kering, LVMH’s major Paris-based rival, and handbag maker Hermes, which have also bounced back from the COVID-19 crisis, are due to report results this week.

Shares in LVMH have surged by more than 70% since June last year, making the group the biggest European company by market value and allowing boss Bernard Arnault to briefly overtake Amazon founder Jeff Bezos as the richest man in the world.

Fresh from its $15.8 billion purchase of U.S. jeweller Tiffany, completed in January, Guiony said LVMH was still interested in smaller deals to access new markets, technologies or products, though it had no plans for more “big acquisitions” for now.

It has also taken a minority stake in a new label being launched by Celine’s former star designer Phoebe Philo, and raised its holding in Italian shoemaker Tod’s to 10%.

Away from fashion, it teamed up with Italy’s Campari to invest in wines and spirits e-commerce companies and create a European e-commerce player in the sector.

LVMH’s revenues had dropped 16% last year, when the pandemic triggered global lockdowns and international travel ground to a halt.

Its retailing division, which includes beauty chain Sephora and also duty free group DFS, has suffered more than its other businesses, although it clawed back some ground in the second quarter.