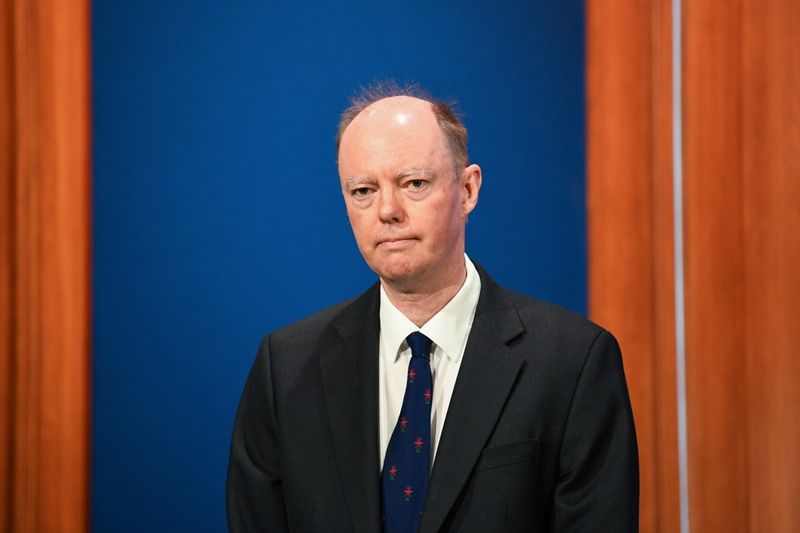 LONDON (Reuters) – Britain on Tuesday condemned the “disgusting” harassment of the government’s top medical adviser, Chris Whitty, after footage emerged on social media of two men grabbing him around the head as he walked down the street.

Jeering loudly and grinning at the camera, the men are seen in the film, published on Twitter, manhandling Whitty, 55, who has become one of the nation’s most prominent officials because of his regular appearances at coronavirus pandemic briefings.

They hold onto him before he manages to break free and walk away across the road.

“This is disgusting and these thugs must be found and charged. Zero tolerance for harassing a public servant,” Nadhim Zahawi, the vaccines minister, said on Twitter.

“We will not tolerate this sort of behaviour towards our public servants. The men behaving in this disgraceful way should be ashamed,” Javid said.

Police said the matter was being investigated. It was not clear from the footage when the incident took place.

“We are aware of a video being shared online showing an incident in St James’s Park,” police said on Twitter. “Officers spoke to all those involved at the time and their details were taken.”

It is not the first time that Whitty or other senior officials have faced harassment, having previously been targetted by those who are opposed to the COVID-19 vaccine rollout or lockdown restrictions.

Last week, England’s deputy chief medical officer Jonathan Van-Tam was verbally abused as he walked into a government building by a protester.