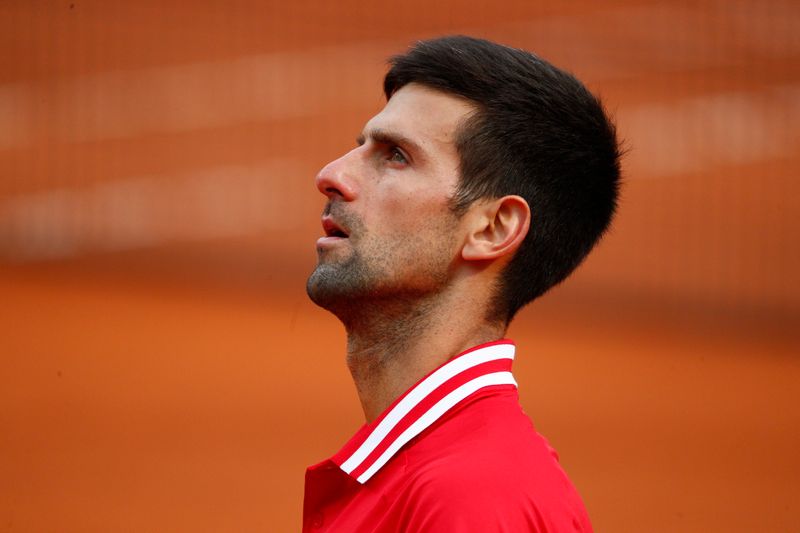 MELBOURNE (Reuters) – Facing the media can be “very unpleasant” but it is part of tennis, said world number one Novak Djokovic, as debate continued to rage on Friday over Naomi Osaka’s decision to boycott press conferences at the French Open.

Women’s world number two Osaka stunned the tennis world when she announced she would not do any press conferences at the Grand Slam to protect her mental health, prompting criticism from French Tennis Federation President Gilles Moretton.

Djokovic said Osaka, “probably (had) her reasons why” but fell short of endorsing the four-times Grand Slam champion’s move.

“I understand that press conferences sometimes can be very unpleasant,” Djokovic told reporters after beating Federico Coria 6-1 6-0 to reach the Belgrade Open semi-finals on Thursday.

“And it’s not something that you enjoy, always, you know, especially if you lose a match or something like this.

“But it is part of the sport and part of your life on the tour. This is something we have to do, otherwise, we will get fined.

“I mean, that’s at least the case on the men’s side. I don’t know about the rules on the women’s side. So that’s all I can say.”

According to Grand Slam rules, players must attend post-match media conferences within 30 minutes of their match finishing or be subject to fines of up to $20,000 unless injured or physically unable to appear.

Serbian Djokovic has fallen foul of the rule, receiving a fine of $7,500 after skipping media following his disqualification from the 2019 U.S. Open for hitting a ball into a line judge’s throat.

Retired Australian professional-turned-media pundit Sam Groth said Osaka’s boycott was a “slap in the face” to the sport and said cutting off journalists while remaining engaged on social media was “hypocrisy”.

“Media conferences are attended by accredited members of the media, many of whom have established meaningful rapports with players,” he wrote in a column in Melbourne’s Herald-Sun newspaper on Friday.

“Social media platforms are a bottomless void of trolls and bots who are answerable to no-one and have few policies of decency.”

“If it was just more time after that big loss, so that you can compose yourself and digest and cry out of the spotlight … ,” she said.

“If it’s on an occasion when you are so upset it’s difficult that you’re almost forced by the rules to do it so quickly.”

Former world number one doubles player Rennae Stubbs, an ESPN commentator, also backed Osaka, tweeting that it was “an amazing moment” for the media to listen to the players and understand “how tough it is for many of them”.