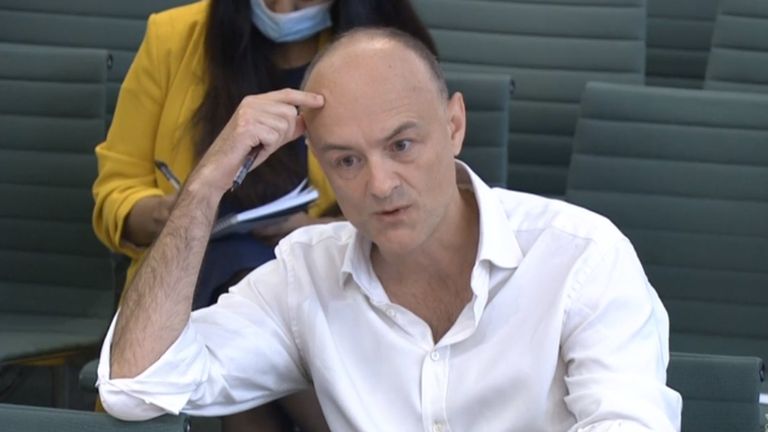 Captain hindsight. It is one of those phrases Boris Johnson likes to shout across the Commons chamber at Keir Starmer during PMQs, a phrase Health Secretary Matt Hancock has lately started trotting out whenever anyone asks whether he took the right decisions in the face of the coronavirus.

At best it’s a frustrating insult, at worst it’s schoolboy name-calling. But hindsight is one of those powerful drugs which makes a rational analysis of what went wrong, at each stage, in Britain’s coronavirus policy, incredibly difficult.

With hindsight it is clear, as Mr Cummings laid out in pretty brutal detail in the marathon hearing yesterday, that many mistakes were made. It is hard to say with any degree of accuracy how many lives were lost as a result, but clearly many were. It is clear that many of these mistakes could have been avoided. Some of this clearly stemmed from dysfunctional administration. Some of it clearly stemmed from groupthink.

But some of it also stemmed from the fact that often what seems obvious with hindsight was not obvious at the time. One of Mr Cummings’ claims was that the government should have locked the country down earlier in September, which in turn would have prevented the December/January wave which killed even more people than the first wave of the virus.

In hindsight, he is clearly right. But being right in hindsight is not always the same as being right at the time. Painful as this is, let’s go back and think for a moment, step by step, about what was happening in the UK then.

In September, cases began to rise. This was happening at a far more gradual rate than in the early days of the disease. Certainly enough to cause some concern among epidemiologists, but this hardly looked like a red alert. Indeed, the UK was following more or less the same path as was seen in France and in Spain.

In late September the government’s chief scientific adviser Sir Patrick Vallance produced a projection that showed that if cases took off in the following weeks they could hit 50,000 cases a day. The government imposed a set of restrictions – short of a national lockdown – such as the “rule of six”, curfews and local lockdowns.

September and October came and went. Cases continued to rise, but the growth rate remained slower and, seemingly, more contained than in the spring – slower, certainly, than Sir Patrick’s projection. But the growth rate was nonetheless fast enough to cause concern. As October turned to November the prime minister announced the second national lockdown in England.

Cases rose some more – but while hospitalisations and deaths also rose, the growth rates remained less extreme than they were in spring. Cases did not hit 50,000 a day in October, as Sir Patrick’s projection had warned. Nor did they hit that rate in November. The highest they went, on the basis of a seven-day average, was around 25,000 a day by mid November.

Now, Mr Cummings’ account – and for that matter the account of many intent on criticising the government – elides what happened next. But it matters enormously. Because what happened next is that cases began to fall. Case growth dropped, such that by early December cases were nearly half their November peak.

Quite how you determine when a wave of infection begins and ends is more art than science, but by at least some measures, the second wave was over.

Except that this story isn’t over. Not in the slightest.

According to Public Health England’s database, the first sequenced case of B.1.1.7, what later became known as the Kent variant, was detected on 1 October. We now know that the variant began to build relatively quickly after that, but even in a country with more genomic sequencing than anywhere else in the world, the incidence was still dwarfed by the other existing strains of COVID-19. It wasn’t until late December, in fact, that it was formally deemed a Variant of Concern.

B.1.1.7, we now know, is more transmissible than other variants, though not significantly more lethal (contrary to some reports at the time). But even at the time the second lockdown ended in early December, it was still only a tiny fraction of cases – 0.5% or thereabouts. This, it’s worth saying, is all with hindsight. At the time, the data on variants was significantly more shaky.

What happened next is well established. In the second week of December, cases began to pick up in the UK. Within a couple more weeks they were rising sharply. By 19 December the variant was of such concern that Boris Johnson gave a press conference and imposed restrictions on families over Christmas. By the beginning of the new year, a third lockdown was imposed and the third, the most awful, wave of infections and deaths was upon the UK.

It’s important to note the sequencing here. The variant was the primary cause of the sharp rise of infections during the winter period. The variant began spreading only at the tail end of the autumn lockdowns. Had it not been for the variant, it is quite possible the UK’s case numbers would have carried on falling, or at worst have plateaued through the Christmas and new year period.

Counterfactual history of this sort is a tantalising and often futile exercise, but in this case we do have a counterfactual of sorts: France. For France’s case trajectory was rather similar to the UK’s for much of this period: up in September, up again in October and November and then down slightly in December. But unlike the UK, France saw fewer cases of the Kent variant, at least initially. And what happens next is instructive.

French cases remained high through December and January. Only in March did they begin rising sharply, as more of the variant reached the country. But the two epidemic curves suddenly diverge from each other in December as the Kent variant takes hold in the UK, but not in France.

Now, in hindsight it is plausible that one of the reasons the Kent variant developed in the first place is that there was a fair bit of COVID-19 around in September – in other words the two episodes are linked. Perhaps.

What is certainly clear in hindsight is that part of the reason the Kent variant was so lethal in the UK was that the health system was already strained in November and December, because of the relatively high number of cases during the autumn.

But in a parallel universe where the Kent variant happened in another country, it’s also entirely plausible that the winter could have looked quite different – and that the government’s policy might have looked pretty well judged.

This is the problem with hindsight. One of the critical elements of Mr Cummings’ testimony yesterday concerned precisely this question. When Greg Clark pointed out that NERVTAG, one of the key epidemiological committees advising the government, only sent warning of the Kent variant to the government on December 18 (a day before the prime minister cancelled Christmas), Mr Cummings said:

“Although the specifics about Kent may only have come up at that time, it was certainly the case that variants were being discussed in September. I had scientists say to me in September that one of the reasons we’ve got to not let this get out of control is the problems with variants.

“If I knew about it in September that means that other people definitely knew, were talking about it well before then.”

Mr Clark: “But not a specific variant – it was a concern about variants in general?”

Mr Cummings: “I can’t remember the detail of my conversations now on variants but it’s certainly the case, I had specific warnings from scientists, and not just any old scientists, scientists who’ve been repeatedly proven right, so I took what they said particularly carefully.

“I was looking back over the whole thing and doing a kind of scorecard of who’s been right about this and who’s been wrong about it. The people who were right about it said to me in September, watch out for this variant, it could get very nasty.”

Subscribe to the All Out Politics podcast on Apple Podcasts, Google Podcasts, Spotify, Spreaker

Given the variant itself didn’t exist – at least in PHE’s database – until October, this is odd. It is hard not to conclude that Mr Cummings’ testimony about this period is heavily influenced by that most seductive of all drugs, hindsight.

This doesn’t mean the conclusions are wrong. It doesn’t mean mistakes were made. But it is worth bearing in mind all the same.