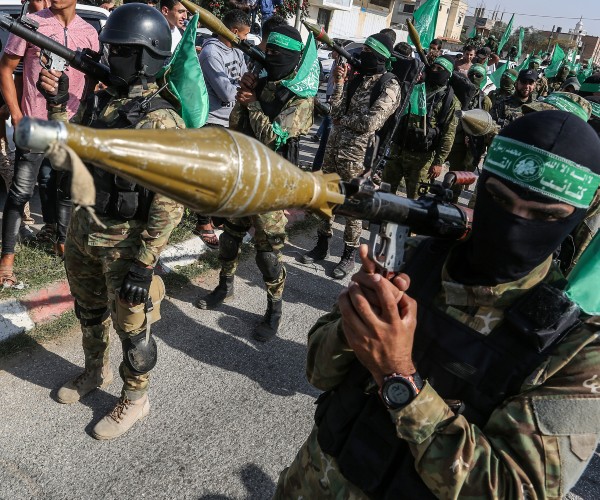 With each passing day, more and more young liberals are increasingly determined to condemn Israel, while defending defending Hamas.

With time and introspection, I have come to understand the why and wherefore of this very disturbing and — to my thinking, very misdirected, growing phenomenon.

Globally, there are many Israel-haters.

To begin with, there are Iran and Syria. There is Islamic Jihad, just to name a few of the many popular groups even countries bent on the destruction of the Jewish State.

But Hamas, Hamas has been singled out above all others. Hamas is the chosen group, the terrorist organization young people have chosen to advocate for way and above other Palestinian causes and groups.

Why? The answer is simple, scary, and all about hate.

That Hamas hates Israel more than any other group.

The hatred that these young people express is so visceral that the group that they believe can cause Israel the most harm, the most damage, that might even succeed at pushing Israel into the sea, is the group to root for.

Erroneous as it is, to these young people , Hamas is the authentic Palestinian movement.

Other Palestinian groups, they believe, have abandoned their pure cause for practical, political, and financial rewards.

Hamas challenges Israel more than any other group.

Hard to imagine but these young adults who, by definition of their liberalism, are all feminists and fight against sexism, actually say (with a straight face) that their liberalism informs their Palestinian advocacy.

They believe that their support for Hamas is rooted in their liberal ideology.

They believe that every liberal and all feminists should join them in their support of Hamas and condemnation of Israel.

To these young thinkers fighting for equality for feminism while fighting against sexism is also fighting racism and fascism.

What they fail to understand, what they refuse to understand, is that Hamas is not a liberal movement. Hamas does not in any way embrace any of the values they embrace — except for Israel hatred.

Implicit in Hamas ideology is the exact opposite of liberalism. Hamas is religious fanaticism. Hamas is anti. Anti-women. Anti-freedom. Anti-Western.

Almost everything Hamas embraces is the antithesis of current Western liberal culture.

I’m not just referring to the role of God or Allah in Islam and Hamas. Look at the role of women in Hamas’ Gaza.

A woman is not equal under their law, nor is she equal in a Hamas court.

A woman cannot wear what she wants.

She is forced, to wear a hijaband a head scarf.

A woman cannot go to the beach and swim, nor can she drive.

This is reflective of “guardianship laws,” and they are the same laws that exist in Saudi Arabia. This Islamic legal system is called Shariah and in their court a ruling came down that a woman needs permission from her guardian (either her father, husband or older male relative) to go out alone. That permission must be given according to the court ruling and submitted and registered in the court.

When the ruling was challenged, Hassan al Jojo, the head of the Supreme Judicial Court in Gaza, dismissed any critique. He described the ruling as “balanced,” and in step with Islamic and civil law. He blamed social media saying that social media was making “artificial and unjustified noise” about the ruling.

This ruling is not some arcane historical item dredged up to make Hamas and Islam look bad. This ruling was issued on Feb. 14, 2021.

If they paid attention, if they fact-checked, if they thought about what they were supporting, most —  probably all —  liberals would be appalled to know that they are advocating for this group.

Anti-woman and oppressive. This is mainstream Hamas.

This is not Israel’s fault. But Israel does have to live alongside Hamas.

And these young, misinformed, liberals are not making it any easier.

These young liberal voices are loudly raised in the court of public opinion.

Unfortunately, they will not be swayed by the truth.

Micah Halpern is a political and foreign affairs commentator. He founded “The Micah Report” and hosts “Thinking Out Loud with Micah Halpern” a weekly TV program and “My Chopp” a daily radio spot. A dynamic speaker, he specializes in analyzing world events and evaluating their relevance and impact. Follow him on Twitter @MicahHalpern. Read Micah Halpern’s Reports — More Here.