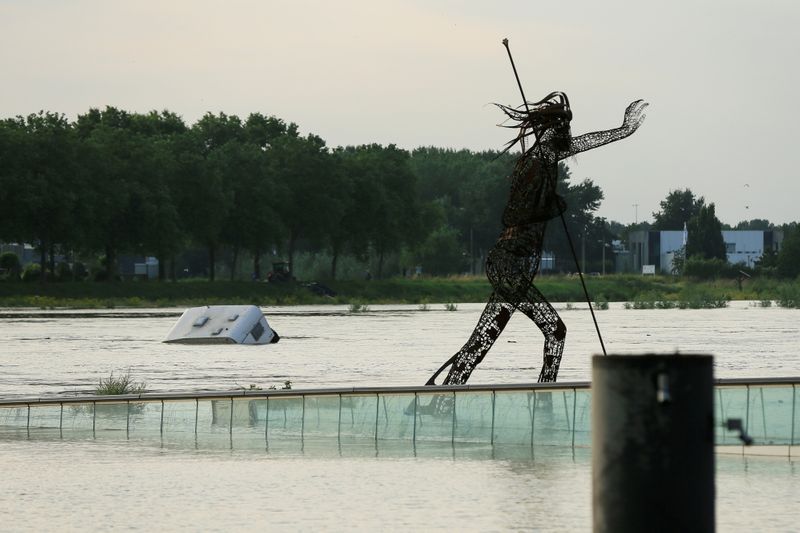 FILE PHOTO: A caravan floats down the river Meuse, also known as Maas, as it continues to rise, in Venlo, Netherlands, July 16, 2021. REUTERS/Eva Plevier

AMSTERDAM (Reuters) – Emergency services in the Netherlands remained on high alert on Saturday as overflowing rivers threatened towns and villages throughout the southern province of Limburg.

Tens of thousands of residents in the region have been evacuated in the past two days, while soldiers, fire brigades and volunteers worked frantically throughout Friday night to enforce dykes and prevent flooding.

Flooding in neighbouring Germany after massive rainfall this week has killed at least 133 people, while at least 20 have died in Belgium.

The Dutch have so far escaped disaster on that scale, and as of Saturday morning no casualties had been reported.

But the rising waters have left a path of destruction across the region and the situation remains critical, local authorities said.

Water levels in rivers around major cities such as Venlo and Roermond reached record levels early on Saturday and were not expected to drop before late on Sunday, the authorities said. That is threatening to saturate dykes and other water protections.

Many streets in and around Roermond have flooded, news agency ANP reported.

The high waters, fed by the rainfall in Germany and Belgium, will flow through the Netherlands in the coming days towards the North Sea on the western coast of the country.

Protection along the Rhine and Meuse rivers in regions upstream is generally expected to hold, but experts warned that the current situation remained very difficult to predict.